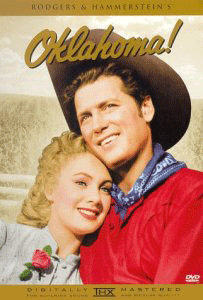 Sixty years go, the sound track from the Rodgers & Hammerstein musical, “Oklahoma,” was the first album certified by the Recording Industry Association of America (RIAA) as gold.

According to the Association’s website there was a special ceremony at the Oklahoma History Museum on July 10th commemorating the first ever gold album turning 60.

Gov. Mary Fallin accepted the commemorative plaque on behalf of the state and issued a proclamation that celebrated the “major milestone in music history.”

It was on July 8, 1958 when the RIAA, the organization which administers the Gold and Platinum Awards Program, bestowed the prestigious honor on the album.

Songs recorded on the album included “Oh, What a Beautiful Mornin” and “The Surrey With the Fringe On Top” as well as the timeless classic “Oklahoma”.

In it he talks about the partnership of Richard Rodgers and Oscar Hammerstein and how they came together to write the musical that would become “Oklahoma.”

It was based on a musical from 1931 called “Green Grow the Lilacs.”

They had known each other for years so their official business partnership began with a simple handshake.

They then did something radical for writers at the time. They formed their own music publishing company.

Next, they were the first to mass produce the cast performance as an album in such a successful fashion.

What set “Oklahoma” apart from other Broadway shows at the time was the way it opened.

Most musicals opened with loud exciting music to catch the audiences attention. This also allowed late comers to enter the theater and settle into their seats without missing anything of the story line.

“Oklahoma” opened with a simple scene with someone on the stage sitting quietly and unassuming.

The whole production was more than just a musical, it was actually a well written story that conveyed the emotions and thoughts of the characters through songs and dance in a way that had never been done quite so well before.

Another uniqueness of Rodgers and Hammerstein’s collaboration was that the writing of the lyrics was finished before the music was composed.

Most writers of the time composed the music first then later wrote the lyrics.

Hammerstein wrote the lyrics and Rodgers penned the music.

Rodgers said that Hammerstein’s lyrics were beautifully written even without a tune.

The two seldom worked in the same room.

The now famous Broadway hit opened on March 31, 1943 to a less that packed out crowd.

“Oklahoma” ran for 2,212 performances and has been performed by music companies, colleges and high school students around the world.

Rodgers and Hammerstein won a Pulitzer Prize for the production in 1944.

The play wasn’t made into a film until 1955. The recording was made shortly thereafter thus beginning the album’s journey to gold status.

Interestingly, “Oklahoma” was one the first albums that used the original cast members to sing the songs on the recording.

It’s amazing that an album about a romance on the prairie  was one of the first to be certified gold.

It’s also amazing that album is about our amazing home state Oklahoma—where the winds come sweeping down the plain.