What a blessing a week of forecast sunshine is! A few weeks ago my daughter Toby and husband Jeff Ross made their annual trip up for the “Snake Hunt”. Although it was very cold and windy, the little ones, Colton, Ryder and Grady loved it!

All the rides and watching the snake handlers were a high point but the real excitement was when Ryder purchased his first pet. With his birthday money, he bought a small Red-Eared turtle. The little critter still lives in Frisco, TX and his name is D.J. and I am told, he is a Cowboy fan! Well, what about turtles…….

We don’t see many chickens crossing these days but how about turtles? If you are like me and wonder why this time of year we see so many turtles of every variety crossing the road, we may be able to help.

I’ll bet many of you did not know that World Turtle Day is May 23, so I wanted to remind everyone to be conscious of these very special animals that share the roads with us!  Where we live, we are surrounded by ponds, creeks and lakes. But there are highways and roads that also surround these waters. This often means that native turtles do not fare well when they need to cross the busy roads. 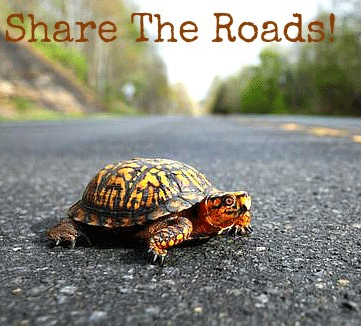 April through October are the months that you will see many turtles actively crossing roads in Oklahoma.  They do this for many reasons; in the spring, males are looking for females and territory to call their own.  May and June is nesting season.  At this time, egg-bearing female aquatic turtles leave the water to find terrestrial nesting sites, and this often requires crossing a road.  During late summer and fall, hatchling turtles are digging up from nests, looking for water.  Then later in the year males and females are heading to safe places for winter hibernation. Other times they will migrate to find a more suitable spot to live.

Although pre-dating dinosaurs by several million years, turtles everywhere are disappearing quickly today. The “hide in my shell and wait it out” strategy has enabled turtles to weather the geological changes leading to the extinction of countless other species. However it has proven of little use in surviving the peril posed by fast moving trucks and cars.

The only way we can help them in this situation, if it is safe to do so with existing traffic, is to pull over and slowly approach the turtle and gently pick it up by the shell, midway on both sides, and carry it to the other side of the road and set it down facing in the direction it was going. You might want to know that normally a turtle, when picked up from the ground, will empty their bladder, so don’t drop it when this happens!

The worst threat to snapping turtles is vehicle traffic. Each year many females get killed in their search for nesting sites. Often vehicles will not stop or will even deliberately hit turtles because snapping turtles are disliked by many people. Nests on road sides and in gravel pits are often destroyed by vehicles and road grading. Hatchlings on their way back to the water are frequently run over.

However, if you are going to relocate a snapping turtle, I would be very cautious. They can be very aggressive and have a very long neck; they can bite nearly halfway back on their shell and are very quick. I would suggest you use a stick or something to prod them along or push them to the other side!

Whatever the reason a turtle is traveling, their destination can take him or her miles away from where they live.  As humans continue to encroach upon their habitats, turtles will be crossing more roads.  Research has shown that aquatic turtle populations across the United States have uncommonly high proportions of males because so many female turtles are being killed on roadways.  Turtles have a long lifespan, take a long time to reach sexual maturity, and have low survivorship when newly hatched.  Because of this, turtle populations suffer greatly!  With turtle populations requiring high levels of adult survivorship, every individual is important to a population’s stability.  This concern is even greater in recent years because many U.S. turtle populations are becoming displaced and progressively smaller.

We may never know for sure about the chicken! But hopefully this will help in your understanding of why we see so many turtles crossing the road! Get out and enjoy our great Oklahoma outdoors!