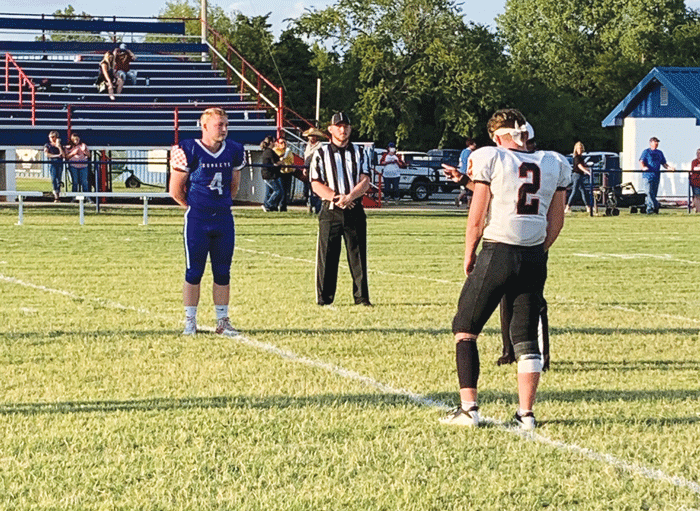 Things did not start well for the Ryan Cowboys last Friday night in the season opener at Bray-Doyle.

And, things got increasingly worse as the Donkeys buried the Cowboys, 60-6, in a game halted at the half because of the 45-point mercy rule.

The Cowboys will be back in action tonight (Thursday) when they play host to the Geary Bison. Kickoff is set for 7 p.m. at the Bob Givens Sports Complex.

Geary fell to Canton, 50-16, last Friday night. The Bison are 0-1 for the season and this will be the first meeting between the two schools.

The contest with Bray-Doyle started badly as the Donkeys intercepted a deflected pass on the Cowboys’ first offensive play and returned it for a score.

On the Cowboys next possession, they were forced to punt and the Donkeys returned the punt for a score.

Bray-Doyle proceeded to score on seven of nine offensive possessions.

The Donkeys lost a fumble on one possession and took a knee to end the game on the final possession.

The Cowboys found themselves in a 16-0 hole after those first two scores, but the Cowboys were able to put together their only scoring drive of the night on the next possession.

The Cowboys went on a six-play, 57-yard drive for the score that included one play that lost 10 yards.

The big play in the drive came on Grayson Tomberlin’s 57-yard pass to Julian Rodriguez that set the Cowboys up at the Donkey 10.

Three plays later, Tomberlin scampered in from nine yards out for the score with 8:02 left to play in the first quarter. The run for two points failed, but Ryan had cut the lead to 16-6.

The rest of the night was filled with frustration for the Cowboys that was created by poor tackling, dropped passes, failure to convert on fourth downs and injury issues.

Trailing 34-6 at the end of the first quarter, the Cowboys opened the second frame by moving to the Donkey nine.

Racen Williams scrambled into the end zone from nine yards out, but the Cowboys were flagged for holding and that would be the final scoring threat for the Cowboys in the contest.

The Cowboy defense had no answer for Bray-Doyle’s Tyler Anderson who rushed 14 times for 185 yards and scored four times in addition to returning a punt 69 yards for a touchdown.

The Cowboys were unable to generate a lot of offense during the game, but Tomberlin did pass for 151 yards. However, the senior quarterback playing with a knee injury, was only nine of 32 passing.