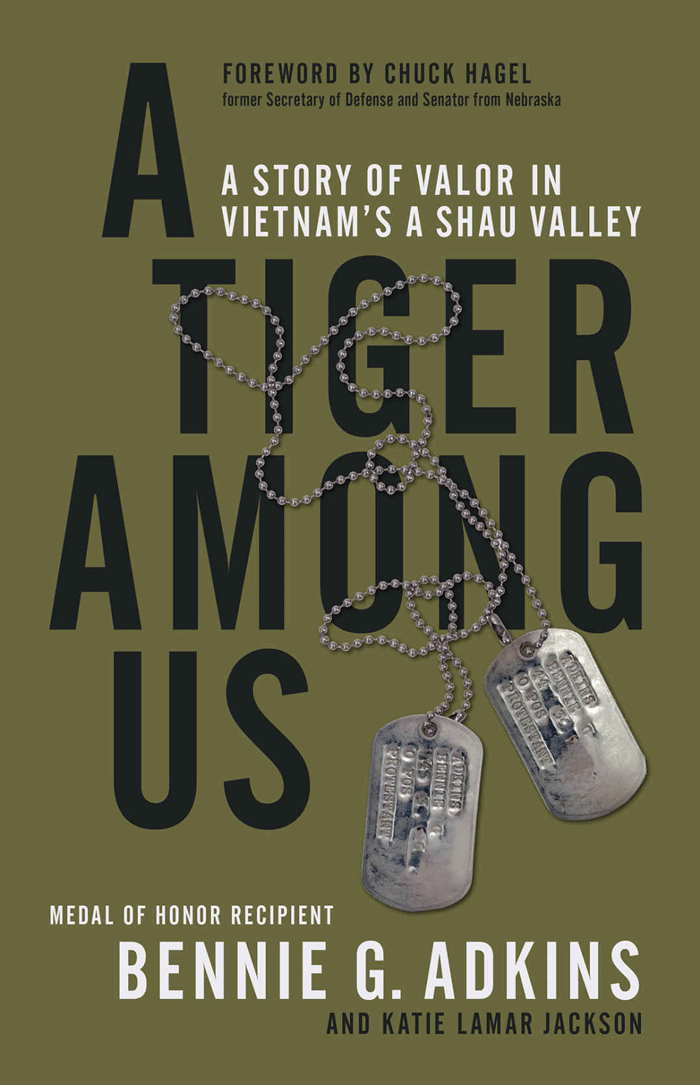 He’s a relative, a friend, a war hero, a Congressional Medal of Honor winner, and now he’s a published author.

Bennie Adkins, whose statue stands in Veterans Park as a reminder of the acts of valor on the battle field, has recently published A Tiger Among Us.

It’s a soldier’s story. It’s his account of the events that would one day lead to President Obama awarding him the Medal of Honor. It’s the story of bravery in Vietnam at a place called A Shau Valley.

It’s a first person account of an atrocious battle that cost some of Adkins’ fellow soldiers their lives.

In the preface Adkins relates what the Medal of Honor means to him and why he wears it proudly.

He writes, “I was awarded the Medal of Honor for my actions during a battle in the Vietnam War, but I wear it in honor of others. I wear it for the more than fifty million men and women who have served our country in both times of war and peace. I wear it to remind us all of their sacrifices and how so few of them have worked so hard to keep so many of us safe throughout our nation’s history. [Today, our military represents just one percent of our nation’s entire population.] I also wear it to honor the 2.7 million Americans who fought in Vietnam, especially the more than fifty-eight thousand who died there, twelve hundred of which never came home.

“But most important of all, I tell them that I’m honored and humbled to wear the Medal of  Honor not for myself, but for the sixteen other men who fought with me during the Battle of A Shua in March 1966, five of whom paid the ultimate price.”

In the prologue he relates the story for which the book is named.

They had found a place to rest for the night after he and his 11 special forces companions had spent 38 hours fighting against an enemy that outnumbered them 10 to 1.

Out of the 17 Special Forces soldiers stationed at Camp A Shua these 11 were the only ones still alive.

Their orders were to evacuate. The plan turned out to not be as simple

as it sounds. The enemy was attempting to prevent their evacuation and plans had to be changed. Adkins was forced to improvise.

Finding a secure place on the high ground seemed like the best solution.

A rescue attempt was made, but one of the helicopters was shot down.

They would be spending another night in enemy territory.

It would be the next day before another chance of being lifted out could be attempted.

It was during that long lonely night that they encountered an Indochinese tiger.

The book relates a captivating story that readers will have a hard time putting down.