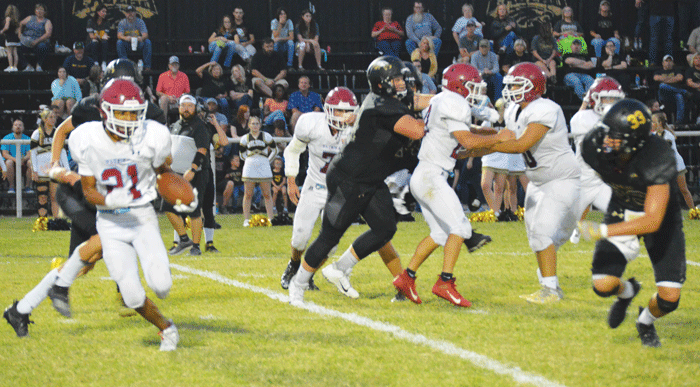 Waurika rebounded from its season opening loss to Laverne in convincing fashion with a 54-6 victory over Wilson last Friday night at Wilson.

The Indians, 3-0, have defeated Tipton, Destiny Christian and fourth-ranked Cherokee.

Waurika really had little resistance for the Eagles from Carter County as Waurika was able to score on big play after big play in the contest that ended with nine minutes left in the third quarter.

Waurika opened the scoring when Treyton Torrez found Octavio Gomez for a 12-yard completion. Kevin Garcia ran for the two points and with 9:08 left in the initial quarter, Waurika led, 8-0.

Wilson answered with its only score of the night. Michael Whatley caught a 24-yard scoring pass from Michel Cain. Waurika stopped the two-point conversion and with 3:19 showing on the first quarter clock, Waurika held a 16-6 advantage.

On the next possession, Torrez got his first touchdown of the night on a 57-yard run. The Waurika quarterback also ran for the two points and with 3:19 left in the quarter, Waurika led, 24-6.

Waurika added a pair of scores in the second quarter.

Garcia scored his second touchdown of the evening on a 19-yard run and he added the two-point conversion to put Waurika in front, 32-6, with 9:44 left before intermission.

Torrez scored again – this time on a one-yard plunge. Trent Arellano added the two point conversion and Waurika was in front, 40-6, with 6:02 before halftime.

K. Garcia picked up the touchdown on first down from 27 yards out and after Torrez ran for the two points, Waurika was in command with a 48-6 advantage.

Matt Arriola closed out the scoring for Waurika with a 19-yard jaunt at the nine minute mark that ended the game because of the 45-point mercy rule.

Torrez led the Eagles in rushing with 170 yards on just 13 carries. K. Garcia was also over 100 yards for the night with 108 paces on just six carries.

EAGLE FLIGHTS: This was the 77th meeting between Waurika and Wilson and Waurika leads the series, 54-20-3….It is possible they two schools meet in the two years where a complete schedule is unavailable…Waurika has now won five games in a row against Wilson. The third longest winning streak in the series that dates back to the first meeting in 1921….The 54 points score by Waurika is the fourth highest total in the series with last year’s total of 62 being the top scoring mark against Wilson….The upcoming contest with Shattuck will be the second meeting in school history with the Indians taking a 25-8 victory in a 1988 playoff game.