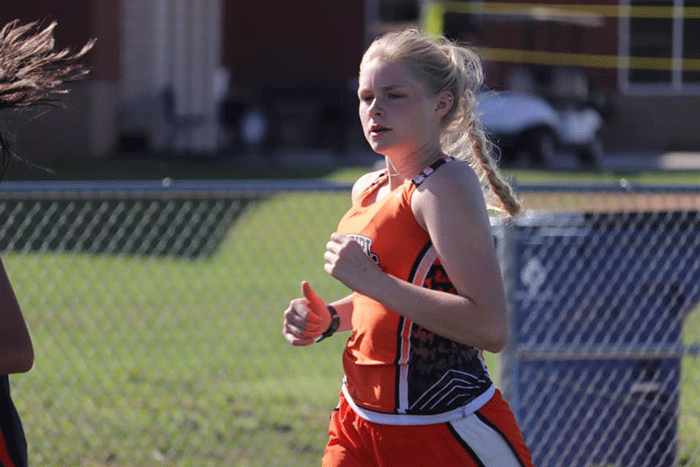 ….Alicen Williams the only placer for Cowgirl track squad at Waurika and V-A

Grayson Tomberlin picked up his first gold medal this season in the shot put to lead a small contingent of Cowboy tracksters to a fifth place finish at Waurika’s Red River Invitational last Saturday.

The Cowboys totaled 41 points – which tied with Rush Springs for fifth place. Waurika won the meet with 122 points and Frederick was second with 100 points.

Alicen Williams was the only Cowgirl to place in an event at the Waurika meet and her totals gave Ryan eight points, which tied for 12th place in the team race with Grandfield.

A small contingent of Ryan thinclads journeyed to Velma-Alma to compete in a large field at the Velma-Alma Comet Invitational on Tuesday.

The Cowboys accumulated 10 points, which tied Ryan for 18th place in the team standings among the 29 schools that scored during the day at Velma-Alma.

Williams was also the only scorer for the Cowgirls at the V-A meet and her performance gave the Cowgirls six points, which tied them for 22ndamong the 28 teams that scored.

Ryan’s track squads will head to the Class A Regional Track Meet at Alex on Friday. The meet will begin at 9:30 a.m. and the top three finishers in each event will qualify for the Class A State Track Meet in Cherokee on May 8.

On Tuesday, Tomberlin turned in another good performance in the shot put. His throw of 39-3 was good enough for third place at the V-A meet.

Tomberlin finished just ahead of his teammate, Caleb Perrin, in the shot put. Perrin had a throw of 38-9.5, which was good enough for fourth place.

Williams was the only placer among the Cowgirls that participated in the meet at V-A.

In the 1,600 meters, Williams finished fifth with a time of 6:19.69 – which is her career best in the event and the eighth best time in school history by a Cowgirl thinclad.

Tomberlin joined Perrin in finishing one-two in the shot put to help aid the Cowboy cause.

The 3,200-meter relay team of Julian Rodriguez, Mason Adsit, Westin Jennings and Landen Alexander managed a runner up finish in the even with a time of 10:54.65.