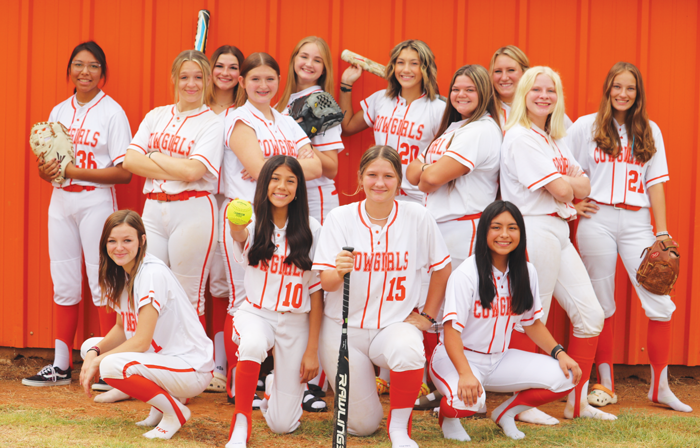 The Ryan Cowgirl softball squad is making progress, but the wins continue to elude the squad after a 9-1 defeat at the hands of Grandfield Tuesday night at Larry Ninman Field.

Last Thursday’s game with Bray-Doyle was rained out.

The Cowgirls are back in action today at the Temple Invitational Tournament.

In the first round of the 14-team tourney, Ryan will face Grandfield again today at 3 p.m.

The tourney, which features four ranked teams from Classes A & B, will conclude on Saturday.

Ryan will host Waurika on Monday and will entertain Geronimo on Tuesday on Larry Ninman Field.

In Tuesday’s game with Grandfield, the 14th-ranked Lady Bearcats sent 10 batters to the plate in the top of the third inning and scored four times to take a 4-0 lead over the Cowgirls. Three doubles and three singles led to the four scores.

In the top of the fourth, Grandfield added another run to up the margin to 5-0.

In the bottom of the fifth inning, the Cowgirls got on the scoreboard with a single run.

A leadoff walk by Jasmine Villerreal got things going for the Cowgirls and that was followed by a single by Emily Harris.

After two were out, Lirin Tucker connected on a single to score Villerreal and the deficit was trimmed to 5-1.

Grandfield answered with four runs in the top of the fifth inning. A home run, two errors, two walks and a single contributed to the big inning for the Lady Bearcats.

Ryan could not score in the bottom of the fifth and the game ended on the run-rule.

Villerreal, Harris and Tucker had the only hits for the Cowgirls, who fell to 2-8 on the year heading into today’s tournament action.