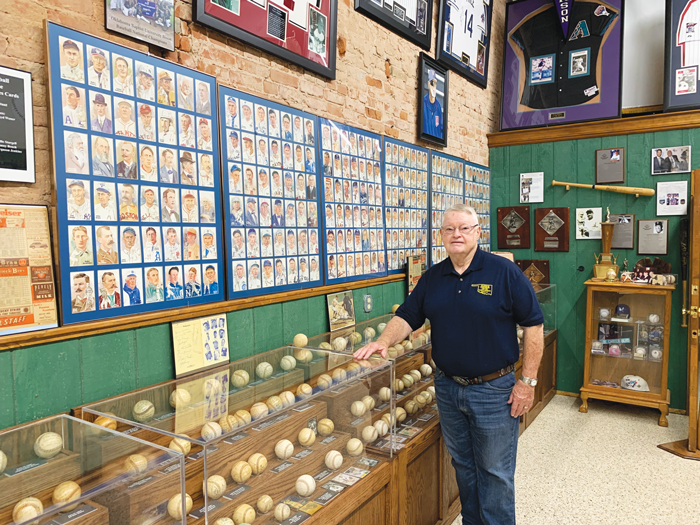 Tucked away in three buildings in historical downtown Guthrie, Oklahoma is a little-known destination for any sports enthusiast – particularly if you are from Oklahoma.

The Territorial Capital Sports Museum is located in three adjoining buildings in Guthrie. Those buildings, along with many others in the downtown area, are on the National Register of Historic Places.

And, the museum has a local connection – it was founded by and is managed by former Oklahoma high school coach Richard Hendricks – who made Ryan one of his coaching stops in his basketball coaching career.

Hendricks coached at Ryan in the 1966 and 1967 basketball seasons.

The museum features 13,000 square feet of space full of displays that feature sports artifacts and educational items related to the state of Oklahoma.

The museum is also home to the Oklahoma High School Baseball Coaches Association’s Hall of Fame and features a gallery devoted to around 50 members of the Hall of Fame.

The Oklahoma Sports Museum Association is the operator of the museum and was founded in 1993.

The purpose of the museum is to preserve Oklahoma sports history including the traditional sports of football, basketball, baseball, but there are also large displays from rodeo, the Olympics and ice hockey.

It is the largest collection of sports artifacts in Oklahoma.

The museum annually presents the Warren Spahn Award to the best left-handed pitcher in Major League Baseball. The award, created in 1999 by Hendricks, honors Spahn, who resided in Oklahoma. Spahn holds the MLB record for wins by a left-handed pitcher.

“This all began one year when I was assistant principal at Guthrie High School,” said Hendricks in a recent interview at the museum.

“I had brought in Fergie Jenkins (former major league pitcher) and Hubert “Geese” Ausbie (former Harlem Globetrotter) to speak during Red Ribbon Week about staying away from drugs and building character,” Hendricks shared.

Jenkins at one time owned a ranch near Guthrie and he pitched for the Chicago Cubs and Texas Rangers, while Ausbie is from nearby Crescent and he was part of the Globetrotters from 1961 to 1985.

“And, the idea of putting together the museum got going at that point,” Hendricks added.

The museum honors athletes from all parts of Oklahoma and teams that represent Oklahoma from the Oklahoma City Thunder to all minor league teams that have existed.

There is also a display with all the Heisman trophy winners and a statue of Olympic gymnast Shannon Miller.

“The creator of Miller’s statue did some of the work right here at the museum,” noted Hendricks, who was able to talk non-stop about the many things located in the museum.

“We have a section honoring Camille Herron from Norman. She is an ultra-marathon runner and she recently set the world record for the 100 mile race,” Hendricks said. “She is a three-time Olympic Marathon trials qualifier.”

Some of the displays go back to prior to 1900 and there is an extensive collection of baseball artifacts featuring Oklahomans Paul and Lloyd Waner – the only brother combination in the Baseball Hall of Fame that are from Harrah.

One of the most impressive displays is a collection of jerseys from many major and minor league teams – both past and present.

“This guy called me one day and said he had some jerseys he wanted to donate,” Hendricks shared. “I thought it might be seven or eight and it turned out to be 90.”

“Oklahoma has a great tradition and outstanding teams,” added Hendricks.

Hendricks has been in charge of the museum since it opened.

“It was great to be able to do this after retiring from education,” Hendricks said. “It has been a great thing for me to do.”

“I am 80 years old now and we are really hoping for a major corporate sponsor to help guarantee the future of the museum,” said Hendricks, who had coaching stops at Stigler, Ryan, Lone Wolf, Ft. Cobb, Grandfield, Cordell.

Hendricks came to Guthrie in 1976 and remained at the school until retiring in 1993 and taking over the responsibility at the museum.

Some of his greatest coaching accomplishments came in the two years Hendricks directed the Cowgirl and Cowboy basketball programs for Ryan.

He took over a girls team in 1966 that had won the Class B state title the previous year and the Cowgirls returned four starters from that squad.

“We were always battling Sterling,” Hendricks said. “We were ranked one and two all year and met them twice in the regular season – we won at our place and they won at their place.”

“We begged the OSSAA (Oklahoma Secondary Schools Activities Association) to put us in different regionals, but they didn’t,” Hendricks explained.

Sterling defeated Ryan in the regional finals that season, 42-41, to advance to the state tournament.

That Cowgirl squad finished 21-4 and won the district title and finished ranked fourth in the state.

The 1967 squad carved a 19-5 record and was also the district champion, but fell in the first round of the regional tournament.

“Both years we were one of the top teams in the state,” Hendricks said. “Our boys were not quite at that level but we had some really good players.”

“Pernell would have been a good forward, but she dominated on defense,” said Hendricks about the former all-stater that played six-on-six girls basketball.

Hendricks referred to his short stay at Ryan throughout the interview.

“We have nothing but good memories about Ryan,” noted Hendricks. “There were a lot of good people and good kids – good character kids.”

“Glen Martin (the superintendent during Hendricks’ tenure at Ryan) was really good to work with,” Hendricks said.

Hendricks and any of the dedicated museum volunteers will greet you at the door, show you around the galleries and tell you the fascinating stories of Oklahoma’s sports history and its heroes.

The next time you may be looking for a day trip – plan on visiting Guthrie and this hidden gem – the Territorial Capital Sports Museum in downtown Guthrie.