Home Editorial Freedom, the Declaration and the Press 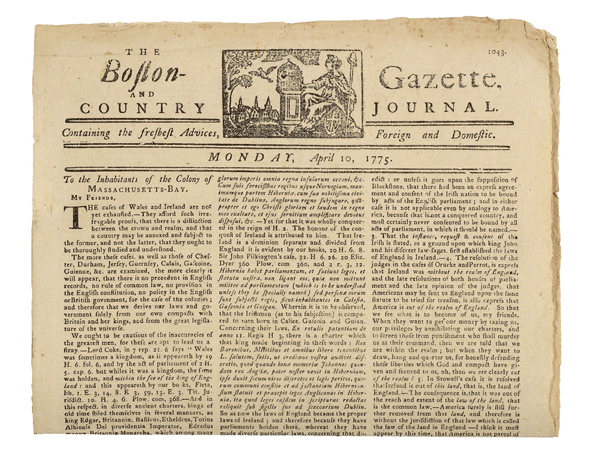 It has been said by some that the Declaration of Independence is the central document of American history.

As true as that may be, other documents helped further the cause of American independence in their own way.

Some of those documents were none other than local newspapers.

Colonist in the new world around the late 1700s were avid readers thanks to newspapers.

Some of the first continuously published newspapers in the original thirteen colonies were located in Boston.

Ironically, the first blood shed in the Revolutionary War may have actually been shed in Boston.

On March 5, 1770 British soldiers opened fire on citizens in Boston. The citizens were believed to be unarmed.

The event was widely reported by local newspapers and was notoriously known as The Boston Massacre.

Originally, the scene was captured in an engraving by an artist by the name of Henry Pelham. Unfortunately for Pelham, his close friend Paul Revere copied his engraving and took full credit. Today, it’s Revere’s engraving (artistic rendering) that is referred to as the propaganda responsible for fueling the flames of revolution in the colonies.

The graphic and volatile image was seen throughout the colonies thanks to a Boston newspaper known as the Boston Gazette (The Gazette paid Paul Revere to engrave his version of the Boston Massacre).

The Boston Gazette was started in 1719. The famous publishers Benjamin Edes and John Gill were responsible for the paper’s success from 1755 to 1775. After that date Edes was the sole publisher.

It is said by some sources that the Boston Gazette started the American Revolution.

However, it is a fact that many of the early American patriots wrote moving articles in the Gazette to inspire the citizens of Boston and readers from around the colonies to fight for their independence.

Samuel Adams, one of the many contributors,  wrote under so many pen names in the Gazette that historians are unsure of just how many different ones he actually used (it’s estimated that he used approximately 25).

The Sons of Liberty (a secret society formed to fight what was considered unfair taxes on the colonies by the British) would meet in secret at the offices of the Boston Gazette.

The paper was so hated by the British that it was on a list of establishments that were to be seized by the Crown’s soldiers when possible.

Historically, many of the famous events leading up to the revolution were first printed in the Gazette: The Boston Tea Party, The Boston Massacre etc.

Although circulation in those early days of American history would seem to be meager by modern day standards, the papers that did circulate were shared and the news spread fast!

Of course, the Boston Gazette was not the only local paper pressing for independence.

There was also the Pennsylvania Journal, the Connecticut Courant, the New York Journal, Providence Gazette and many others.

Because of Benjamin Franklin’s postal system, news spread very fast throughout the colonies.

In those days there were no televisions, iphones, ipads or the internet. Newspapers were king.

Although the newspapers may not have always been fair and balanced, they were widely read and the main source of information.

A case in point is the famous engraving by Paul Revere in the Boston Gazette.

Although the image is riveting, it is historically inaccurate and very biased against the British.

Today, some would say the end justified the means.

Regardless, you can’t deny that newspapers were the other documents that helped fuel the flames of American’s burning desire for independence.

That being said, we still give the highest reverence to the document penned by Jefferson—The Declaration of Independence.

The freedoms embodied in this document are worth dying for, and more importantly worth living for.

May our newspapers always honor that freedom.