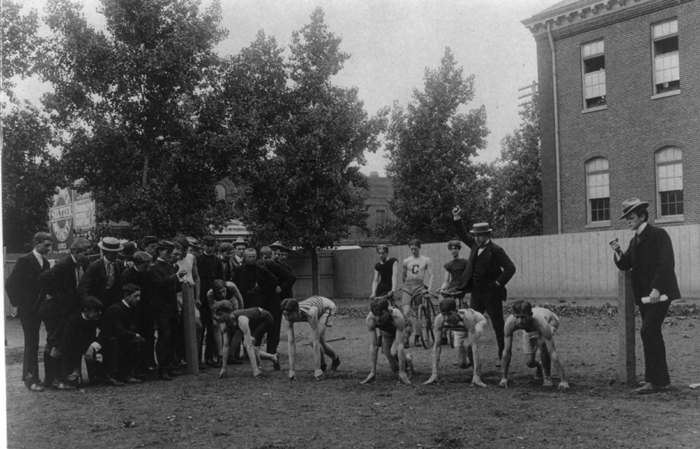 Track is one of those sports where team and individual performances are tied together.

A string of strong individual showings in a few events can go a long way in helping a team earn a meet title.

At Waurika in the decade of the 1930’s there was no shortage of outstanding individual performances.

A number of these individuals for the Eagles went on to participate in track in college. Or, track played a role in them earning a spot on collegiate football squads.

Results for the first four years of the decade are scarce, but a few performers can be identified as standouts for the Eagles.

In 1930, Charles Rhoades was a ringleader for the Eagle squads. He won the conference title in the pole vault and placed in the 440-yard dash, the mile run, the long jump, the javelin and the 880 in the county meet held at Ryan that year. He aided the Eagles to earn a team title over the Cowboys.

One of the standouts during the 1932, 1933 and 1934 track seasons was Tillie Roach. He went on to give up track and play football at the University of Tulsa.

Roach was the conference champion in the 120 high hurdles at the conference meet in 1932 and he placed in the same event as well as the 200 yard dash at the OU Invitational.

Another outstanding performer for the Eagles beginning in 1933 was R.V. Wright. He won the 120 high hurdles at OU and had the best time in the state in that event at 16.1. He went on to star in track at Oklahoma A&M, where in 1939 he was the team captain for the Aggie track squad.

R.V. Wright also ran in an invitation only 120 high hurdles race during halftime of the 1939 Sugar Bowl football game.

He was also part of the seven-man team that was so successful in 1934. Roach was on this squad along with Roscoe Long, Tubby Daniel, Elmer Wright, Fuzzy Fowler and Hurschel Sparkman.

The mile relay team of Roach, R.V. Wright, Long and Daniels was the conference champion in the mile relay with a time of 3:33.7.

Sparkman won the 220 low hurdles, while Daniel won the 440 and Fowler earned the title in the mile run and the 880.

In the 120 high hurdles, R.V. Wright set a meet record in winning the race, while Sparkman and Roach were second and third respectively. Elmer Wright rounded out the meet champions with a first place finish in the discus.

Elmer Wright eventually went on to a track career at Connors State in Warner.

At the OU meet in 1934, Roach was the 220 yard low hurdles and R.V. Wright finished second and Sparkman was third. R.V. Wright also earned the title in the 120 yard high hurdles.

Fowler was a meet champion at OU in the 880 and the mile run and Elmer Wright was the champion in the discus, setting a meet record in the process.

In 1935, fewer results are available, but Sparkman began to establish himself as an outstanding hurdler. He won both the 200 low hurdles and the 120 high hurdles at the OU meet that season and set meet records along the way. Sparkman eventually went on to run track at Oklahoma A&M.

Sparkman, Fowler and Long returned for the 1936 track season.

Sparkman continued to dominate the hurdles events, while Fowler won the mile run in every meet he participated in during the 1936 season.

Jackie Taylor, who became an outstanding athlete at Waurika, began to make his mark during the 1936 season. Taylor earned a runner up spot in the 220 yard dash and third place in the 440 yard dash at the OU meet.

At OU that same season, Sparkman won both hurdles’ events and Fowler was a champion in the mile run.

Those performances spurred Waurika to the team title in 1936 at OU.

Taylor began to dominate in the sprints during the 1937 track season. He was a county champion in both the 100 and 220 and also the shot put.

Taylor won three events – the 100, 220 and the 440 – at the OU meet which would be equal to sweeping the state title in three events today, which is rarely done. Taylor also anchored the 888-yard relay to a first-place finish for Waurika at OU.

Sparkman won the county meet in the 200 low hurdles, but finished second to teammate Rex Lewis in the 120 high hurdles.

Oral Hairston was a key member of the 1937 squad as he also competed in the hurdles for the Eagles.

During the 1938 season, Hairston took over for Sparkman in the hurdles and was nearly as dominate. He won the 120 high hurdles at the Southwestern Exposition Invitational at Fort Worth and helped Waurika to the team title.

Hairston was the top point producer at the 1938 Southern Six Conference meet as he was responsible for 15.25 of Waurika’s title-winning 83.3 points.

At OU in 1938, Hairston was the champion in the 120 high hurdles and the hop, skip and jump event. He finished third in the 220 low hurdles.

Hairston finished out his career at Waurika in 1939. He was the conference champion in the 200-yard low hurdles and finished third in the 120 high hurdles. He also won the pole vault that season at the conference meet. Waurika won the 1939 conference title in overwhelming fashion.

These men and a number of others were the people responsible for Waurika becoming the “track capitol of Oklahoma” during the decade of the 1930’s.