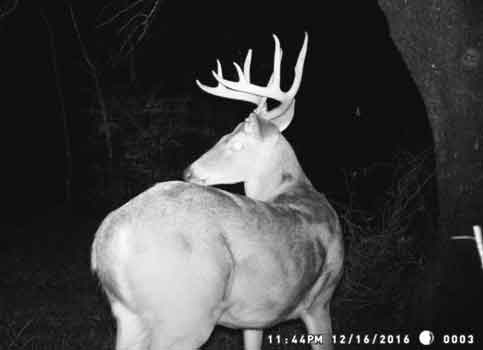 The cooler temperatures of the last week and this past weekend being the first full weekend of archery deer season signaled the arrival of a special time for bowhunters. I have been practicing with my bow and getting familiar with my equipment but the cool nights and the sound of crickets finally spurred me into the woods! So, I decided that Monday morning I would kick off my quest for a nice buck in the 2017 season.

I have had feeders and cameras out for over a month and a half but with very limited success. If I discount and delete the pictures of hogs, turkeys, raccoons and an occasional black cow, it left very few pictures. However, after a month, I am seeing several very small bucks and does with fawns on a regular basis. Hopefully, with more fall-like weather on the way, the big boys will  start moving more and thinking about the rut. It’s still early but I’m trying to be optimistic.

So, 4:30 Monday morning I rolled out of bed for my first cup of coffee. It’s at these times I question my sanity or my commitment. After the caffeine kicked in it was easier to become halfway excited. I had laid out my gear the night before and got dressed as I hurriedly ate a banana and bar. I loaded my bow and backpack on my Honda Pioneer; I was only going for an early morning hunt so I traveled light.

It was a short ride to the creek from my house and as I pulled up to where I park, under a couple of mesquites, I sit a moment to let the woods settle down. The moon was still bright from the Harvest Moon of last week and cast a gray light over the woods. I relaxed a little and enjoyed the moment. The air was cool and the wind relatively light as I grabbed my flashlight and backpack and began the walk to my stand.

I hadn’t gone but maybe a 100 yards through the woods when I thought I heard something moving off to my right. I turned off my flashlight and stood motionless. I certainly didn’t want to spook a deer, but surely they were still out in the fields feeding.

Then the sound of movement became louder as if was coming closer. Surely this wasn’t a deer-whatever it was apparently had no fear of me! I shined my flashlight in the direction of the noise and then it stopped. No sound at all, the only thing I could hear was my heart and my shallow breathing.

Then I hear a stirring in the leaves and the snap of a twig and an armadillo ran from behind a tree right in front of me. I almost laugh until I hear a loud crash and the sound of something big running away, crashing  through the woods! I shined the light in the direction of the noise and it ended abruptly. I thought it must have been cattle or a large group of pigs but it sounded like a single set of footprints.

At this point I could see a slight bit of pink in the east and I knew I had to hurry to get to my stand. My nerves were a little on edge but I moved as quickly as I could to my stand. I climbed into my stand, pulled my bow up and settled in and readied myself. Birds were beginning their morning activity as they flitted from branch to branch chirping. Without warning the birds erupted from the brush. Then I heard the noise again, heavy slow footsteps behind me and the sound of limbs breaking.

All I could think is this must be a monster buck. I could only see about 20 to 30 yards in the predawn light. But I waited, trying to find this buck; it had sounded so close! But the noise just ended. I then began to wonder what it was, because it had sounded just like the noise I heard coming into the woods.

The sun was getting closer to coming up and I could see a little better now. Several squirrels were chasing each other around in the trees and I relaxed as I watched them play. Then movement caught my eye, something was moving very slowly through the brush towards the feeder. It was certainly no deer and I didn’t think it was human, it looked very large in the predawn light! My imagination was getting to me. I couldn’t make it out. Then it dropped it’s head toward the ground or bent over I couldn’t be sure.

Fortunately “or not!” the feeder went off and started slinging corn. The mystery creature exploded back through the brush and crashed it’s way out of sight.

At this point my nerves were shot and my imagination was in overdrive. I begin to wonder if Bigfoot was real.      By that time I decided it was time to call it a day and I had experienced pretty much everything but a deer hunt!

As I lowered my bow to the ground and grabbed my backpack to climb down the ladder, I turned around, took one step and heard a loud crashing footstep again! As I looked up I was staring eye to eye with the biggest, mangiest horse I had ever seen! I started laughing so hard I thought I would fall off the ladder!

Until next week, get out and enjoy your Oklahoma!