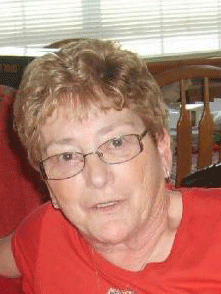 On May 19, 2018 Patricia A. “Pat” (DeHart) Henderson went to be with her Lord and Savior. Patricia was born November 2, 1944, to Lawrence and Mary (Zoolosmanian) DeHart. She was the third of seven children She married Richard C. Henderson August 28, 1968. They were blessed with two children. Richard passed away July 15, 1989. On December 29, 2000 she married Jerry L. Henderson. From this marriage she was blessed by gaining three bonus daughters. Jerry passed away April 13, 2014.

Pat was happy when family and friends visited. She loved her family and enjoyed cooking for them. She worked as a nurses aide at Mercy Memorial Hospital in Ardmore for twenty-seven years. After retiring she worked as a caregiver. She was a Baptist.

Patricia was preceded in death by her grandparents, her parents, and her brother Richard DeHart

Funeral services will be at 11:00 AM, Thursday, May 24, 2018 at the Graham Baptist Church in Graham, OK with Raymond Norton officiating. Burial will follow in the Graham Cemetery in Graham under the direction of Dudley Funeral Home in Waurika. Visitation will be 12:00 noon to 8:00 PM Wednesday, May 23, 2018, at the Dudley Funeral Home Chapel in Waurika with the family receiving guests from 6:00 to 8:00 PM. Condolences may be sent to the family at www.dudleyfuneralhomes.com.