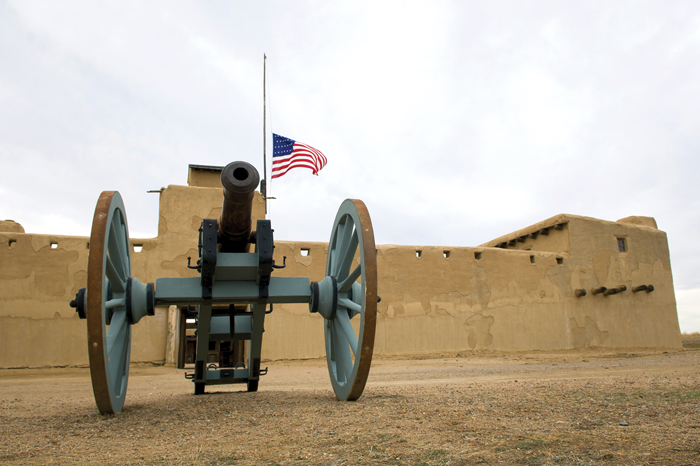 Many of the early settlers of Jefferson County came across the Red River from Texas. A great many of them came from the Spanish  Fort area of Montague County, south of Grady. Spanish Fort is an interesting place. It and the area in Jefferson County across the river from it were the site of the early Wichita Indian villages known in the history books as the “Twin villages” of the Wichitas. Some authorities estimate that there were 4,000 Indians living in the villages, which were visited by early Spanish and French explorers. The Spanish called the Wichita “Taovayas” and also the “Nations of the North”. The French called them the “Panni Picu”, or “Painted Pawnee” because they were often tattooed and were related to the Pawnee. The “Nations of the North” were feared because the Wichita and their allies, the Comanches, often raided Spanish settlements in Texas. They also traded with the Spanish though. The old “Spanish Road” between Santa Fe and Louisiana, used often by traders in the 1600’s, passed along the Red River on the Oklahoma side of the villages.

The name “Spanish Fort” was a misnomer, given to the site by the early settlers of North Texas, because of a log palisade which was left after the Wichitas abandoned the area in the early 1800’s. The “fort’ was probably built about 1718, by the Wichitas, with the help of early French traders who came to the area in the early 1700’s, from Louisiana, trading with the Wichitas, who were farmers and traders themselves. They became allies of the French, who traded and lived with them, against the Spanish, who wanted to build missions and enslave the Indians, as they had many tribes in Texas  as well as New Mexico, Arizona and California.

In 1759, while Spain and France were at war in Europe, the villages, later named San Bernardo and San Teodoro, participated with the Comanches in a raid on the Spanish missions at San Saba, Texas, Stealing captives and horses, and killing several individuals, including soldiers,k priests, settlers and “friendly” Spanish decided to retaliate. They sent Colonel Diego Parilla to conquer the Indians with a troop of about 500 men, armed with muskets and some small cannon. The army had several hundred Indian (probably Apache) allies, but when they got to the villages, they found the log fort was occupied by several thousand Indian braves, also armed with muskets, flying a French flag. The braves came out of the fort on horseback, firing muskets and bows and arrows. The battle was short and the Spanish were defeated, rapidly retreating and reportedly losing their cannon in the Red River, and the victory gave the French the claim that their territory extended to the south “cut” bank of the Red River, and this later was established by treaties between France and Spain, eventually was adopted in the Louisiana Purchase Treaty, and is now the basis for the border between both states, as well as the Federal government and the Choctaw and Chickasaw nations).