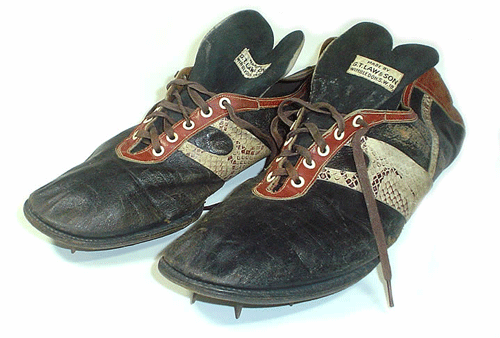 When you write about past things, you never know what memories it might invoke in the minds of people.

In a recent article about Waurika track, one of the outstanding athletes mentioned was Hurschel Sparkman, an outstanding hurdler for the Eagles in the 1930’s.

A cousin of Sparkman made a point to reach out and share a few more stories about this family that had deep roots in Jefferson County.

Hurschel was one of two boys born to Frederick and Willie Pearl Glazner Sparkman. The other brother was named Carl, who was born in 1918. The family also had a sister, Theda. They made their home in Ryan, but moved to Waurika at some point before Theda was born in 1922.

All three siblings eventually ended up in Great Bend, Kansas, with the two boys heading there about the same time – probably in the early 1940’s.

The family was known for strict discipline and one summer evening Carl tested that discipline of his father and it resulted in Carl taking off that night and running eight miles in the dark to his grandparents that lived near Ryan.

Carl ended up graduating from Ryan High School. He followed his brother to Great Bend and became a businessman, insurance salesman and entrepreneur having founded Sparkman Aerial Photography.

In 2010, Carl passed away in Hutchinson, Kansas, which had been his home for a number of years. He was less than a month short of his 92nd birthday at the time of his death.

Carl had two sons, Dean and Gene, who is a well-known artist. Gene held art shows up and down the east coast and makes his home in Maryland.

Dean, who currently is a resident of Hudson, Wisconsin was a successful businessman as well, but also served as a lobbyist and worked for Elizabeth Dole lobbying for some of her causes at one time.

Carl, or Sparky as he was known in his younger days, also ran track at Ryan, but results from that time for the Cowboys are scarce.

Hurschel, who carried the nickname “Speedy”, was one of the stars of the Waurika track dynasty in the 1930’s and much of his success is well-documented.

The older Sparkman won both hurdles races at the OU Invitational in 1935 and that was considered the state championship at the time. His time in the 120 high hurdles at the OU meet set a meet record and was the fastest time in the United States that season among high school thinclads.

In 1936, Hurschel continued to dominate the hurdles’ events. He repeated as champion in the 200 low hurdles and 120 high hurdles at OU and helped Waurika earn the team title that season.

Hurschel went on to run track at Oklahoma A&M.

Hurschel was not the only Waurika native that made a mark on track success of Oklahoma A&M. R.V. Wright, also an accomplished hurdler at Waurika, was a star for the Aggies and eventually was named the Aggies’ freshman track coach in 1940 after completing his collegiate career.

One of Hurschel’s dreams was to compete in the Olympics. In 1936, he competed while still a high school student at Waurika in the regional Olympic tryouts and he finished second in the 120 high hurdles. The winner of the race advanced to a semifinal competition in Milwaukee, Wisconsin.

However, in that day, competitors trying to fulfill that dream had to pay their own way and Hurschel’s dreams were quickly dashed as he could not afford the expense it would take to earn a spot and then actually travel and compete in the Olympics.

When Hurschel made his way to Great Bend, he actually hopped on a freight train that was departing Waurika.

The area was good to Hurschel as he eventually married and had four children – Randy, Tommy, Mike and Carla. He retired as an engineer of the Missouri Pacific Railroad after 33 years of service.

Hurschel was a veteran who served in the U.S. army during World War II. He died in 1983 in Great Bend.

While the Sparkman family made more of a mark in central Kansas, it all started in Jefferson County.

NOTE: Thanks to Waurika News-Journal/The Ryan Leader reader Ramona Bryant who provided some of the information for this article. She is a cousin to the Sparkman boys and resided near Ryan for many years. She is currently a resident of Duncan.