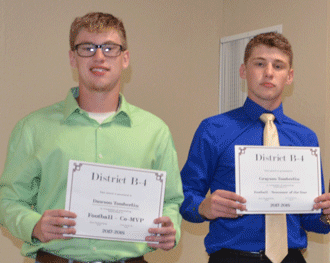 Sibling rivalry is a real thing

However, when siblings play on the same team, that rivalry tends to go out the window.

Dawson, who graduated from Ryan High School last weekend, and Grayson, who just completed his freshman year in high school were starters on all three athletic squads this past year at Ryan.

Both student-athletes, who are the sons of Tony and Mandy Tomberlin, competed in football, basketball and baseball. And, they did not just compete, but they excelled for most of the season in all three sports.

“It was pretty exciting to play together,” said Dawson in a recent phone interview. “It was really a pretty good feeling.”

Grayson echoed the sentiments of his older brother, “It was a pretty cool experience to be playing on the same team all season.”

And while the outstanding pair of athletes enjoyed the experience of playing together for the Cowboys during the past nine months, it has not always been that way.

Growing up in the Tomberlin home the two boys often engaged in backyard or driveway competition.

“It (competing against each other at home) was pretty intense,” said Grayson.

“A few times we ended up in a fight,” said Dawson, who admitted they spent a lot of time playing against each other growing up.

While Dawson was winding up his high school athletic career at Ryan and Grayson’s high school career was just getting started this past year, both played key roles for the Cowboys in each of the sports.

The most successful sport this past year for the Cowboys was on the gridiron. The Tomberlin brothers were a big part of leading the Cowboys to their first playoff berth since 2014.

Dawson, a running back and linebacker, was named the co-most valuable player in District B-4 and was selected along with Tate Kimbro, to represent Ryan at the upcoming Eight-Man All-Star game in June.

Dawson, who admits football is his favorite sport, was the third leading rusher for the Cowboys and caught five passes for 160 yards. He was also a defensive stalwart and was counted on to provide overall leadership to the team by veteran mentor Stan Mueggenborg.

As a freshman, Grayson started at the quarterback spot for the Cowboys and was the leading rusher with 638 yards and he passed for another 731 yards. He was also the fourth leading tackler from the defensive backfield.

Both brothers point to the football season for their most memorable moments of the 2017-2018 sports year.

“My favorite moment of the year was when I caught a pass over my shoulder against Waurika,” said Dawson.

It was the play that put the Cowboys in position for Skyler Parkhill to snag a 15-yard touchdown pass from Grayson with 14 seconds left in the game that sent the contest into overtime.

The Cowboys went on to defeat Waurika, 44-36, in a come-from-behind, double overtime thriller. Grayson points to the entire game as his highlight of his freshman athletic year.

On the hardwood, Grayson was counted on to direct the Cowboy offense from his point guard position and he led the team in scoring in seven contests during the season.

In the recently completed baseball season, which Grayson admitted was by far his favorite sport, the younger Tomberlin was the catalyst for the Cowboys’ run production. He set a school mark for most runs batted in during a single game with six against Grandfield.

The brothers would be quick to recognize the contributions of their teammates. Both were somewhat reluctant to talk about their achievements in the phone interview.

There was one incident during the football season that exemplifies what can happen when two brothers that spend years growing up together get to play on the same team in high school.

In a key district football contest with Central High that decided the district title, the two brothers took matters in their own hands on a fourth down during the game.

Coach Mueggenborg had directed the team to punt the football, but as the Cowboys approached the line of scrimmage, Grayson, who was slated to punt the ball, gave some hand signals to Dawson that he would look for him to complete a pass on a fake punt attempt.

The play did not end well as the pass fell incomplete and Central High took over on downs. Both coaches, including assistant coach and dad, Tony, reacted strongly to the antics by the brothers.

After a cool down period, the two brothers and dad were able to find some humor in what happened.

Some people would call it a foolish thing. Others might label it a freshman mistake. More than likely it was just two brothers who had spent lots of time together in the yard just trying to make a play to help their team rally in an important contest.

It has not been a unique experience for the Tomberlin boys to have their dad on the sideline or the dugout over the past football and baseball seasons. The elder Tomberlin serves as assistant coach for both sports and is also the principal at RHS.

“It has been an awesome experience having dad coach us,” said Grayson about his father who has been involved with both boys’ teams since T-ball days.

“It was great,” added Dawson, “it might have been a little tough at home after the game and it was harder, but it was cool to have him with us.”

Grayson looks forward to furthering his athletic career at Ryan. He is not only an outstanding athlete, but is also active in Future Farmers of America and Beta Club.

“At the first of the season it (playing with all upper classmen) was a bit intimidating, but after a while I was comfortable,” said Grayson of taking on the quarterback role as a freshman. “It was pretty much the same way with basketball.”

Grayson will spend the summer working on improving his skills particularly in football and baseball. He will participate in the team football camp at Shattuck in a few weeks and has a baseball opportunity for the summer. He also plans to work at the school for the summer.

Dawson plans to further his education at Southeastern Oklahoma State University in Durant and is set to major in Occupational Health and Safety. He was also active at Ryan in FFA and Beta Club.

Dawson’s summer plans include working around the school. He is also looking forward to the eight-man all-star game in Miami.

“Coach Mueggenborg told me it will be the most fun week of my life and I’m ready for it.”

While there have been many sibling combinations through the years compete for the Cowboys and Cowgirls through the decades, these two boys have represented their school and their family well in being teammates at RHS.