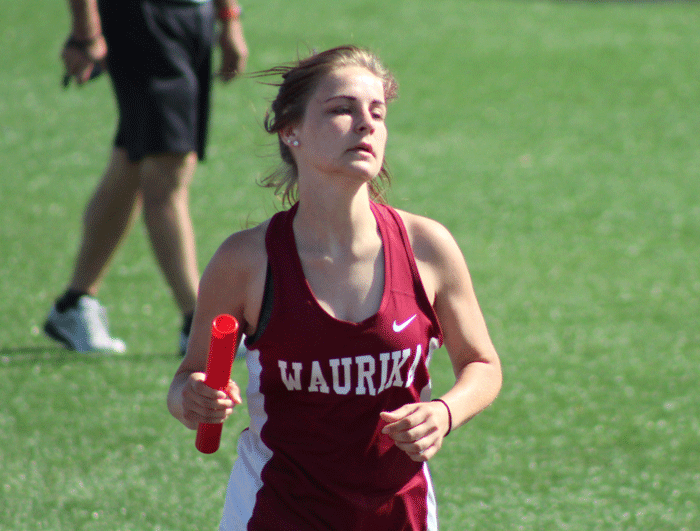 In the final regular season meet of the year for Waurika and Ryan track squads, the competition proved to be one of the tougher outings of the season.

The Waurika boys and girls and the Ryan girls competed a week ago Tuesday in the Velma-Alma Invitational that featured schools from Class 3A to Class A.

The Lady Eagles had the best team performance in the meet with a 10th place finish and a total of 21 points. Velma-Alma won the girls’ title with 84 points. Ryan finished tied for 34th as the Cowgirls could manage only one team point.

The Waurika boys only had one placer resulting in two team points which put the Eagles 26th among the 29 teams.

Turner Mora was fifth in the long jump with a leap of 19-2.5, which was his third best performance of the season.

The Lady Eagles’ best performance came from Madison Roberson who earned a silver medal in the shot put with a toss of 36-4.

Asia Smith and Lexie Streeter continued their season-long improvement in the 3,200 meters in the meet with season-best times recorded.

Streeter also placed in the high jump. Her leap of 4-4 was good enough for a tie for fifth place.

Sara Ballard rounded out the placers for the Lady Eagles with a fourth-place finish in the long jump. Her mark of 14-8.5 was her top performance in the event for the 2018 season.

The Cowgirl track squad continued its assault on the school records in the 1,600 and 3,200 meter relays.

While neither team placed in those two events, the squad still managed to set school records.

In the 3,200 meters, the Cowgirls set a new school mark for the fourth time this season. The team of Lilybet Harmon, Lily York, Holland Carter and Juliet Spangler recorded a time of 11:27.30.

Spangler was the only Cowgirl to place in the meet finishing sixth in the 3,200 meters with a time of 13:40.89, which is her third best career time and the second best mark this season.

The Cowgirl sophomore also ran well in the 1,600 meters, but did not place. Her time of 6:17.47 is the best mark of the season in that event and her second best time in the event for her two-year high school career at Ryan.