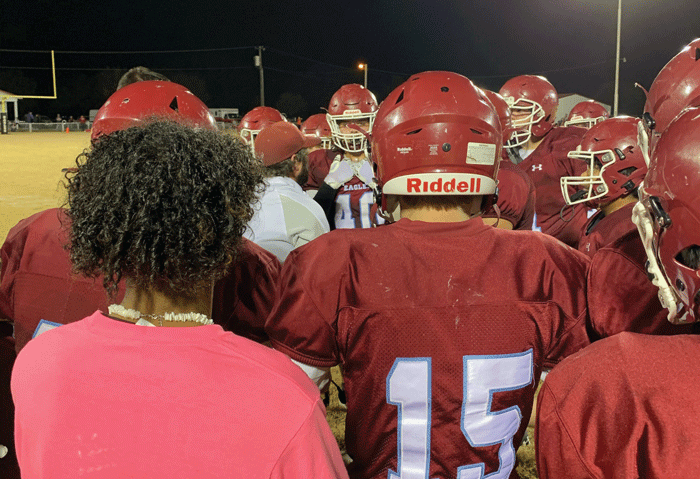 Waurika will continue its playoff march tomorrow night when they travel to Laverne for a third-round Class B post-season clash.

The Eagles advanced last week with a 58-36 victory over Southwest Covenant, while the Tigers had its game with Seiling canceled when Seiling could not field enough players for the game because of Covid-19.

The two teams met in the second game of the regular season at Waurika and the Tigers handed the Eagles a 42-18 defeat.

In that contest the Eagles scored first, but Laverne rattled off 42 straight points before Waurika got a couple of late scores to set the final margin.

The two teams have two common opponents. Both teams had big wins over Canton. Waurika dropped a 56-14 decision to Shattuck, but Laverne downed the Indians, 50-14, in the final game of the regular season.

Laverne has a host of talented juniors that make up the roster and they have turned in some impressive performances on the season with a powerful offensive and a stifling defense.

The Tigers have won seven straight games. Last week’s playoff game is considered a no contest and does not count in the win/loss records.

Waurika continues to experience an up-and-down season and last weekend’s big win over Southwest Covenant was an example of what the season has been like.

The Eagles got off to a 16-0 lead, but allowed the Patriots to cut it to 16-8. A big second quarter gave Waurika another big lead, but the Patriots scored 20 straight points to narrow the game to two scores early in the fourth quarter.

The 2020 season for the Eagles was disrupted twice with cancelations plus Waurika scheduled Laverne and Shattuck – both traditional eight-man powerhouses – for non-district games.

The Eagles struggled in one district game – the 28-22 overtime loss to district champion Empire.

Waurika came back with a big district win over Snyder and after a week off with a first-round bye picked up the playoff win over Southwest Covenant.

The winner of Friday’s contest with Laverne will advance to the Class B quarterfinals and face the winner of Summit Christian and Davenport.

Waurika and Tipton are the only remaining teams from District B-3 in the third round of the playoffs. Empire was eliminated by Alex and Snyder fell in an overtime thriller to Velma-Alma.

Laverne’s most famous alumni is not an outstanding athlete. Jane Jayroe was a Laverne graduate and was the 1967 Miss America. She worked in television news for two Oklahoma City stations and continues to be an ambassador for the state of Oklahoma.

Here’s a brief look at this week’s playoff game:

How to Get There: Take US 81 North to El Reno; Take I-40 West to the US 281 Spur toward Geary and Watonga; at Geary take US 270 to Watonga, Seiling and Woodward; Continue on 270 and turn north on US 283 to Laverne. Allow about four and half hours driving time.

Coaches: Tanner Woods is in his second season as the coach of the Tigers. He has compiled an 17-4 mark and has led the team to the playoffs in both seasons. Joe Allen is in his third season at the helm of the Eagles. Under Allen the Eagles have  a 27-6 mark.

Series History: Laverne won the only meeting between the two schools earlier this season.

Team Capsules: Laverne is putting together another impressive season. The Tigers lost the season opener to Cherokee but have reeled off seven straight victories including an impressive 50-12 victory over Shattuck that ended the Indians’ long winning streak. The Eagles will have to figure out a way to stop Houston Bockelman, who ran for 230 yards on just 13 carries against the Eagles in the regular season meeting. He had touchdown runs of 32, 55, 33 and 40 yards against Waurika in the earlier meeting. The Eagles will also try to figure out the Laverne defense which has given up no more than two touchdowns to an opponent since the early-season meeting with Waurika and the opener against Cherokee

The Eagles played admirably last week without Torrez, but went through stretches of the game against Southwest Covenant where the team seemed to be disengaged. Kevin Garcia responded to the challenge of filling in at quarterback for the Eagles and rushed for 178 yards and was effective through the air by completing five of eight passes for 99 yards. Waurika continues to rely on a strong running game that is helped along by a consistent offensive line of Angel Garcia, Bowden Forsyth and Bobby Aldape. Slade Cathey adds to the offensive line from the tight end position. The defense continues to improve, despite giving up 36 points to a talented Southwest Covenant team in the first round of the playoffs.

Outlook: The Eagles will have to play an error-free game and be able to corral the Tiger offense that is averaging over 47 points a game. If the Eagles can accomplish this against Laverne, they should have the opportunity to move into the quarterfinals. However, this will prove to be the toughest challenge of the season for the Eagles as they face an improved Laverne squad from the one they faced early in the regular season.