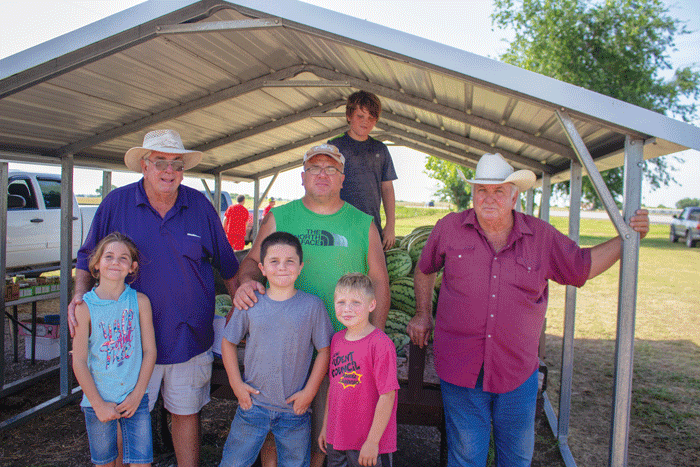 It’s hard to think about Terral, Oklahoma without thinking of mouth-watering watermelons.

People from all over love the watermelons grown in Jefferson County and every summer they will drive any distance to Terral just satisfy that craving.

The Blevins Brothers, Jerry and Charles, have been providing watermelon fans with what they crave for over 20 years.

Jerry and Charles grow the watermelon and canteloupe right in Terral.

However, they sell more than just watermelon and canteloupe.

Customers who stop by their shed just south of Terral on Highway 81 can find canteloupes, pickled okra, pickles, plum jelly, and salsa. Sometimes they even have tomatoes.

They sell around 1200 quarts of pickles a year. The pickles are the result of the labor of Charles and Loretta Blevins.

Some customers pick up 5 or 6 cases at a time.

A woman from Decatur picks up 10 cases per month to resell at her stand.

At one time there were watermelon patches all over southern Jefferson County.

Doug Gunter, who has been working with them since he was in high school, remembers he and his friends picking watermelons out in the heat all hours of the day and evening.

One time a crew from south Texas came up and while picking watermelons they engaged in a little contest with the south Texas boys.

The Texas crew had already been picking for a while during the season and it was still early for Doug and his friends.

The Terral boys outdid the Texas boys by loading their truck faster.

It shocked the Texas professionals that they had been outdone by some high school boys from Oklahoma.

Doug remembers the football team working during the summer and being ready for the season. Coaches would only have to practice once a day so the players could pick melons the rest of the day.

The cost of production has affected the growing of watermelons in Terral.

At one time about 75% of the people in Terral were involved in the watermelon venture.

Charles got into the business because of his father-in-law.

Jerry and Charles remembers the days of the Terral Watermelon Festival. It was a popular event for 50 years.

Besides watermelons, there was usually a parade, a classic car show, live music, mule jumping contests, and a dunk tank.

Doug Gunter remembers that most the trees down by the Baptist Church in Terral had trucks under them with farmers selling watermelons.

Years ago, Doug remembered supplying Rush Springs with watermelons for their festival.

Over the years they have got to know quite a few people, many of them have become loyal customers and friends.

During our interview, people were waiting in line to pick up their load of watermelon and canteloupes.

Tonya Wickware and her son Wrangler pull up with another load fresh from the field and everyone jumps into action.

Over the years there is no telling how many melons the Blevins have sold.

It’s nice to see them carrying on the Terral Tradition—supplying the country with the best watermelons money can buy.