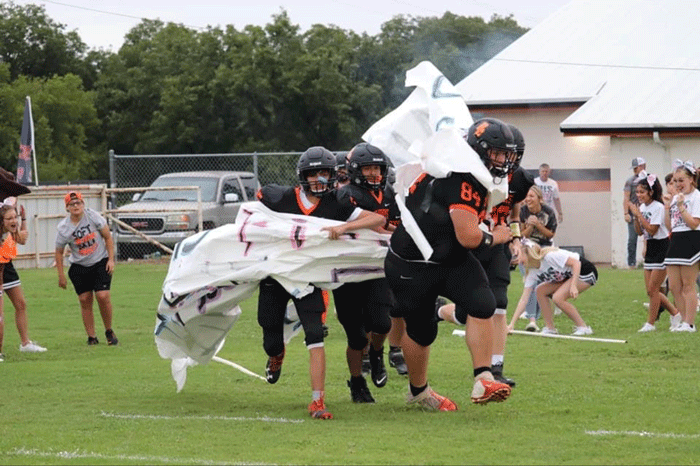 The Cowboys, 0-3 on the year, will return home tomorrow night (Friday) to host Thackerville in a homecoming contest.

Kickoff is set for 7 p.m. with homecoming festivities beginning around 6:30 p.m. at the Bob Givens Sports Complex.

Ryan suited out only 11 players last week, but the Cowboys opened the game with a long drive that ended when they came up one yard short of a first down at the Central five-yard line.

The Cowboys had moved from their own 28 to the Central 12, but on the 10th play of the drive, the Bronchos stopped the Cowboys on fourth down.

Ryan forced Central High to punt but after picking up a first down the drive stalled at the Cowboy 37 and the Cowboys punted the ball back to the Bronchos.

This time Central High drove from their own 13 in five plays for the score. Ryan Minden took the ball into the end zone from 14 yards out, but the two-point conversion pass was intercepted by the Cowboys’ Racen Williams and Central was in front, 6-0, with only 30 seconds showing on the clock.

The first drive came after another fourth down try by the Cowboys came up short. Central High took possession at the Ryan 32 and in only four plays went the distance. The scoring play came on a well-executed option play when Levin Young took the pitch from Minden and raced 27yards for the score. Jax Hansen ran for the two points giving the Bronchos a 14-0 lead with 11:06 left before the half.

A Ryan fumble that gave Central High the ball at their own 30 set up the next score. The Bronchos drove the 50 yards (Central High plays on an 80-yard field) in six plays and overcame two penalties to get the touchdown.

Hansen scored the touchdown from 15 yards out and Kolten Bethune caught a two-point conversion pass from Minden to increase the lead to 24-0 with 5:16 left in the second quarter.

On the ensuing drive the Cowboys could not pick up a first down and were forced to punt.

Central High took possession at its own 17 and six plays marched 63 yards for the score. Minden caught a 36-yard pass from Hansen and maneuvered through the Cowboy secondary for the score. Payton Spencer ran for the two points and Central High held a commanding 30-0 lead with just 1:30 left before halftime.

The Bronchos took the second half kickoff at the Ryan 38 after a failed onside kick attempt by the Cowboys. It took Central High only three plays to travel 38 yards. Young covered the final 15 paces for the score and Cooper Walters caught a two-point conversion pass from Minden to put Central High in front, 38-0.

The two teams exchanged possessions and after Ryan stopped Central High on a fourth down try, the Cowboys took over at their own 18.

Williams hit a wide open Caleb Perrin on first down and Perrin went the distance for a 62-yard touchdown pass. The try for two failed, but Ryan had trimmed the margin to 38-6.

Central High answered as they began a scoring drive at the Ryan 35. The Bronchos overcame two penalties in getting the touchdown. The final play of the drive came on Young’s 15-yard run for the score. The two-point pass was incomplete, but Central held a 44-6 lead with 7:06 to play in the third quarter.

The Cowboys did not quit, however, and they answered the score by Central High with a 61-yard drive in 13 plays.

Williams found Skyler Wickware in the back of the end zone and Wickware made the catch for the score from 11 yards out. The try for two failed leaving Ryan with a 44-14 deficit with just 29 seconds to play in the third quarter.

Central High scored for the final time as they took just 29 seconds to go 48 yards. Bethune caught a 38-yard touchdown pass from Minden and Aidan Randall ran for the two points with only seven seconds left to play in the third quarter.

The Cowboy offense was a bit more effective in the contest as they rushed for 149 yards and threw for 173 yards.

Williams led the Cowboys in rushing with 69 yards on 19 totes, while Perrin had 68 yards on 18 carries.

The favorite target for Williams in the game was Wickware who finished with seven catches for 77 yards. Perrin had four catches for 85 yards.

Trey Bryant turned in another good performance for the Cowboy defense with 15 tackles. Perrin added 11 stops.