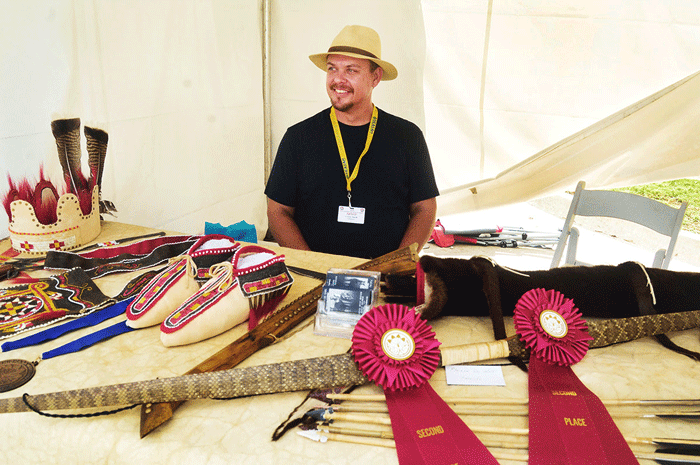 In December, he will add another accomplishment to his resumé – published author.

“The Warriors tools: Plains Indian bows, arrows and quivers” will hit bookstores and retail businesses Dec. 4. It is published by Roadrunner Press.

“I am very excited about it. Roadrunner Press is out of Oklahoma City and has published many Native American-themed books,” Smith said. “It is written from a Native American perspective. So many books concerning (Native American) history are written by Europeans and they had a completely different perspective from that of Native people,” he added.

He is still crafting weapons for movies but is unable to say much about his endeavors until studios and movie executives are ready to make announcements.

The book is written at a high school level and Smith’s greatest desire is to make it available to students. Children are the keys to preserving Native culture, in Smith’s opinion.

“The things that we do, our cultural ways, they must continue. The key to that is reaching children. We must inspire our youth or we are in trouble,” Smith intoned, adding “with everything I do, I try to inspire our younger generations to take up some of these techniques.”

“As a youth, when I was learning to make Native weapons, people were telling me ‘this is irrelevant’ and ‘there is no use for these things in the modern world.’ Well, I am a walking testament that isn’t true. Here are these ancient methods so needed and highly sought after today,” Smith said. “That just shows the relevance of our people and our culture.”

He has been crafting Native weapons since age nine. That is when he made his first bow. “No, it wasn’t a very good one,” Smith recalls with a sly grin, “but I was so proud because it actually worked.” By the time Smith entered his teens, his craft was honed to such a high degree he was asked to make bows for friends and for hunters.

Making weapons came naturally to Smith, but a curiosity nagged his soul. Not only did he wish to make quality weapons, but he also wanted them to be historically and culturally pure.

For guidance, he turned to Native elders and made frequent road trips to consult with them.

“Elders always have a story to tell. If you sit down with an elder, listen and let them talk to you, it is amazing the information they will share. Everywhere I went, whether it was Pine Ridge (South Dakota Oglala Lakota) or Tuba City in the Navajo Nation, I listened and learned.”

With the visits came an epiphany – all ancient cultures worldwide used archery.

No culture, however, excelled at it like Native Americans.

In the book, Smith devotes two chapters to weapons made from the horns/antlers and sinew of animals. “Native Americans made some of the most complex bows in the history of the world,” Native American “horn bows” are among them.

“Mountain sheep horns, elk antlers, caribou antlers, and sinew were all used. I’ve replicated many of those bows. For me, it was a lot of trial and error and a lot of mistakes. For our people to figure out this complicated technology, it is almost unbelievable,” Smith explained. “It shows great skill, great ingenuity, and dedication to work with material available to them in their natural environment. So, I share that knowledge in the book for people who want to try to do it.”

Smith is an expert in Native American weaponry. He has successfully replicated all kinds of weapons from many different tribes, including his own tribe. However, his specialty is weapons of Plains Indians at around the time they acquired horses. Most historians put the date at around 1680, following the Pueblo Revolt.

Sometime in the near future, he will move from his Lawton home to Pauls Valley. He has spent a year restoring a home once owned by a family member who is now deceased.

Sharing his knowledge, research, philosophy, and skills appeal to Smith because the book “will be around forever.”

“It took about four months to write the book,” he said. “I did some research to make sure all the facts were correct, but primarily I wrote about what I have learned from elders and by doing it. I had friends read the manuscript and they said ‘it makes me want to build a bow,’” he said. “And, I consider that a great compliment.”

“The Warriors tools: Plains Indian bows, arrows, and quivers” will be available on Amazon, Barnes and Noble and other major bookstores. Amazon will make the book available for Kindle download.