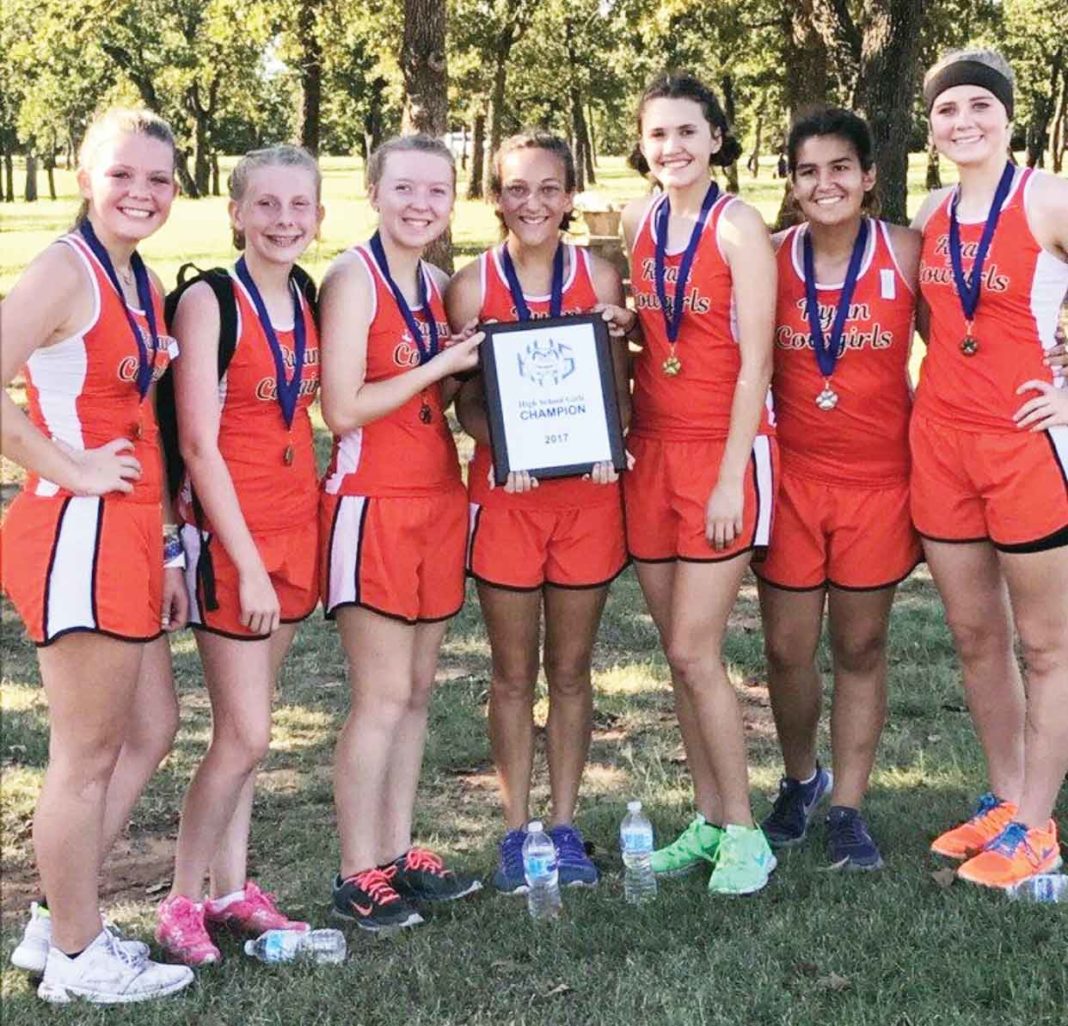 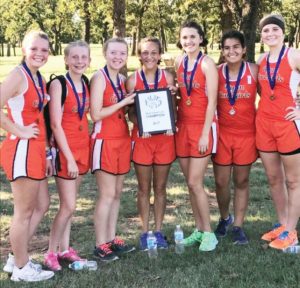 The Ryan Cowgirl cross country team came away with the team title of the Healdton Invitational last Saturday in a dominating performance – their second team title of the season.
Ryan also won the team title at the Waurika meet a few weeks ago.
The Cowgirls finished with 30 points at Healdton and the host school was a distance second at 43 and Davis was third with 52 points.
Next up for the Cowgirls will be the Class 2A Regional Cross Country meet at Velma-Alma on Saturday.
Every member of the Cowgirl squad medaled at the Healdton meet held at Healdton Lake in either the varsity or junior varsity division.
The Cowgirls snared the team title buoyed by a second, third and fourth place finish.
Holland Carter led the way for the Cowgirls by finishing the course in 12:50.
Juliet Spangler was right behind in third place with a time of 13:01 and Lilybet Harmon was fourth with a 13:40time.
Rounding out the team finishes for the Cowgirls were Lily York and Samantha Good. York was 11th with a time of 14:17 and Good nabbed 20th place with a 16:15 mark.
In the junior varsity division, Emily Lowry was fifth and Savannah Lashley was seventh. Both earned medals, also.
Ryan, which was ranked 13th in Class 2A heading into the Healdton meet, finished ahead of 35th-ranked Healdton and Class 3A’s 26th-ranked Davis.
A week ago Tuesday the Cowgirls turned in an impressive performance at the Velma-Alma Invitational at the Wildhorse Golf Course.
The Cowgirls finished sixth in the team race, but all the schools ahead of them were ranked in the top 20 in Class 4A or Class 3A.
Class 4A’s top-ranked squad, Ardmore Plainview, won the title with 19 points, while Class 4A’s fifth-ranked Pauls Valley squad was a distant second with 101 points. Ryan totaled 208 points in the crowded meet.
The Cowgirls had three runners earn medals.
Carter and Spangler finished 23rd and 24th, respectively, and ran less than a second of each other with a time of 14:23.
Harmon also earned a medal with a 25th-place finish in a time of 14:27 over the 3,200-meter course.
York finished 39th with a time of 15:22 and Good rounded out the team finishers by finishing 90th.
Also competing for the Cowgirls were Lashley who finished 127th and Lowry who was 130th.
The meet drew a crowded field because Velma-Alma will serve as the host of the regional for Class 2A, 3A and 4A on Saturday.
The Class 2A field which will feature Ryan and Waurika will be a tough one.
Cordell is the top-ranked Class 2A squad and will be competing at Velma-Alma.
Hobart and Velma-Alma will also send strong squads to the meet which will qualify runners for the state meet the next weekend.
The top seven teams in the meet will qualify for the state meet as well as the top seven individuals not on a qualifying team.