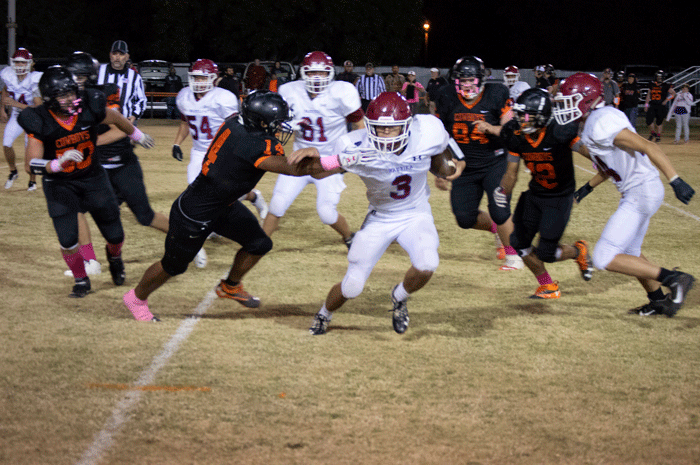 Waurika halted Ryan’s initial drive of the game near midfield and went on to crush the Cowboys, 52-0, at Bob Givens Sports Complex last Friday night.

Waurika moved to 6-1 and travels to Central High Friday with the kickoff set for 7:30 p.m.

Ryan, 3-4 for the season, will be back in action tonight trying to shake off two straight big losses as they travel to Bray-Doyle to battle the Donkeys. Kickoff is slated for 7:30.

The Cowboys simply had no answer for the powerful Waurika offense last Friday night.

The Eagles scored four times on one-play drives and only one score was from less than 15 yards out.

The big-play scores were simply too much for the grind-it-out Cowboy offense to keep up with. A pair of turnovers by Ryan and two onside kick recoveries by the Eagles also contributed to the rout.

The Cowboys punted on their first drive and Grayson Tomberlin launched a 41-yard punt which Waurika’s Kevin Garcia fielded and returned it to the Waurika 43.

In just four plays the Eagles moved 57 yards. Turner Mora found connected with Payton Fletcher for a 28-yard touchdown pass to put Waurika up, 6-0, with 8:18 to play in the first quarter.

On the ensuing drive, the Cowboys fumbled and Hunter Wesberry recovered for the Eagles to give Waurika the ball inside Ryan territory at the 46-yard line,

Mora again found Fletcher – this time wide open over the middle – and Fletcher did the rest to complete a 46-yard scoring play. Mora ran for the two points and with 7:15 left in the first quarter the Eagles had a 14-0 advantage.

The wheels began to fall off for the Cowboy as they could not field the kickoff and Octavio Gomez was there to cover the ball for the Eagles at the Ryan 43.

Garcia picked up 18 yards on first down and after a Waurika penalty, Mora broke into the Ryan secondary and scampered 24 yards for the score. Garcia added the run for the two points to increase the lead to 22-0.

In just a little more than 90 seconds the Eagles had scored 22 points and that wave of scoring was too much for the Cowboys to overcome.

The Cowboys put together their best offensive thrust of the night after Jonathan Clark fielded the short kickoff and returned it to the Waurika 48.

It took nine plays, but the Cowboys had moved the ball to the Waurika 30 after overcoming a holding penalty, but on a fourth down Tomberlin was sacked by Fletcher and Jordan Watkins to give the Eagles the ball at the Waurika 40.

On the first play Mora ran through the Cowboy defense for a 60-yard touchdown run. The Cowboys had stopped the two-point conversion, but Ryan was flagged for a penalty and on the second try Garcia converted to put Waurika in front, 30-0, with 1:40 still showing on the first quarter clock.

The second Ryan turnover of the night – an interception by Treyton Torrez – set the Eagles up deep in Ryan territory at the Cowboy 24. In five plays – the longest drive of the night for the Eagles – Waurika had another score.

Garcia took a direct snap and weaved his way through the Cowboy defense for a 14-yard scoring run. Mora ran for the two points and with 10:44 left in the second period the Eagle lead was now 38-0.

The Cowboys’ Andrew Villerreal returned the kickoff to the Ryan 46 and on first down Tomberlin found some gaps in the Waurika defense for a 23-yard run.

But two sacks, an incomplete pass and a failed fake punt gave Waurika the ball again at the Ryan 42.

A penalty set the Eagles back five yards, but it made little difference as Mora broke loose again for a 47-yard scoring run. The Cowboy stopped the two-point conversion, but now it was 44-0 with 8:17 still left in the half.

Gomez recovered the kickoff for the Eagles after the Cowboys could not field the ball and on first down Garcia crossed the goal line from 32 yards out. Torrez ran for the two-point conversion and that would wrap up the scoring in the game with 8:01 left in the half.

The Cowboys punted on the next drive and the Eagles cleared the bench, but moved from the Waurika 31 to the Ryan 25 in eight plays. The drive ended in a fumble that was recovered by Ryan’s Walter Snider, but only 1:55 remained in the half.

Ryan attempted to score to keep the game from ending at the half, but the Waurika defense held up and the game clock expired and the game ended on the mercy rule.

Mora once again dominated the offensive attack for the Eagles with 165 yards on just five carries and three touchdown runs and a pair of touchdown passes.

The Eagle defense was equally impressive holding the Cowboys to only 38 yards rushing and 52 total yards in the game.

Waurika faced a third down only twice in the game and converted on both of them. Ryan was only one of eight on third downs.

HIGHWAY 81 RIVALRY NOTES: Waurika now holds a 42-17-3 advantage in the series that began in 1919….This is the second straight year the Eagles have shutout the Cowboys…Waurika has recorded 20 shutouts in the 62-game series excluding ties and a forfeit….Three of those shutouts have come in the past four years….The Eagles have scored 50+ points against the Cowboys for two straight years and that has happened only one other time in the series – in 1971 and 1972…Waurika has won five of the last six meetings between the two rivals….The 52 points scored is the fifth most points scored by the Eagles in contests against the Cowboys….Waurika moves to 2-0 in district play, while the Cowboys are 0-2…The Eagles remained sixth in The Daily Oklahoman Class B poll for this week…The Eagles are ranked as high as fifth in Class B in one poll…The 52 total yards for the Cowboys is a season low.