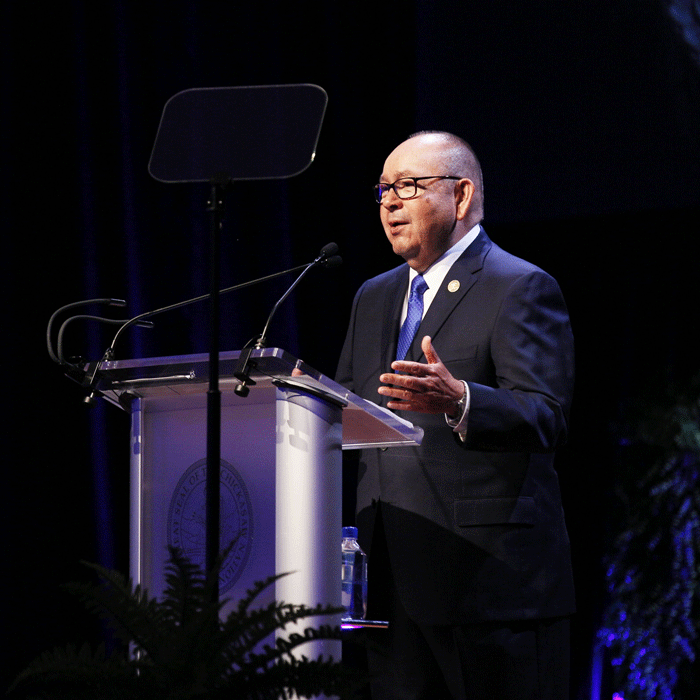 TISHOMINGO, Okla. – During his annual state of the Nation address Chickasaw Nation Governor Bill Anoatubby said that successful business diversification has led to significant advances in health care, housing, education and other services.

Gov. Anoatubby delivered the address Saturday, Oct. 6 to a crowd which filled Fletcher auditorium as well as an adjacent overflow tent on the Murray State College campus.

“Our business ventures grow each year, and through these economic development efforts we are able to generate the revenue needed to develop, expand and enhance programs and services,” said Gov. Anoatubby.

This year marks the 35th anniversary of the 1983 Chickasaw Nation Constitution.

“We have experienced remarkable growth under that Constitution,” said Gov. Anoatubby. “In the years following ratification, we turned our focus to economic development and business diversification, while maintaining education, health care, housing and other services as priorities.

“Today, the state of the Chickasaw Nation is strong. Through hard work and commitment to the Chickasaw people, we have more opportunities than ever before.”

“We have worked hard over the years to diversify our businesses to fund programs and services.”

“We have successful businesses in many different areas — gaming, hospitality, chocolate, tourism, banking, manufacturing and other industries.”

Bedré Fine Chocolate developed licensing partnerships with the University of Oklahoma and Oklahoma State University. Plans are also underway to make Bedré the official chocolate bar of the Dallas Cowboys.

Aligning the Bedré brand with such high-profile partners is one key to continued growth. As part of a similar strategy, the tribe recently developed a partnership which makes WinStar World Casino the official casino of the Dallas Cowboys.

Chickasaw Nation Industries, a federally chartered corporation established in 1996, continues to experience significant growth. Wholly owned by the Chickasaw Nation, CNI serves as a holding company with more than a dozen subsidiaries. Several CNI subsidiaries are leaders in their respective industries.

One CNI subsidiary, Filtra-Systems has developed a mobile filtration system designed for use in fracking operations. This mobile recycling system is capable of filtering up to 10,000 barrels of produced water per day, saving energy companies time and money, while also preserving water resources.

Corvid technologies, CNI’s engineering subsidiary, is working on a number of projects with large defense contractors. Corvid is currently expanding its headquarters and expects to add more than 350 new jobs in the coming years.

Growth in business revenues benefits education services in several areas, including increases in the amount of scholarships and text book grants.

“It is essential to offer the financial support that is often needed to earn a college degree or other types of higher education,” said Gov. Anoatubby. “This past year we provided close to $20 million in scholarships, grants and other forms of financial support to more than 5,200 students.”

“Early education is also vital to the success of children,” said Gov. Anoatubby. “We recently opened a new Head Start Center in Sulphur further investing in development opportunities for our youngest students. We expanded the number of classrooms and staff to serve more children in the area.”

In February of this year, the Chickasaw Nation broke ground on a 32,000-square-foot pharmacy in Ada, which will enable the tribe to expand pharmacy services to include hypertension, asthma and immunization clinics.

Construction also began in February on a new 25,000-square-foot wellness center in Ada, which will be almost twice the size of the current facility.

Virtual Visit is a new initiative designed to allow patients to “visit” a doctor without leaving home.

“For certain illnesses and injuries, patients can see a doctor, receive a diagnosis and even medication using a smart device,” said Gov. Anoatubby. “Our goal is to ensure that all Chickasaws have access to quality health care.”

Housing was one of the earliest services, beginning with the first Chickasaw Housing project in Fillmore, Oklahoma, 50 years ago. Since that time, the Chickasaw Nation has developed a wide range of housing programs.

Passage of the Native American Housing and Self-Determination Act in 1996 led to major improvements in housing programs.

“We immediately went to work conducting needs-assessment meetings to determine what building programs and services would most benefit Chickasaw families,” said Gov. Anoatubby. “From these meetings, among other things, we discovered that nearly 60 percent of the home loan applications being submitted by Chickasaws were being turned down by lenders.”

That led to development of the Chuka Chukmasi Home Loan Program. In the 20 years since the program was established, it has facilitated nearly $155 million in home loans to more than 1,400 families.

A variety of other services are also available.

“We have developed programs that assist with everything from home improvements, to down payment cost, and from counseling services, to installing storm shelters,” said Gov. Anoatubby.

Dozens of young Chickasaws are learning stomp dances through the Chickasaw Young Dancers program. This year, for the first time, the Chickasaw Nation sent its own team to the World Series of Stickball in Mississippi.

Aya, a walking and fitness app that integrates Chickasaw history, language and culture, was recently made available. An application featuring the songs found in the traditional Choctaw Hymnal was also released this year.

Level two of Rosetta Stone Chickasaw was released this year, bringing the total number of language lessons to 80. Forty more lessons are scheduled to be released this spring.

“Investing in our culture is a very high priority,” said Gov. Anoatubby. “The young dancers program, youth and adult stickball teams, language lessons, making traditional bows, flutes, beaded collars or corn husk dolls are important to who we are.

“We work to ensure that generations from now, Chickasaws will know who they are…that we are unconquered and unconquerable.”

Noting that the strength of the Chickasaw Nation is the result of a solid foundation and long-term strategic planning, Gov. Anoatubby said that the future is filled with the promise of even greater progress.

“Be certain, the Chickasaw Nation today is strong and getting stronger,” said Gov. Anoatubby. “With continued planning and a commitment to the Chickasaw people, we will prosper far into the future.”