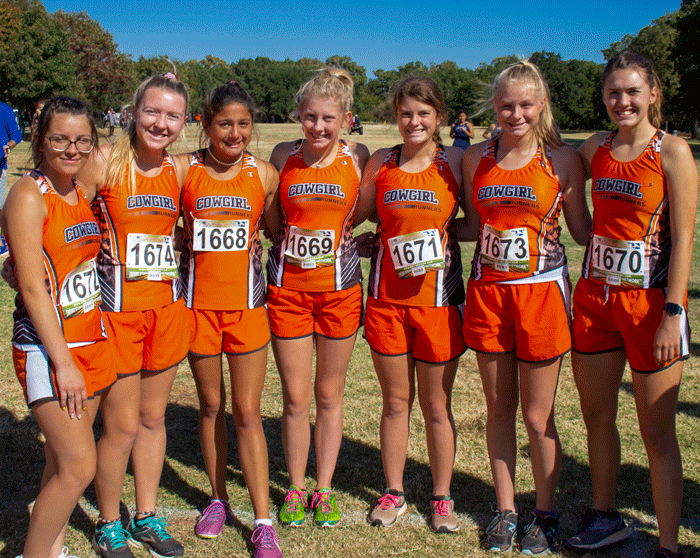 A record-setting season for the Ryan Cowgirl cross country squad ended in disappointing fashion, on a muddy and tough course at Shawnee last Saturday.

The Cowgirls were one of three regional team champions and came into the Class 2A state meet at the Gordon Cooper Technology Center ranked fourth in the state.

But with one runner battling a pulled muscle, another a hip flexor and still another a sprained ankle, the Cowgirls’ gutty performance was able to only net seventh place in the meet.

Watonga and Hooker battled for the team title with the Lady Eagles coming out on top with 52 points. Hooker finished with 53 points. The Cowgirls totaled 219 points.

The Cowgirls, winners of six meets during the season, had battled through the injuries in claiming the regional crown, but the injuries finally caught up with the squad at the state meet.

Even with the disappointing ending at the state meet, the Cowgirls had easily the most impressive season in the short school history of the sport.

In the regular season the Cowgirls never finished lower than fourth in any meet they entered and a couple of them were full of teams that were in higher classes and relatively talented.

The Cowgirls never backed down from a challenge all season and the state meet was no different when taking into consideration the injuries.

Ryan won team titles at Walters, North Rock Creek, Frederick, Sulphur and Healdton, plus the regional title. The Cowgirls were runner up at Prague.

Lilybet Harmon led the team performance at the state meet. The junior finished 20th in the field of 154 runners in Class 2A with a time of 13:42.50.

It was not Harmon’s best time of the season, but it did surpass her time and finish at the state meet a year ago.

Harmon has been the ringleader for the Cowgirls all season and she won three individual titles during the season – a first for a Cowgirl runner.

The next three finishers for the Cowgirls had to overcome injuries to finish the race at the state meet.

Whittany Spangler, a freshman for coach Steve Spangler’s harriers, was 119th with a time of 16:06.89.

Gracie Stamper, a senior running in her first state cross country meet, finished with a time of 17:39.76, which was good for 145th.

York and J. Spangler were running in their final races for the Cowgirls and the two Ryan seniors have been cornerstones in the building of the Ryan cross country program.

The 2019 Cowgirl cross country team accomplished much during the season and the performance at the state meet should in no way take away from a great season.