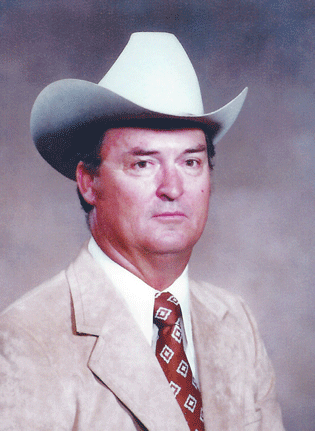 Early on May 20, 2018 at the age of 87, Lee Junior Robertson of Waurika, Oklahoma was welcomed into glory.  Lee Junior, known as “Junior” to all his friends and loved ones was born September 2, 1930 in Wirt, Oklahoma to Lee Morgan and Leola Sally Robertson.  Junior was the baby of his family with an older brother, MB, and a sister, Rosa Lee, both who have proceeded him in death.

As a young boy, Junior got the horse fever that became a systemic lifelong passion which left a legacy in the horse industry – especially the Paint Horse industry.  He was a true cowboy –a gold card carrier of the Pro Rodeo Cowboy association and one of the 1958 United States exhibition rodeo team members with Gene Autry in Havana Cuba just before the Bay of Pigs.  Junior roped with some of the best cowboys around and earned money to support a young family.

Once a cowboy friend at a roping seeing four sleeping kids in the backend of station wagon, commented to Junior “son – you do more rope”.   Junior married the love of his life, Bennie Ruth Bennett, on July 29, 1950 in Wirt, Oklahoma.  It wasn’t long after, when the offspring of Junior and Bennie Ruth began to enter the world:  Alan Wade in 1951, Loyce Lee and Joyce Dee in 1953, and Leola Sue and Lonnie Dru in 1954.  Joyce passed away at the age of 3 months old and Alan passed in 1999.  With a passel of kids and a horse addiction, Junior needed income. Taking stock of his opportunities Junior turned to food – opening Junior’s Truck Stop and Café in 1952 on Highway 81 in Waurika.  As the reputation for “good food for a good price” spread, the business outgrew its original location and in 1968 relocated to the west side of Hwy 81 and served the Waurika community and surrounding areas until 1983.  From 1983 to 1995 Junior operated the Robertson’s Enterprise until retirement in 1995.

Junior and Bennie Ruth made First Baptist Church of Waurika their home church.  They raised all four of their surviving children under the admonition of the Lord – giving them an eternal legacy of faith.  Today, that faith and support of their church family brings solace in this time of loss.  The legacy of Junior Robertson extends four generations.  He is survived by Bennie Ruth, his wife of 68 years and his three children – Loyce Lee Alligood, Sue Sarratt and Dru Robertson.  His grandchildren are Morgan Brett Gandy, Lee Sarratt, Courtney Pallfreeman, Brian Dru Robertson, Dana Ehtisham, Aaron Paul and Lisa Robertson and 25 beautiful great grandchildren.

Junior was not a perfect man – as none of us are – but he left a huge footprint in the lives of all who knew him.  He never said a bad word about another man, he lived life with passion and taught his children to love the Lord, to  live life without regret – letting go of the past, and to tell a good story because laughing is good for the soul.  Oh, and one other thing – always have a dog at your side.

Funeral service will be held at 10:30 AM, Wednesday, May 23, 2018, at the First Baptist Church in Waurika, OK, with Jeff McLemore and Bruce Humphries officiating. Visitation will be Tuesday from 2:00 PM to 8:00 PM at Dudley Funeral Home in Waurika with family receiving visitors from 5:00 to 7:00 PM. Memorials may be made to First Baptist Church in Waurika. Condolences may be sent to the family at www.dudleyfuneralhomes.com.