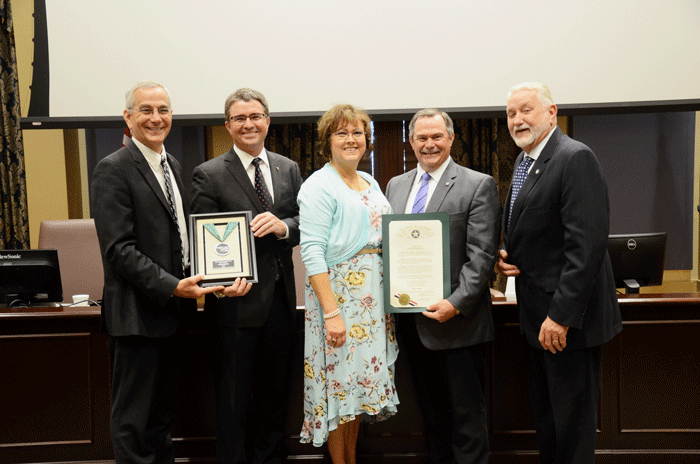 The award presented to Kinder recognizes Oklahoma agriculturalists who are leaders in developing and adopting outstanding environmentally innovative agricultural practices. This award highlights the efforts of an Oklahoma agriculture producer who is a steward of the environment and is dedicated to conserving the natural resources of Oklahoma while helping to ensure a continued supply of food and fiber.

Kinder is a fourth-generation farmer and rancher from Cotton County and an early innovator in Oklahoma agriculture. His family farms 5,500 acres of wheat, canola, sesame, and grain sorghum. They grow 2,500 acres of grass and run stocker cattle.

Some 20 years later, Kinder’s production system has become an inspiration to other farmers and ranchers.

“We live in exciting times,” Kinder said. “A conservation renaissance is happening on farms and ranches across Oklahoma. God willing, this generation has the capability to begin repairing soils, soils that were damaged almost 100 years ago during the dustbowl. Today, using novel sustainable practices that are economically viable and environmentally sustainable, the next generation will inherit better soils than we received. Never in history have we had this opportunity.”

Kinder’s production system uses less to get more, and the benefits go beyond production. Kinder says using no-till rather than conventional tillage reduces runoff and keeps the soil in place so the county doesn’t have to clean bar ditches. He also says the soil captures carbon dioxide and acts as a carbon sink, taking in more carbon than it emits, and he adds that no-till keeps nutrients in the soil.

Kinder has always had a presence in the agricultural community, but in recent years he has elevated his profile, maintaining a presence in the media to educate and promote environmental stewardship. Kinder has shared his production methods at national No-till on the Plains and No-till Oklahoma meetings. TheKinders farming operation was featured in a 2008 New York Times article, The Food Chain: Fields of Grain and Losses.

Kinder participated in the Farm Foundation Forum on Soil Renaissance at the National Press Club in Washington D.C. in 2014. Created in 1933, the Farm Foundation is an agricultural policy institute that connects leaders in farming, business, academia, organizations and government who collaborate on how to meet society’s needs for food, fiber, feed and energy. In 2016, the prestigious Foundation invited him to become a roundtable member.

Kinder recently returned from Washington, D.C. where he worked with the National Sustainable Agriculture Coalition to advocate for funding for soil conservation programs and research.

He is a member of the Soil Health Institute, created by the Noble Foundation and the Farm Foundation in 2013. He participated in the Institutes’ Soil Renaissance resulting in Enriching Soil, An Action Plan for Soil Health, unveiled in May 2017. The Institute’s mission is to safeguard and enhance the vitality and productivity of soil through scientific research and advancement.

Kinder and his wife Margaret Ann have been married for 38 years and have three children and three grandchildren. He said the rich soil he has created using emerging technology and his multi-faceted production system is the true inheritance he will leave to his children.

Kinder, a graduate of Cameron University, has served as the Cotton County Rural Water District secretary, the Cotton County Farm Services Agency chairman, and the Oklahoma Cattlemen’s Association board director. He participated in the Oklahoma Agricultural Leadership Program from 1984-1986 and received State Master Agronomist recognition from Oklahoma State University in 2009.

Kinder has served Oklahoma Farm Bureau at every level, serving as the Cotton County Farm Bureau president from 1990-2011, before becoming a state board member. He has served on the OKFB board of directors from 2011 to the present, with part of that time as vice president. Kinder also represents rural water interests on the Oklahoma Department of Environmental Quality board. As a board member, he has oversite over most of the state’s environmental policies and programs.  He served as a Nonresident Fellow at the Samuel Roberts Noble Foundation in Ardmore from 2009-2017. As a Fellow, Kinder performed independent critical reviews of programs, processes and procedures for the Foundation.

“I am overwhelmed to be the recipient of Governor Fallin’s Agriculture Environmental Stewardship Award,” Kinder said. “To me, this award recognizes a family tradition of over four generations to feed consumers from the land that God allows us to manage.”