Home News Pearl’s flying legacy lives on in her descendants 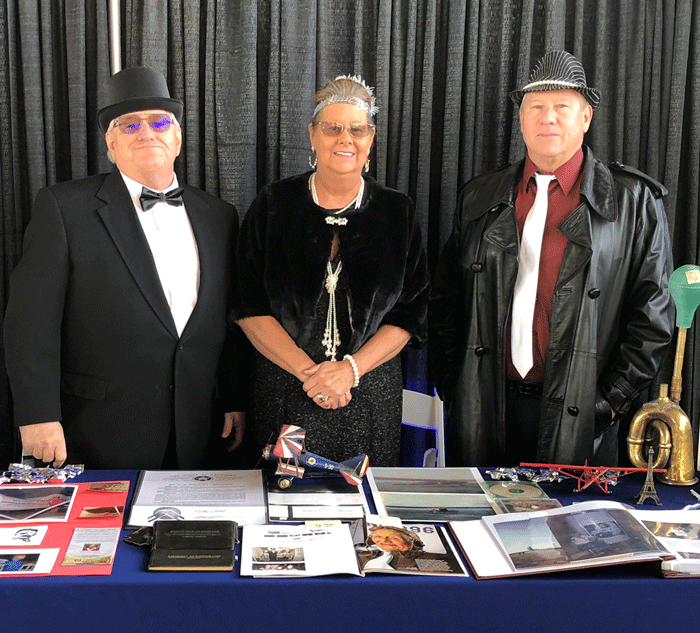 It might be said famous Chickasaw aviator Pearl Carter Scott was born to fly, so young was she upon making her solo flight in 1929 at the tender age of 13.

Ninety years later, Pearl’s airborne legacy has birthed a generation of descendants in whom flying has become an inescapable part of their DNA.

Bill, Scott and Craig Thompson, Pearl’s grandsons, are all licensed pilots. Their sister, Georgia Smith, never earned her pilot’s license but says she, too, can handle herself in a cockpit.

Their mother, Georgia Louise Scott Thompson, was Pearl’s daughter. She died in September.

“Flying has always been in our blood,” Ms. Smith said. “When mom, dad and grandma (Pearl) sat around the kitchen table they were all talking about flying. Bill actually got his pilot’s license before he got his driver’s license,” she said.

Though the Thompson children were born in Marlow, Oklahoma, their side of the family eventually moved to Muscle Shoals, Alabama, famous due to the musical talent of four local session musicians known as “The Swampers.”

Craig, 63, who has flown in over 100 countries as a commercial pilot, was recently hired by the city of Ada to manage its airport.

Bill, 67, is a professional financial planner who is moving his business to Ada from Birmingham, Alabama. “I do pre-and-post retirement planning,” he said. “I teach people about maxing out Social Security, how not to run out of money and how not to go broke in the nursing home.” He is also looking forward to getting back involved with flying, he said.

Georgia Smith expects to move to the area soon too from her home in Lexington, Alabama. While the brothers’ athletic prowess won them awards in high school, they credit Georgia with being the best athlete in the family due to being selected to play on state championship teams in volleyball, track and softball.

Craig said one reason he was interested in the Ada position is due to an airport manager in Gunnison, Colorado, who saved his life years ago. His original destination had been Aspen, Colorado, but his plane was diverted due to weather conditions.

Eventually landing in the pitch black night in Gunnison also proved dangerous because, at the time, it had no runway lights or rotating beacon. Craig said the airport manager, Terry Sargent, quickly came up with a solution. He called local police who parked on the runway with lights flashing.

“I landed over the cars and kissed the ground,” he said, laughing. “I took this job just wondering what was going through Terry Sargent’s mind that night in 1981.”

The jet he was piloting that morning was only 40 minutes ahead of the ill-fated Flight 93 out of Newark, New Jersey, with terrorists on board that later crashed in Pennsylvania. “That pilot pushed off the Newark gate behind me,” Craig said.

“It could have been him,” Ms. Smith said about her brother’s close brush with fate.

Before managing Ada’s airport, Craig flew for Thai Lion Air out of Bangkok, Thailand, just one of the 106 countries he has visited in his travels. He flew as a civilian pilot to Kuwait and Saudi Arabia 30 times transporting military equipment and soldiers, some of which were under-the-radar black ops missions. He has also transported Delta Force members and CIA personnel into world hot spots.

“I flew many refugee and relief aid flights. In1998 I flew relief aid to Honduras after Hurricane Mitch left 19,325 fatalities there.”

He also has flown cash between Federal Reserve Banks in America. “Did you know $38.6 million weighs 4,200 pounds? That’s something you need to know before you take off,” he said.

Craig said looking back on his youth, he now considers himself to have been something akin to “the little boy at the fence” while working at the Muscle Shoals airport. “It just gives you an opportunity to live at the airport from sunup to sundown and to learn and love every kind of aircraft,” he said.

All three brothers cut their aviation teeth sweeping out hangars, refueling aircraft and performing other chores before eventually becoming pilots.

One of the side benefits of airport work was seeing famous people who stopped to refuel. “We refueled President Jimmy Carter’s Air Force One aircraft there,” Craig said. “Muscle Shoals is the hometown of recording studios that were very big at that time. The Osmonds, James Brown, Tom Jones, Percy Sledge, the Rolling Stones, Bob Dylan and other singers would come in with their personal jets and we would see them and sometimes shake their hands.”

Pearl was a frequent visitor to the Thompson’s Muscle Shoals home. “Even though we lived 700 miles from our grandmother, she was there every time we turned around,” Ms. Smith said. “She was there visiting us and getting to know us.”

Ms. Smith said one of her memories is of Grandma Pearl saying, “One of these days someone’s going to walk on that moon up there, though probably not in my lifetime.”

Only the first half of Pearl’s foresight proved accurate. Man did walk on the moon, but Pearl lived to see it. Not only that, she also lived long enough to witness Chickasaw astronaut John Herrington blast off in the space shuttle.

Craig said he has distributed copies of “Pearl,” the Chickasaw Nation-produced movie about their famous grandmother, globally. “I bought a bunch of them. I just pass them out to my friends. Everybody wants a copy,” he said.

Pearl’s most recent honor was bestowed on her by “The Ninety-Nines” an international organization of women pilots based in Oklahoma City, Oklahoma. “They designated Dec. 9, Pearl’s birthday, Women’s Aviation Day in Oklahoma City,” Ms. Smith said.

The siblings donated Pearl’s original aviation log and engine books, as well as several photos, to “The Ninety-Nines Museum of Women Pilots.”

“We were moved to share her history with the world,” Bill said. “We want to encourage others to ‘Shoot for the moon, for even if you fail, you will still land in the stars,’ one of her favorite sayings,” he added.

“We lost our money because of the Depression,” Ms. Smith recalls their grandmother telling them. Grandma Pearl then added, “I can’t give you any money, but I’ll leave you a legacy to live on.”

Pearl died in 2005 at the age of 90 knowing her aviation legacy would, in fact, live on. It wouldn’t be a stretch to say it’s in her descendants’ DNA.