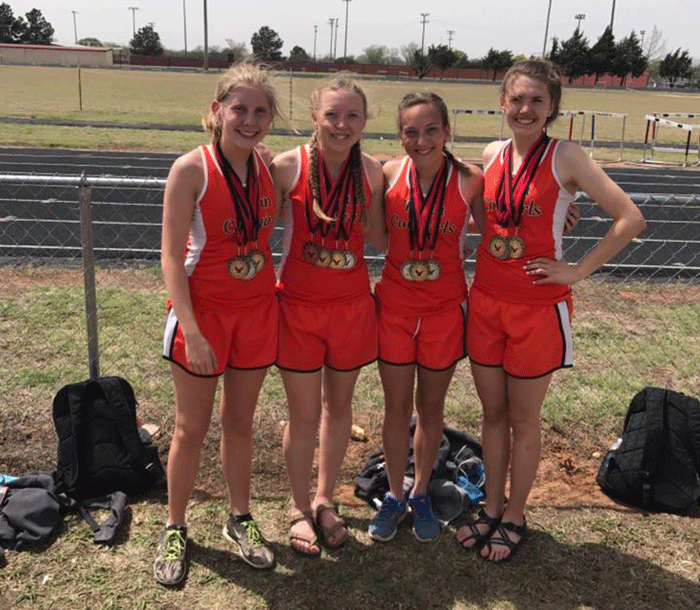 It was a disappointing end to what has been a notable track season for the Ryan Cowgirls.

While posting several school record times through the course of the season, the competition at the Class A State Track Meet at Western Heights last Friday and Saturday proved to be a bit overwhelming for the four-member Cowgirl track squad.

The Cowgirls failed to score in the meet which was won by Boise City with 72 points.

The best performance of the meet came by the 3,200-meter relay team of Lilybet Harmon, Lily York, Holland Carter and Juliet Spangler.

This team, which broke the school record four times during the season and owns the top six performances in school history, recorded a time of 11:17.26.

That mark is the second best recorded time in the event in school history – some 17 seconds behind last week’s regional meet mark that established the newest school record.

In the 800 meters, Carter ran into a talented field that included Ellie Gilbreath’s meet record performance. The Regent Prep student recorded a time of 2:16.4, which was a full second better than the previous state track meet mark.

Spangler competed in the 3,200 meters at the state meet and like Holland faced a very talented field for the event which featured another state meet record-breaking performance by Gilbreath.

Spangler’s time of 13:49.54 was only her fourth best performance of the season.

The talented Ryan sophomore, however owns the top eight times in this event in school history including a time of 13:37.56 – a school record set at Konawa earlier this season.

The lone representative at the state track meet for the Cowboys was Walker Rawlings.

Rawlings had a tough weekend against an experienced field. Only three of the 16 competitors in the event were freshmen or sophomores.

Rawlings’ mark of 34-2.5 was well short of his season-best throw in the regional meet a week prior.

In the discus, Rawlings fell short of placing in the event with a throw of 114-07.

OVAL OBSERVATIONS: A big apology to Rawlings is due as last week’s edition of the Waurika News-Journal tabbed him as a freshman, but he is a sophomore at Ryan High School….However, Rawlings’ older brother, McCain, is the last state champion in track for the Cowboys as he won the shot put in 2015….Prior to that, the last gold medal performance by a Cowboy thinclad was in 1988 when Gary Waitman won the discus event….The Cowgirls have never had a state champion in any event in track and field….It was the third straight year the Cowboys failed to score at the state meet…The Cowboys have only recorded points at the state meet in six seasons since 2000….The highest finish ever for the Cowboys at the state track meet was fourth in 1973 when the mile relay team claimed the gold medal….The Cowgirls have not fared any better in state competition having only scored on four occasions since the 2000 season….The Cowgirls have had only one top ten finish in the state meet and that came in 1990 when the Cowgirls scored 14 points and tied for ninth place….The Cowgirls’ 1,600-meter relay squad did not qualify for the state meet, but turned in an outstanding 2018 season setting the school record in the event five times…..The best time prior to this season in the event was posted in 1990.