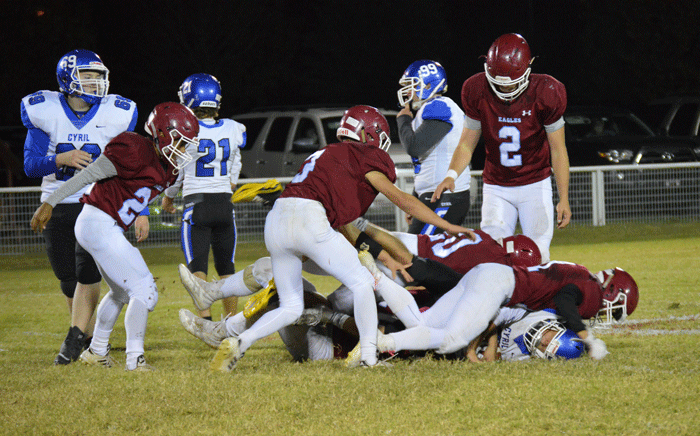 It took a little longer than most of Waurika’s victories in the 2018 season, but the Eagles eventually came away with another 48-0 mercy-rule victory over Cyril last Friday night in the first round of the Class B playoffs.

The Eagles will host a second-round playoff game and will face Cherokee tomorrow night (Friday). Kickoff is slated for 7:30 p.m. at the newly-named Norman West Field at Cy Sloan Stadium.

The Eagles totally dominated the game especially on defense giving up only 40 total yards through just over three and half quarters of play before Waurika ended the game by the 45-point rule.

Waurika got the first break of the game when a fourth-down punt attempt went awry when the ball was snapped over the punter’s head.

The Eagles took possession at the Cyril 23 and in just two plays scored the first touchdown. Turner Mora covered the final 21 yards. Zac Brown ran for the two points give Waurika an 8-0 advantage with 9:51 left in the first quarter.

The Pirates had snap issues on the next possession and Cyril was forced to punt after two bad snaps and a quarterback sack by Aaron Nitka.

The Eagles set up at their own 42 and marched the 58 yards in just three plays Waurika had its second score of the night.

Mora scooted down the left sideline and was tackled just inside the Cyril one for a 41-yard gain. Colton Bryant took the ball over the goal line on the next play to give Waurika a 14-0 lead with 7:17 showing on the first quarter clock.

After holding Cyril to another three-and-out, the Eagles started another drive at the Waurika 26. In just three plays the Eagles covered the 74 yards for another score. The big play of the drive was a 54-yard pass to Edwin Garcia that put the Eagles deep in Pirate territory.

Two plays later, Mora picked up a bad snap and walked into the end zone from seven yards out. The two-point conversion failed, but Waurika held a 20-0 lead with 4:09 still to play in the first quarter.

After a series of exchanges in possessions, Cyril finally got something going as the Pirates moved from their own 48 to the Waurika one, but on a fourth down play, Gatlin Black crashed through to drop the Cyril quarterback for a five-yard loss.

On Cyril’s next possession, Hunter Wesberry picked off a Pirate pass, but the Eagles were stymied after being stopped short on a fourth down play.

The Pirates took over on downs but on first down, Black pounced on a Cyril fumble giving the ball back to the Eagles.

This time the Eagles took advantage of the turnover and in just two plays moved the 33 yards for the score. Kevin Garcia scored from 17 yards out and after the two-point conversion failed, the Eagles held a 26-0 lead with just 11 seconds left in the half.

The second half opened with a failed Cyril onside kick that Austin Dyer recovered at midfield.

On first down, K. Garcia went the distance for the score. The two-point conversion failed, but Waurika was in front, 32-0, with 11:48 left in the third quarter.

Cyril could not move on its next drive and after Waurika took possession, Cyril’s Jose Rivera intercepted a Mora pass giving the Pirates possession at Cyril seven-yard line.

On first down, the Cyril quarterback scrambled back into the end zone and was met by Mora and Jordan Watkins for a safety that increased the Waurika lead to 34-0 with 7:50 left in the third quarter.

The free kick was returned to the Cyril four and Bryant scored on a four-yard run on first down. Brown got the two-point conversion and Waurika held a commanding 42-0 advantage with 7:40 left in the third quarter.

With the mercy-rule victory now in sight, the Eagles attempted an onside kick which Waurika’s Dyer was able to retrieve giving the Eagles the ball. In six plays the Eagles were able to get the game-ending score as Mora scored from one yard away with 5:45 left in the third quarter.

EAGLE FLIGHTS: The 48-point margin of victory is the third best in school history behind the 55-point margin against Haileyville in 1988 and the 51-point win over Okemah in the 1951 state finals….The 48 points scored by the Eagles is the sixth most in school history during post-season play…The Eagles are 2-3 in the playoffs since moving to eight-man play and both wins have come over Cyril….This was the third time the Eagles have held an opponent to less than 40 yards of total offense during the 2018 season….Cyril still leads the series with the Eagles with four wins in the seven meetings….Waurika is 10-0 for only the second time in school history….This is the second time since beginning eight-man play the Eagles have advanced to the second round and only the third time since the 1996 season.