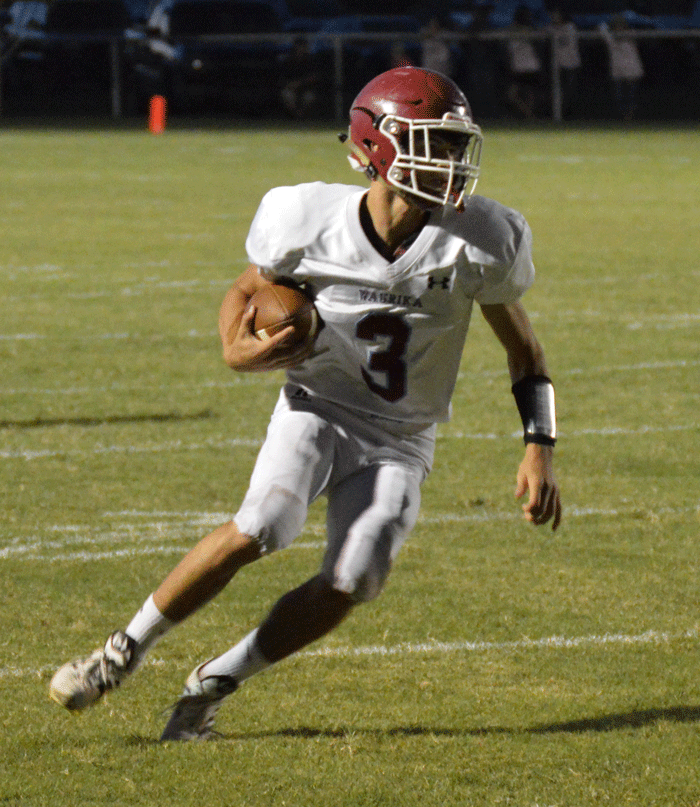 The Waurika Eagles took a big step toward a district title last Friday (October 5th) night as they handed Wilson a 38-6 defeat at Skinny Stewart Stadium in Wilson.

Waurika is now 5-0 on the year and faces a match up with rival Ryan Friday night at Cy Sloan Stadium. Kickoff is set for 7:30 p.m.

The Eagles do have four more district games remaining and anything can happen, but Wilson came into the game 5-0 and it was widely thought Waurika and Wilson would be the two teams to beat in the district.

Using a consistent rushing game Waurika took the opening kickoff and moved 54 yards on just seven plays for the first score of the night. Zachary Brown scored from five yards out and Turner Mora ran for the two-point conversion to give Waurika an 8-0 lead with 9:26 to play in the first quarter.

After the two teams exchanged punts, Wilson started a series at their own 45 with just 42 seconds left in the quarter. Trevor Schaff, the Wilson all-purpose senior athlete, rushed for three yards on the first play, but then went 52 yards for a score with just 26 seconds left to play.

The quarter ended with Waurika clinging to an 8-6 lead.

Waurika answered the Wilson threat with a 51-yard drive for a score. Waurika covered the distance in only four plays. Helped along by a Wilson personal foul penalty Mora capped the drive by covering the final nine yards. Mora ran for the two points and Waurika was in front, 16-6, with 11:40 to go before intermission.

Again the two teams exchanged punts, Wilson took possession at their own 20 after Mora’s punt went into the end zone.

Wilson’s offense sputtered and was hampered by two holding penalties and eventually Waurika forced a punt.

But, Waurika turned the ball back over to the home team on their own turnover of the night giving Wilson the ball at the Waurika 40.

The Eagles drove to the Waurika 17 but a penalty and a tackle for loss set up fourth down and Wilson could not convert.

Waurika took over on its own 20 and on the first play from scrimmage Brown swept right and then cut back against the grain into the open field and outran the defenders for an 80-yard touchdown. The run for two points failed, but Waurika was now in front, 22-6, with 2:37 left before intermission.

After a Wilson punt, Waurika took over at its own 38-yard line with just over one minute to play. A penalty set the ball back to the 49 and an incomplete pass left Waurika with a second and long.

Colton Bryant ran for the first down setting up a last minute score for Waurika.

Waurika lined up with everyone to the left and Mora took the snap in an empty backfield and went right and ran 33 yards untouched for the score. Bryant ran for the two-point conversion putting Waurika in front, 30-6, with only 34 seconds left in the half.

The second half became a defensive standoff with stagnant offense and penalties.

Late in the third quarter Waurika took possession at the Wilson 40-yard line. Overcoming one penalty Waurika moved down the field, but it took 12 plays to get the final score of the night.

With 11:52 left in the game, Mora capped the drive with a two-yard run for the score. Mora added the two-point conversion leaving Waurika comfortably in front, 38-6.

Neither team could mount a serious threat for the rest of the game.

Brown led the Waurika offense with 107 yards on just six carries. Bryant was just behind with 98 yards on 13 carries.

Waurika rolled up 295 yards on the ground and that was the entire offensive output on the night for Waurika. Wilson had 317 total yards on the night, but three turnovers and a number of penalties kept Wilson off the scoreboard most of the night.

EAGLE FLIGHTS: Waurika now holds a 51-20-3 series edge with Wilson and is 3-0 in meetings since both schools began eight-man play….Waurika has won six of the last seven meetings between the two schools….Waurika holds a 9-6 advantage in the series since the 2000 season….Waurika gained the large advantage in the series with a 13-game winning streak from 1979 to 1991 – the longest of this season…Wilson and Waurika have met a total of 74 times since the first meeting in 1921, which is the second most games against a single opponent in school history….Waurika and Ringling have met 88 times on the gridiron….The 32-point win for Waurika is the largest margin of victory since a 46-7 win in 2010.