Home News Carrie Underwood and Pioneer Woman among those added to OK Hall of... 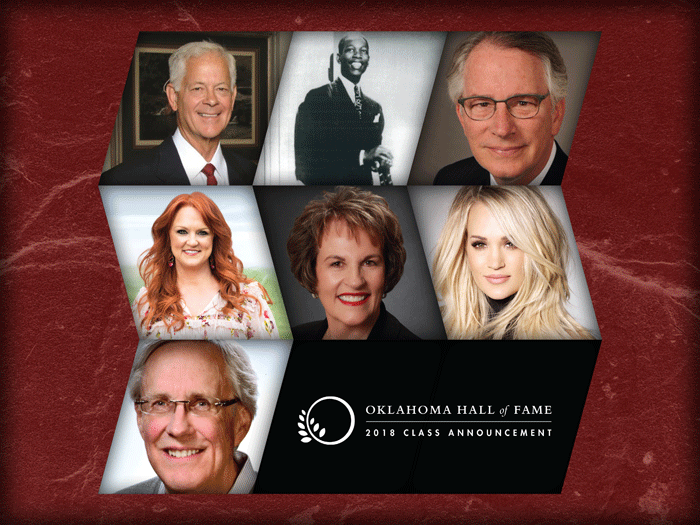 “It’s incredibly inspirational to be surrounded by such an accomplished group of people who have literally created our history,” said Shannon L. Rich, president and CEO of the Oklahoma Hall of Fame and Gaylord-Pickens Museum.  “The Oklahoma Hall of Fame announcement luncheon gives past inductees the first opportunity to congratulate the new class.”

“Being inducted into the Oklahoma Hall of Fame is Oklahoma’s Highest Honor” Rich said.  “The recognition of our state’s greatest asset – our people – is the foundation upon which our organization was created.”

Along with being honored at the formal induction ceremony, the 2018 Honorees will be recognized in November with the unveiling of their portraits at the Gaylord-Pickens Museum, home of the Oklahoma Hall of Fame.  In addition, their biographies, photos and videos will be accessible through interactive exhibits in the Museum.

The 91st Oklahoma Hall of Fame Banquet & Induction Ceremony will be held on Thursday, November 15, at the Renaissance Tulsa Hotel & Convention Center. In celebration of the Oklahoma Hall of Fame’s 91stinduction ceremony, past inductees Becky Dixon and Jane Jayroe Gamble will serve as emcees.

Biographical information on the 2018 Oklahoma Hall of Fame inductees:

Born and raised on the family farm in northeast Nebraska, Paul Allen worked on the farm until leaving for the University of Nebraska. After earning his business degree he was hired by the George A. Hormel Company, working in Fremont, Nebraska and Austin, Minnesota, before relocating to Oklahoma City in 1967 to manage the Hormel production plant.

Seven years later he and Dave McLauglin co-founded Advance Food Company in Enid, quickly making the community home.  The company was sold in 2010 with approximately $800 million in sales and 2400 employees.  Today the business is owned by Tyson Foods.

Allen has been inducted to the Enid Hall of Fame and received the Pillar of the Plains Award. He remains in Enid with his wife Joan and has two sons, seven grandchildren, and one great grandchild.

The youngest of five born to tenant farmers in rural Oklahoma, Mo Anderson was the first in her family to earn a college degree.  She taught elementary school before entering the world of real estate.  Her first Century 21 franchise quickly rose to the third-highest producing of the company’s 7,500 locations in North America. She served on the Oklahoma Real Estate Commission, including two terms as chairman, and convinced Keller Williams Realty Co-founder Gary Keller to expand outside of Texas.  Anderson became the regional director for Oklahoma and the co-owner of two local market centers.  In 1995, she became president, CEO, and partner of Keller Williams Realty and in 2005 was named vice chairman of the board where she continues to focus on nurturing and growing the company’s culture.

As author of A Joy-filled Life: Lessons of a Tenant Farmer’s Daughter who became a CEO, Anderson currently is touring North America speaking about her book in a presentation called 7 Pillars of a Joy-filled Life, encapsulating the lessons she has learned over her lifetime.  She also has launched MoAnderson.com, an on-line community allowing her to fulfill her dream of mentoring others.  Splitting her time between homes in Edmond and Austin, Texas, Anderson is actively involved in both communities.

An award-winning blogger, photographer, and celebrity chef from Bartlesville who first grew a fan base around her award-winning blog, “The Pioneer Woman,” Ree Drummond launched her career when she began writing about life as a cattle rancher’s wife on their Osage County cattle ranch. As her content grew, including a food section filled with recipes, so did her fan base—eventually attracting over 20 million page views per month. This led to cookbook deals and her first televised appearance on the Food Network’s Throwdown! With Bobby Flay in 2010, where she beat the celebrity chef in a Thanksgiving-themed cooking contest.  The following year, her successful television series, The Pioneer Woman was launched.

In 2016, Ree opened the The Pioneer Woman Mercantile in Pawhuska, Oklahoma, home of the Tallgrass Prairie Preserve. Known as “The Merc,” the 25,000-square-foot historical building, purchased and renovated by the Drummonds, includes a two-level restaurant, retail store, and bakery.  The Merc attracts visitors from all fifty states, and many countries, to Pawhuska and the surrounding area.  Earlier this year, she opened The Boarding House—a three-story, eight-room hotel right down the street from the Mercantile, and will open a pizza restaurant, event space, and steakhouse in Pawhuska later this year. Ree lives on the family ranch with her husband Ladd and their four children.

Oklahoma City’s David Rainbolt graduated from the University of Oklahoma and the Tulane University Graduate School of Business.  After starting his banking career in Texas, he moved back home to Oklahoma in 1982 and began working to modernize the state’s banking laws.  He was CFO of the founding management team of United Community Corporation and, in 1992, became chief executive officer of BancFirst, its successor company.  During his 25 years as CEO, the company went public, expanded into metropolitan areas, and closed 34 acquisitions, growing from less than $700 million to over $7 billion at the time he became executive chairman in 2017.

With his wife Kim, Rainbolt has three sons, making him a little league baseball coach for 24 years, and two grandsons.

Adopted as an infant in Norway and brought home to Tulsa, Stuart was educated in Tulsa, and at the Culver Military Academy, the University of Oklahoma, and The University of Tulsa.  As chairman of the board and chief executive officer of First Stuart Corporation, Stuart is continuing in the family business.  He also is the managing partner of Jon R. Stuart Interests, L.L.C., its primary focus on energy, and is a trustee for the Stuart Family Foundation.

Appointed by His Royal Highness King Harald VI of Norway, Stuart serves as the Royal Norwegian Consul for Oklahoma, Kansas, Missouri and Arkansas.  He served on the City of Tulsa-Rogers County Port Authority Board for more than 25 years, including five years as chairman.  The Port of Catoosa’s Maritime Park is named for him.  He has served on the Gilcrease Museum National Advisory Board and the Committee of 100—Tulsa, as a trustee for Boston Avenue United Methodist Church and Philbrook Museum of Art, as well as the Falcon Foundation in Colorado Springs, and served two terms on the University of Oklahoma’s Board of Regents.

He and his wife, DeeDee, continue to make their home in Tulsa.  Stuart is a third-generation inductee, following his grandfather W. G. Skelly, inducted in 1939, and his father, Harold C. Stuart, in 1983.

Carrie Underwood emerged from the promise of her 2005 American Idol win to become a true multi-format, multi-media superstar, spanning achievements in music, television, and film. A seven-time GRAMMY® Award winner, she has sold 64 million records worldwide and recorded 26 #1 singles, 13 of which she co-wrote. In 2013, the Grand Ole Opry member starred as Maria von Trapp in NBC’s three-hour holiday blockbuster, the Emmy®-winning The Sound of Music Live!, whose airings attracted 44 million viewers.

Her latest platinum studio album, Storyteller, produced four #1 hits. 2017 marked her fifth season as the voice of primetime television’s #1 program, Sunday Night Football, and last November, she co-hosted the CMA Awards for the tenth consecutive year. Earlier this year, she released the hit event anthem “The Champion” featuring Ludacris, which she co-wrote to open Super Bowl LII and was incorporated into NBC’s coverage of the 2018 Olympic Winter Games. Her sixth studio album, “Cry Pretty,” will be released on September 14, 2018, on Capitol Records Nashville. She recently premiered the powerful title track and first single from the album, which she co-wrote and co-produced.

Born in Bonham, Texas, Oklahoma City became Charlie Christian’s home at the age of two. From a musical family, Christian first began playing the trumpet and at age 12 was playing a cigar box guitar he made himself.  When his father and brothers formed a quartet, Christian received his first real guitar as a member of the group. They played Oklahoma City clubs, including those in historic Deep Deuce, before Christian’s reputation spread and he began touring across the United States before moving to California at the age of 23.

Christian had changed the way the guitar was played, he brought it to the forefront as a solo instrument, amplified its sound, and changed what it could do with his single-string solo technique.  Christian played with the greats—including Jimmy Rushing, Count Basie, and Benny Goodman.  Even today, courses on and the techniques of Christian are taught in universities and studios worldwide.

Carlos Santana has talked about the influence Christian had on him; B. B. King said he just wanted to be able to play like him, but never could; and the Jazz at Lincoln Center curator said he changed the sound of music forever.  Who would have ever imagined that at the time of his death, at only 25, young Charlie Christian would be respected worldwide as the “Father of Bebop” and an inspiration to the greats that followed?