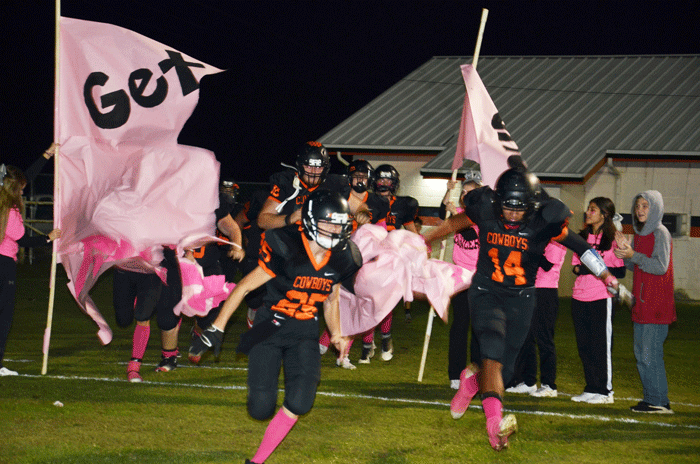 It was another amazing contest at Bob Givens Sports Complex last Thursday night as Ryan scored a come-from-behind 78-74 victory over Bray-Doyle.

The Cowboys have a huge district contest tomorrow night (Friday) as they travel to Skinny Stewart Field in Wilson to battle the Eagles. Ryan, Wilson and Central High are in a battle for the runner-up spot in District B-4.

The fans who stuck around for the end of last Thursday’s battle with the Donkeys will be talking about this one for a long time. A number of fans departed after Ryan established an 18-point advantage with 7:33 left in the game.

To Bray-Doyle’s credit, the Donkeys battled back to take the lead with 43 seconds to go before Ryan got the winning score with just four seconds left in the game.

The game had a number of momentum shifts and featured an offensive show by both teams. A number of school records were established during the game.

The Cowboys’ performance on offense was even more impressive considering they had to overcome 218 yards in penalties – many of which were against the offense.

Ryan scored first on Grayson Tomberlin’s 12-yard run that capped a 61-yard drive in six plays. The try for two failed, but Ryan led 6-0 with 8:44 to play in the first quarter.

Bray-Doyle came back to snag the lead with two touchdown catches by Curtis Cox – the first one for 14 yards and the second for 22 yards from quarterback Justin Miller. Both were outstanding catches. Mark Kilbourne ran for the two-point conversions and Bray held a 16-6 lead after the first quarter.

The Cowboys put together a 10-play, 54-yard drive with Tomberlin finding Skylar Parkhill on a 16-yard touchdown pass to narrow the score to 16-12 with 11:53 left in the second quarter.

Bray-Doyle answered with a 59-yard drive in just four plays. Dalton Whitehead got the final six yards on the ground and with 10:44 to play before intermission the Donkeys led, 22-12.

The Cowboys answered with a five-play, 58-yard drive. Parkhill got the rushing touchdown from 18 yards out. Kalen Weldon caught the two-point conversion pass from Tomberlin and Ryan had trimmed the lead to, 22-20, with 9:12 left in the half.

This gave Ryan excellent field position at the Donkey 40 and Travis Fristoe finished the short drive with a 25-yard rushing burst for the score with 7:01 still to play in the second quarter. The Cowboys were back on top, 26-22.

The Donkeys looked poised to score again moving to the Ryan 22, but Tomberlin intercepted a pass in the end zone and after a Ryan penalty on the return, the Cowboys found themselves at their own two.

The Cowboys narrowly escaped disaster as a handoff was fumbled in the end zone, but Tomberlin alertly picked it up and made it out to the Cowboy 3.

After a critical third-down conversion, Tomberlin executed perfectly a screen pass to Parkhill and the Cowboy senior took it 70 yards for the score. Tomberlin found Andrew Villerreal for the two-point conversion pass and Ryan extended the lead to 34-22 with 1:49 left to play in the half.

Another penalty on the Cowboys on the kickoff return gave the Donkeys the ball at the Cowboy 39. It took six plays, but Kilbourne found Tully Booth on the halfback pass for a 17-yard score. Whitehead ran for the two points and the Cowboy lead was narrowed to 34-30 with just 20 seconds left to play in the half.

After Gunner Phillips returned the kickoff 14 yards to the Ryan 35, Tomberlin and Parkhill connected on another screen pass and Parkhill raced 65 yards and crossed the goal line as the halftime buzzer sounded. Tomberlin ran for the two points and the Ryan lead was stretched to 42-30 at the half.

The Donkeys took the second-half kickoff and marched 54 yards on seven plays with Whitehead getting the score from one yard out. Kilbourne ran for the two points and the Cowboy margin was cut to 42-38.

Ryan answered with a 68-yard drive on only four plays. Tomberlin again found Parkhill loose and Parkhill took the pass and covered the final 50 yards for the score. Tomberlin ran for the two points and Ryan was in front, 50-38, with 7:24 left in the third quarter.

Another Donkey drive was thwarted by a Tomberlin interception at the Ryan five and after yet another Ryan penalty the Cowboys set up on offense at the Ryan 13.

It took Ryan only three plays to travel 87 yards. Fristoe scampered for 36 yards on first down, Parkhill got seven on the next play and then Tomberlin bolted 43 yards for a touchdown. The run failed, but with 4:45 left in the third quarter Ryan was now in front, 56-38.

The Donkeys answered, however, with Whitehead getting a four-yard rushing touchdown and Miller adding the extra point to trim the lead back to 56-44 with 2:28 left in the third frame.

Phillips had another outstanding return on the ensuing kickoff as he fielded the ball at the Cowboy 17 and took it 44 yards to the Bray-Doyle 34. It took Ryan six plays, but Fristoe ended the drive with a four-yard rushing score putting Ryan back in front, 62-46, with 11:23 to play in the game.

The next Donkey drive was aided by 31 yards in Ryan penalties and covered 62 yards in only six plays. Miller got the score on a quarterback sneak from one yard out and the Ryan lead was cut to 62-52 with 9:43 still left in the game.

The Cowboys answered the threat with a four-play, 81-yard drive for a score. Parkhill carried the ball the final 29 yards for the score and after Tomberlin added with two-point conversion the Cowboys seemed comfortably in front, 70-52.

The Donkeys had no quit in them. They took the kickoff and marched 56 yards in six plays helped along by a targeting penalty. Miller ran for the score from eight yards out and Kilbourne ran for the two points and with 4:43 left in the game Ryan held a 70-60 advantage.

What the Cowboys could not afford happened on the next drive as on the first play the Cowboys fumbled and the Donkeys recovered giving Bray-Doyle possession at the Ryan 39.

A highly-questionable pass interference call aided the Donkey cause and a key pass play that bounced off Weldon’s hands into the hands of the Donkey receiver helped Bray put together the scoring drive. Whitehead finished the effort with a five-yard run and after Kilbourne ran for the two points, Ryan clung to a 70-68 lead with 3:12 left to play.

The Cowboys proceeded to try to run out the clock and moved the ball from the Ryan 26 to the Donkey 38 when another borderline call went in favor of the Donkeys as Bray recovered a fumble that appeared to happen after Tomberlin was on the ground.

This put Bray with possession at the 1:37 mark and 72 yards away from the go-ahead score. Two 15-yard penalties on the Cowboys and two big plays moved the ball to the Ryan 18 with one minute left. Two plays later Miller found the end zone from six yards out to give Bray-Doyle the lead.

The Cowboys, however, did not give up. The Cowboys took possession at their own 33 after a 14-yard return by Phillips on the kickoff.

After a first-down incompletion, Tomberlin found Fristoe across the middle for a 48-yard gain putting the ball at the Donkey 19 with 22 seconds left.

An 18-yard scamper by Tomberlin put the ball near the goal line. Tomberlin finished off the drive with a one-yard score and also ran for the two points giving Ryan the lead again.

Bray-Doyle had one final play but the halfback pass fell incomplete and Ryan had sealed the win.

Parkhill and Tomberlin were again outstanding for the Cowboys on offense. Parkhill rushed for 117 yards on 14 carries and had 215 yards receiving on five catches.

Tomberlin combined for 549 yards of offense with 273 yards rushing on 25 carries and 276 yards passing on just seven completions. Add 13 yards of interception returns and he had a total of 562 all-purpose yards.

Four school records were broken in the contest.