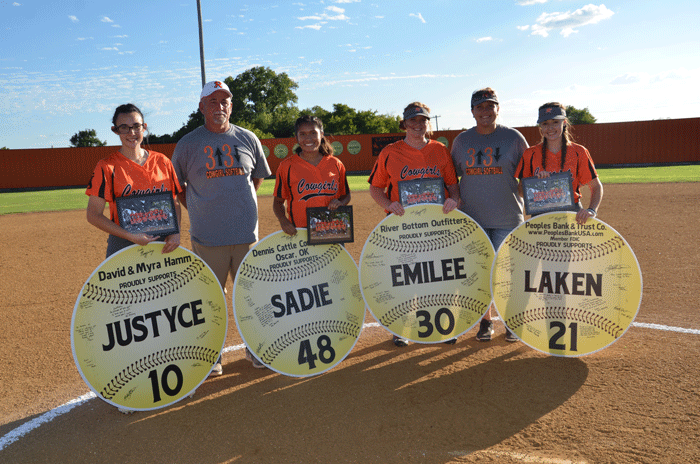 One of the most disappointing things in sports is losing a game at the very end.

That is exactly what happened in the district tourney elimination game with Turner last Thursday at Thackerville.

The Cowgirls led throughout the contest before allowing Turner to score four runs in the seventh and final inning to drop a 6-4 encounter with the Lady Falcons.

In the first district tournament game the Cowgirls fell to Thackerville, 10-6.

Thackerville went on to claim the district title with two victories over Turner.

In the opening game of the tournament the Lady Wildcats got off to a 6-0 lead before the Cowgirls could find the scoring column.

In the bottom of the fourth, Sadie Guzman led off with a single and Emilee Martin followed with another base hit. Carter Combs came on to run and her and Guzman both scored to cut the Thackerville lead to 6-2.

Neither team scored in the fifth, but Thackerville padded its lead in the top of the sixth with four runs to take a commanding 10-2 advantage.

The Cowgirls got one run back in the bottom of the sixth as Brooklyn Charmasson reached on an infield single and scored on Lindsey Reak’s RBI-single to make it 10-3.

So the Cowgirls faced a seven-run deficit in the bottom of the seventh and it looked like Ryan had a chance to extend the game.

Samantha Good, Kodi Duke and Guzman – the first three batters in the inning – all reached base and came around to score. Duke and Martin both had runs batted in during the uprising.

However, the final three hitters for Ryan were retired ending the contest.

This sent Ryan into a must-win situation with Turner.

The Cowgirls took command of the second game with a four-run first inning.

Good and Duke walked to start the inning and then Guzman, Martin and Charmasson each got an RBI-single. Combs, who ran for Martin eventually scored and the Cowgirls held a 4-0 lead after one inning.

In the top of the sixth inning, Turner added another run but Ryan clung to a 4-3 lead after six innings.

In the top of the seventh the Lady Falcons put together a three-run rally to take a 6-4 lead.

The Cowgirls went down in order in the bottom of the inning to end the game and the season for Ryan.

A week ago Tuesday the Cowgirls rolled to a 15-1 victory over Springer at the Lady Cardinals’ home field.

It was a slow start for the Cowgirls as they led 1-0 after two full innings when Charmasson walked and eventually scored to get Ryan on the scoreboard.

In top of the third inning the Cowgirls sent 16 batters to the plate and scored nine runs.

The Cowgirls were credited with six runs batted in and had seven hits in the inning to take a 10-0 lead.

Ryan added five more runs in the top of the fourth inning. This time the Cowgirls were helped along by four walks and a hit batsman.

The Lady Cardinals struck for one run in the bottom of the fourth inning, but it was not enough to keep the game from ending by the run rule.

Guzman led the Cowgirls at the plate by going 3-for-4 in the game with three runs batted in. Good was 2-for-3 with a run batted in and she scored three times.

Martin picked up the win in the circle for the Cowgirls allowing only two hits and striking out eight Springer batters.

Ryan finished with a 7-16 record in Stan Mueggenborg’s first season as head coach.