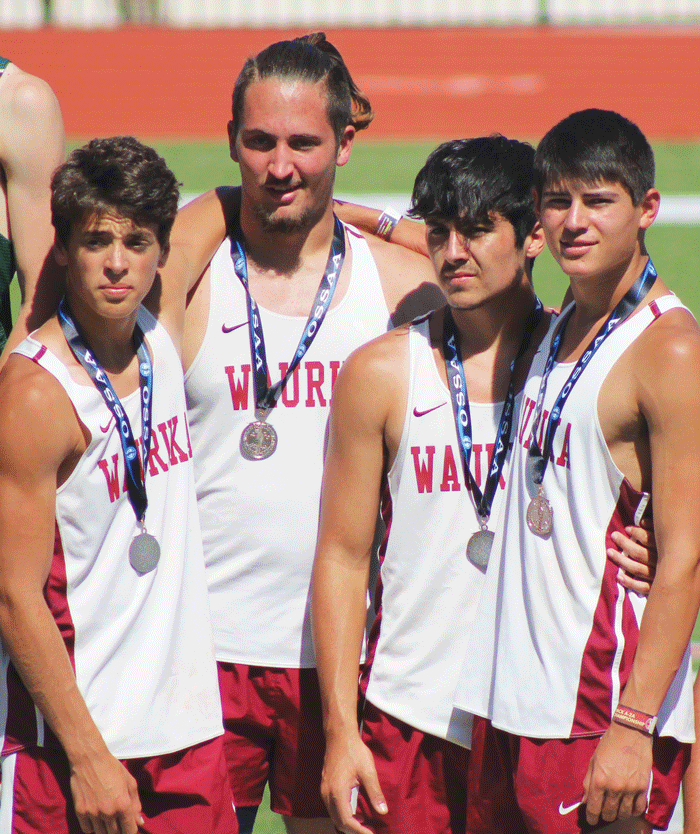 Spurred on by the 1,600-meter relay squad, the Waurika boys track squad finished in a tied for tenth place in the Class A State Track Meet last weekend at Western Heights High School.

It was an exciting finish to the 1,600-meter relay as Waurika was the runner up to Thomas in the event and they were separated by less than one second.

This earned the Eagles 16 points and put them in a tie with Lomega and Woodland in the Class A team standings. Thomas won the state title with 77 points.

Waurika was the defending champion in this event having won the 1,600-meter relay in 2017.

For the rest of the Eagle participants at the state meet, the competition was fierce.

The 3,200-meter relay team of Arellano, Octavio Gomez, Bryson Hernandez and Bryant competed last Friday and turned in a time of 9:22.06, which was the third best time posted this season in the event by the Eagles.

The 800-meter relay team competed in the preliminaries on Friday, but failed to qualify turning in the 10th best time. Turner Mora, Bryant, Nick Alvarado and Garcia posted a time of 1:36.71. The time was just three-tenths of a second away from placing sixth in the event.

Mora also competed in the 400 meters and the long jump. Mora’s performance on Friday in the preliminaries of the 400 meters was short of qualifying for the finals.

Teammate Seth Cathey posted the ninth best time in the 400 meters – just missing the mark needed for qualify for the finals.

Mora also competed in the long jump, but his mark of 18-0.25 was well behind the rest of the 16-member field.

Madison Roberson and Asia Smith led the way for the Lady Eagles at the state meet.

Waurika finished with 10 points in the state meet and tied with Central High for 18th place. Boise City won the state title with 72 points.

Roberson capped an outstanding junior year with a third place finish in the shot put. Her throw of 35-1 was just five inches short of second place.

In the discus, Roberson failed to place for the Lady Eagles. Her best toss on the day was 83-10.

Smith managed to place in both the events in which she competed.

In the 1,600 meters, Smith posted a time of 5:39.98, which was significantly below her previous best for 2018. The Waurika freshman was fifth in the event.

Smith also finished fifth in the 3,200 meters. Her time of 12:37.07 was also a big improvement over the season’s best time for her.

Lexie Streeter also competed for the Lady Eagles in the 3,200 meters, but her time of 13:32.33 was well behind the time needed to place in the event.

Sara Ballard also competed for the Lady Eagles at the state meet in the long jump. Her best leap of 14-10.5 was the 11th best among the 16 competitors in the field.

The 3,200-meter relay team of Smith, Streeter, Dallas Fristoe and Kaci Reynolds posted a time of 11:30.28 but finished with the 12th best time and did not place. All four members of this team are freshmen.

All the competitors for the Lady Eagles at the state meet should return for the 2019 season.