Home News Diet vs. Exercise: Which is Better for Weight Loss? 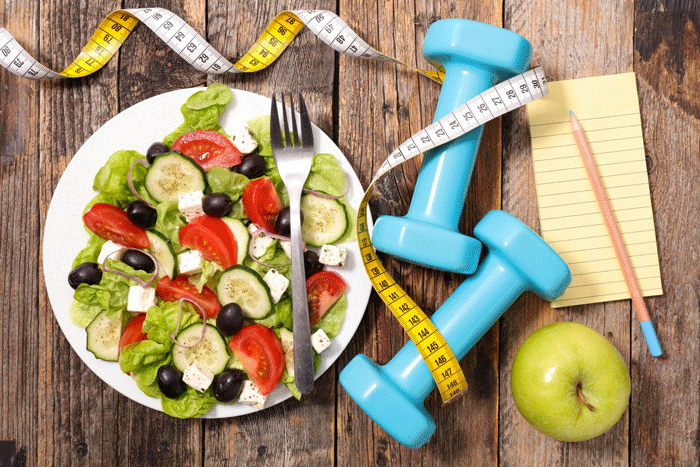 (StatePoint) What’s more important: diet or exercise? Anyone who’s tried to lose weight and maintain a healthy lifestyle has likely asked this question.

Sixty-eight percent of people want to lose 10 pounds or more, according to a recent Harris Poll on behalf of Nutrisystem. It’s always a good time to get started on your goals. So, should you focus on diet, exercise or both?

When it comes to weight loss, the split should be roughly 80 percent focus on what you eat and 20 percent on exercise. The logic is simple, say experts.

“It’s all about calories in and calories out. If you’re eating less and exercising, you’re going to burn more calories,” says Courtney McCormick, corporate dietitian at Nutrisystem. “However, exercise often makes us hungrier, which is why many people who only change their exercise habits don’t see the scale move.”

To achieve a healthier lifestyle and shed weight, consider these quick tips that combine both diet and exercise.

• Eat more often: A 2015 study from the Journal of the Academy of Nutrition and Dietetics found that on average, people who ate six times or more daily consumed fewer calories, had a lower body mass index, and ate more nutrient-rich foods than those who didn’t eat at least six times a day. Eating smaller meals every three hours keeps you feeling full, controls blood sugar and helps boost metabolism.

• Watch portions: American portions have become too big; and those used to dining out may consider restaurant portions to be correct, when they’re often four times as large as what’s recommended. Learning portion control is key to losing weight. When eating out, ask for a to-go box and save half for later. You can also turn to plans, like Nutrisystem, which deliver portion-controlled meals to your home.

• Veg out: Vegetables are low in calories, high in filling fiber and loaded with nutrients. For breakfast, add spinach to an omelet; at lunch, pile your sandwich high with fixings like tomatoes, cucumbers and peppers, or use lettuce as a wrap instead of bread. During snack time, munch on carrots dipped in hummus or blend kale into a fruit smoothie.

• Drink more water: A study found that when people drank six cups (48 ounces) of cold water, they increased their resting calorie burn by up to 50 calories each day. Another study found that dieters who drank two eight-ounce glasses of water before meals lost 36 percent more weight over three months than those who didn’t sip before sitting down to eat. So, fill up that water bottle!

• Get moving: The Centers for Disease Control and Prevention recommend 150 minutes of aerobic activity weekly, but research suggests that it doesn’t matter if you exercise for two-and-a-half hours straight or break it up into 10-minute chunks. Aim for 30 minutes of exercise per day then build up to 60 minutes when you’re ready.

More diet and exercise tips can be found at leaf.nutrisystem.com.

Remember the key to meeting your weight loss and health goals is to make sustainable lifestyle changes. Focus on eating better and moving more and you’ll be on the right track.