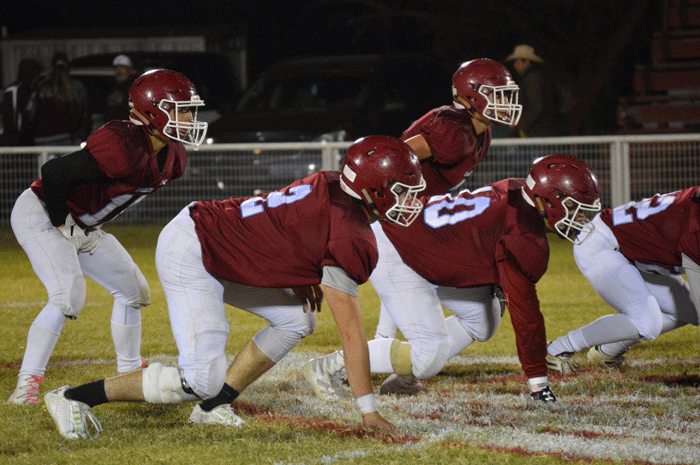 Cy Sloan Stadium will continue to be the place to be in Waurika on Friday night as the Eagles take on Cherokee in the second round of the Class B playoffs.

Waurika will be looking to advance to the state quarterfinals for the first time since 1996 when they play host to the Chiefs.

Waurika advanced with a 48-0 victory over Cyril in the first round, while Cherokee earned a second-round playoff berth with a 36-16 victory over Turpin.

Much like the Eagles, the Chiefs have exceeded expectations during the 2018 season.

Cherokee was tabbed to finish third in District B-2, but earned the runner-up spot in the district after falling to Pioneer-Pleasant Vale, 58-40, in the final regular season game.

The Eagles were picked to finish third in District B-4, but rolled through the district competition to claim their first district title since 1988. Waurika scored mercy-rule victories over every district opponent except for Wilson.

The third round will be tougher for the team that advances from this encounter.

The winner will take on the winner of Davenport and Weleetka. Davenport, 11-0 on the year, is ranked second in Class B, while Weleetka, with an 8-3 mark, is ranked eighth.

State Rankings: Waurika is ranked ninth in the Daily Oklahoman’s Class B poll, while the Chiefs are unranked.

Coaches: Bryce Schanbacher is in his 11th season at the helm of the Chiefs and has a 96-52 mark with eight playoff appearances. Joe Allen is the first-year mentor for Waurika and has not lost in 10 games in 2018.

Playoff History: Cherokee is in its 20th appearance in the playoffs with 12 of those coming in eight-man competition. The Chiefs have compiled a 19-17 mark in the playoffs and have won state titles in 2013 and 2010 when the Chiefs competed in Class C. The Chiefs also were state runner-up in 2014. The Chiefs missed the playoffs in 2017 ending a seven-year streak of qualifying for post-season play.

Waurika is in its 28th appearance in post-season play and the fourth time in eight-man play. Waurika has a 27-25-2 playoff record and one state championship in 1951. The Eagles earned their first district title in eight-man competition this season. Waurika will be looking for its 10th quarterfinal appearance in the playoffs win a win against Cherokee.

Team Capsules: Cherokee features a one-two punch on offense led by quarterback Cade Chace and running back Payton Ream. In the team’s win over Turpin, both players rushed for over 100 yards with Ream getting 112 yards and Chace finishing with 146 yards. Both scored two touchdowns in the game. Chace has been splitting time with Rustin James after the starting quarterback suffered a season-ending injury midway through the season. Ream had 124 yards in a loss to Pioneer-Pleasant Vale on the final night of the regular season in a game that settled the District B-2 race. Ream had five touchdowns, rushed for 262 yards and had 131 yards receiving in a wild 82-48 win over Kremlin-Hillsdale. Chace had all three scores in a tense 18-12 overtime win over Ringwood in week nine. The Chiefs are averaging 34.9 points per game on offense, but are surrendering 32 points a game. Cherokee racked up a season-high 678 total yards in the win over Kremlin-Hillsdale. The Chiefs have won five of their last six games.

The Eagles continued what will no doubt be one of the greatest seasons in school history with the first-round playoff win over Cyril. Waurika has the advantage as the district champion of hosting for the second round of the playoffs. If you are looking for impressive numbers by the Eagles, they are scarce because Waurika has ended its games early in nine of the 10 games making it difficult to compile any impressive statistics. Waurika played into the third quarter for only the third time in 2018 against Cyril. Turner Mora, Colton Bryant, and Zac Brown will be counted on in the running game, but Kevin Garcia had one of his best games last week in the first-round victory over Cyril. Aaron Nitka has been a favorite target of Mora when the Eagles have gone to the air. The Eagles have played beyond halftime only three times in 10 games. The Eagles are averaging an astounding 53.4 points a game while giving up only 4.2 points a game.

Outlook: Waurika must come up with another outstanding defensive performance similar to last Friday’s impressive performance against Cyril. But, the Eagles have been dominant on defense most of the year. It should be strength against strength as both teams have been able to score lots of points throughout the season. The Eagles’ quickness on defense should be the determining factor and if Waurika is prepared to handle the offensive onslaught of the Chiefs, they should move on to the quarterfinal round of the Class B playoffs.