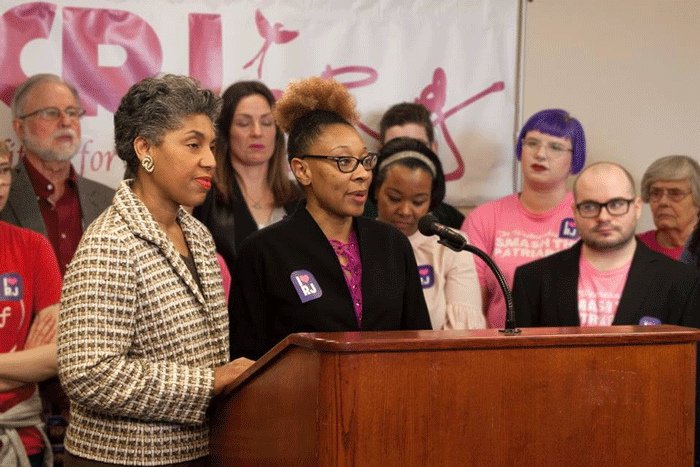 OKLAHOMA CITY– On Thursday Oklahoma Governor Mary Fallin signed into law reforms to health care for pregnant people in jails and prisons. The newly signed law will ban shackling women who give birth during incarceration, prevent dangerous restriction methods and provide a loved one or professional doula present during labor. Advocate for mothers in the justice system, and mother who herself served time in the justice system, D’Marria Monday headed up the effort to pass HB 3393. As a member of the National Council of Incarcerated and Formerly Incarcerated Women and Girls, Monday wanted to help end the atrocity and include Oklahoma in the national movement to end shackling. In the summer of 2017, Monday brought the issue of pregnancy care in prisons to her House Representative, Regina Goodwin, who then sponsored the bill on Monday’s behalf.

“Working to pass this legislation is more than just a passion project for me because I know how this legislation will change women’s lives and help keep babies healthy.” Said Monday, “A child that comes into this world under distress is at a disadvantage, and these babies are our futures.” Before the passage of this law, it was not explicitly illegal to shackle incarcerated women during birth and a number of women came forward with their own stories of shackled birth in prison as Monday organized this effort. The measure will protect the health and dignity of pregnant individuals behind bars, as well as increase safety for their babies. The new law will require the safest possible restraints for pregnant people, as a means of preventing falls which can lead to hemorrhaging and miscarriage. “I decided to take action because I can not let these atrocities happen to one more person.” Monday said about championing the bill, “When I brought this bill to my Representative, Regina Goodwin, I was so excited for the opportunity to pass this bill. The support my bill received has been heartwarming and it means so much to me now to see it signed by the Governor.” Health care and women’s advocates across the state are celebrating the passage of this bill. The reforms are poised to bolster respect and quality medical treatment for mothers and babies during incarceration.