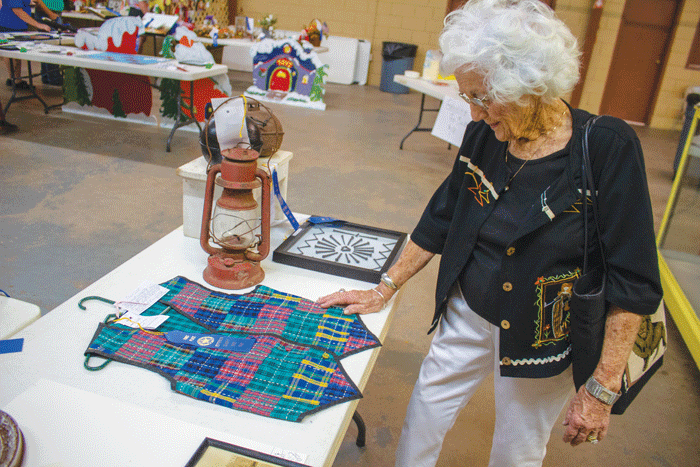 A look at Jefferson County’s Fair —according to the information that I’ve obtained.  The 1925 fair was held in Ryan, (So it has been going on in our county for 93 years!).

The very first county fair that I remember attending was held in Waurika, under the “Football

Now to fast forward to 2018 County Fair.  I want to personally Congratulate the three Extension County Educators for a tremendous job they did -working overtime to get all the “Fair Entries” labelled and in place – and they are: Tara Brown, Leland McDaniel, and Linda Goodwin.

This years Fair was the best (in my opinion) that we have had, in a long time!!!!

ACCORDING TO WAURIKA NEWS-DEMOCRAT, THURSDAY, AUGUST 15, 1985

This marks the 60th year of continuous fairs in Jefferson County.  Early fairs were held in 1919 and

1920, with a gap of five years before establishing a once-a-year show of Jefferson County exhibits.

The 1925 Fair was held in Ryan with a total budget of $1000 including premiums, judging and advertising.  We’ve come a long way to this point with our budget for judging alone almost as much as the total budget for the 1925 event.

The Pie Day Contest is to be held August 27 beginning at 11 a.m. Pies will be judged on flavor, texture

of crust, texture of filling and general appearance, individuals will enter pies in one of the following divisions: apple, cherry, peach, other fruit, pecan, chocolate, coconut, custard, lemon, pumpkin, cheesecake and other pies.

The aim of the contest is to recognize that person that has the greatest number of blue ribbons following judging.  If a tie exists, ribbons will be counted for each place until the tie is broken.

Shelton’s Grocery.  The Cotton Cooperative will also present the champion with an ice cream freezer (electric) and an enlargement of a color photo of the winner with the awards.

The Cookie Jar Contest will be held Tuesday. Just like the pie day, the judging will be based on

A trophy will be presented to the winning entrant by Shelton’s Grocery.  The Cotton Cooperative will also be presenting a space saver can opener and a color photo of winner with a cookie jar.

As a special treat to get viewers involved in these new contests, we are sponsoring a drawing for the Champion Cookie Jar.  So be sure to drop by the exhibit and sign up.  The drawing will be held Tuesday night at the lamb show.

For details on these and other contests, drop by the extension office to pick up a fair catalog or call the office at 228-2332.