Home News Jefferson County Residents Featured in “You Can’t Take it With You”. 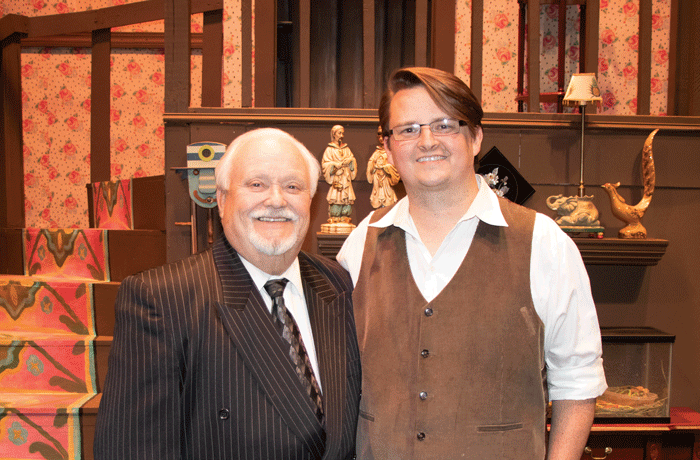 The latest production of the Duncan Little Theatre is a Pulitzer Prize winning play called You Can’t Take it With You written by George S. Kaufman and Moss Hart.

Many are probably familiar with the film version staring Jimmy Stewart and Lionel Barrymore.

The play is a hilarious comedy that was first performed on Broadway in 1936.

Carter Waid and Justin Sullivan are appearing in the play.

Waid will appear in the November 23rd performance as Mr. Kirby, a serious business man.

Waid is intrigued with his part. His participation in this production is as a fill-in for Derrick Miller who is both a producer and an actor in this play. He also plays Mr. Kirby. However, he has to absent on the 23rd, thus the reason Waid is filling in.

“Don’t let life get the better of you and steal your relationship with your family,” is Waid’s impression of the plays overall theme.

Waid has been performing plays with the Duncan Little Theatre for years. He really likes this play and believes audiences will love it.

Justin Sullivan appears in all the performance as Paul Sycamore, the man who manufactures fireworks in the basement.

Sullivan enjoys acting and particularly loves this play and its sentiment—money isn’t everything.

Like Waid, he too has been performing with the Theatre for many years.

Sharon Burum is the director for the play. Burum has a long history with Duncan Little Theatre. She was the Stage Manager for the play “Oklahoma”, which was the first large production performed at the Simmons Center.

Other cast members include:

Derrick Miller plays Mr. Kirby and serves as one of the producers of the play. He is currently teaching journalism at the Duncan Middle School. Before teaching, he was a reporter for the Duncan Banner for nine years.

Carra Spigner, plays the role of the prim and proper Mrs. Kirby. Her biggest challenge will be keeping a straight face.

Rick Rogers, an eighty-five year old practicing attorney in Duncan, is playing the role of the IRS agent. In his spare time, which is limited, he carves and serves on the City Appeals Board.

His wife, Carolyn is also performing in the play. Not only does she love performing, she started the Duncan Trust Authority and helps with beautification of Duncan.

Kathrine Farrow serves as the co-set designer along with Michael Harris. Farrow has a role as a ballerina dancer.

Floyd Wininger has been working with the Theatre since 1981. He has not only acted in plays, but he has also directed. In this production he is playing the role of Grandpa.

Opening night is this Friday evening, November 15, beginning at 7:30 pm.

Editor’s Note: A special thank you to Sharon Burum , the director, for allowing us to attend the rehearsal and take pictures as well as interview the cast.