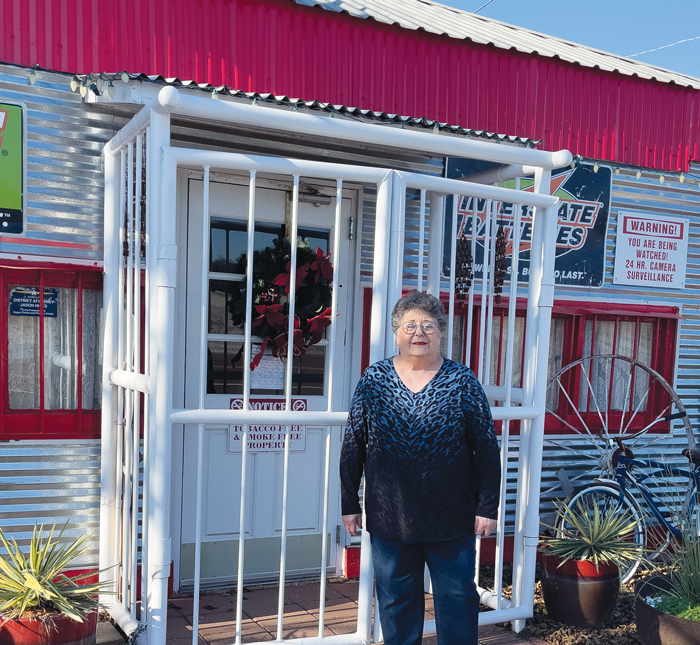 Editor’s Note: The Antique Station was founded by the Webb family. Both Mr. and Mrs. Webb went by the name Pat. For the purposes of this article, Mr. Webb will be referred to as Pat and Mrs. Webb as Patsy.

Pat and Patsy met in 1986 and then Married in 1997. Although it was their second marriage. They soon discovered they were made for each other.

“He was my soul mate,” Patsy says.

Pat was born and raised in Addington, so when the two married, they made Addington their home.

Pat had recently retired from his own business, E&W Construction, when he surprised her with a marriage proposal.

While they were dating, they had spent a lot of time on the road traveling to craft shows. During this time Patsy was still living in Marlow. One day, Pat came in and said he had worn out three pickups traveling between Addington and Marlow.

“Don’t you think it’s about time we get married?” That was his proposal.

Her reply was just as down to earth, “I expected a proposal at some point in time, but not like this. But yes, it’s about time.”

She says he was just what she needed. “He had a wonderful sense of humor.”

On July 2, 2005 they founded the Antique Station. They started the business on a wing and a prayer. Obviously, it paid off.

They rented the building from Charlie Harris.

Patsy and her friend Laura Thorn Jackson had been in business previously in Bowie, Texas. So she came up and helped. She brought her own antiques to sell in the store.

The original floor was an ugly tan brown. Pat took a bumpy roller and painted the interior a lite jadeite green. That set the tone for the business.

It wasn’t long before they began to outgrow the space they were using.

The only space available was the lobby of the original gas station. The old pilings from the gas pumps were still out front.

Charlie gave them permission to enclose the front and removed the pilings and cement from where the gas pumps had been. It was really hard work. They did it with sledge hammers and manual jack hammers.

By the following Sunday evening she took a car sponge and painted the interior and made it look like old bricks. He husband had some concerns when he first saw her artistic endeavors.

“Honey, I hate to tell you this,” he said. “But your bricks are all going down hill.” She politely responded, “It’s supposed to be an old building, get over it.” Together they laughed and made the best of it.

This was characteristic for them. They hit it off from the first time they met and always made the best of whatever situation they found themselves in.

Together, they were turning the Antique Station into a thriving business.

Pat loved to hunt down the antiques but he left the selling up to Patsy.

“I’ve been mad at him ever sense” she says. “That wasn’t in the plans.” She says it was really tough that first year without him.

Her friends from high school all showed up her first day back at work after the funeral and stayed with her the entire Saturday. Later that night they all went to Bill’s Catfish.

“It was great to have that support,” she remembers.

With the grace of God she continued to grow the business.

Later a tornado came through and tore some of the corner of the roof back. It exposed some of the glassware and other items to rain.

She called her son in law at the time, James Pass. He came up, along with her grandson Dallas, and was able to fix the roof with ease.

However, there was a lots of water still standing.

She says she is thankful she had insurance. They sent a company to come down and remove all the water.

Mark Childers and his wife Sherrie, who had been previous customers, joined her in the business venture in 2008.

It all started when he paid to fill her propane tank so she could have heat.

Later Mark had the idea of holding auctions in the old barn that wasn’t being used on the property.

Pat says she was always interested in antiques. She says it is her dad’s fault. Pat is the daughter of Richard and Pauline Sisk. They lived on a farm north of Marlow.

Before Patsy’s parents married, her dad had served in World War II and sent back items of value to his then “Pen Pal” Pauline (the same Pauline he would later marry).

Richard was with the 45th infantry and was a personal driver for Col. Cornish for while. Then later for Lt. ColbWalter Schlotzhauer.

One of the items sent back was a bedspread from Adolf Hitler’s bed. Other valuable items just happened to be antiques.

He also sent a Majolica Platter. He once told Patsy that “this is just stuff. If you ever get into trouble, you can sell it.”

That began her love for antiques.

She had a piece of pottery from Anzio, Italy, also sent by her dad.

Recently, she was able to sell it on Ebay and someone from Salerno bought it.

One of the heartbreaks of her life happened one day when she came home from college to find her mother had taken the antique family dining table to the dump.

She had done this because Richard, Patsy’s dad was a pioneer of irrigation submersible pump farming in the area and which brought in a surplus of income for the family. This inspired Patsy’s mother to want “new” furniture. It inspired Richard to buy the family their first new car, 1962 Ford Galaxy XL 500.

Poor Patsy was able to rescue a couple of chairs from the dump site but her beloved family table was too damaged for repair.

Now the family was stuck with the Harvest Gold dinning set. Patsy says it was the ugliest thing she had ever seen.

After graduation from Rush Springs, she attended Oklahoma College for Women at Chickasha.

While she was there it changed to COED and also changed the name (over her strong objections).

Melisa is an instructor at Teen Challenge. David is a Caterer.

The Antique Station has been her life for the past 17 years. She is so grateful to everyone who helped her and supported her in so many ways.

Recently Patsy sold the Antique Station to Mark and Sherie Childers. She wishes them the best and hopes the store will continue to grow and prosper.

A Labor of Love