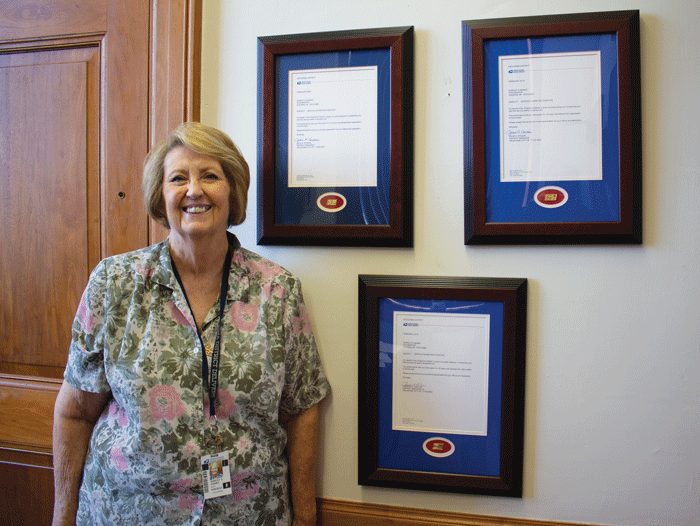 In her private office at the Waurika Post Office the walls are covered with framed recognitions for her commitment to the U.S. Post Office.

The latest one contains a framed recognition pin with a ruby setting congratulating her for 40 years of service.

Her first job with the postal service began years ago in Shelbyville, Missouri where she lived with her husband Kenneth. It was he who talked her into being a clerk in the post office there. That job only lasted for a short while.

However, when she moved back to Oklahoma she went to work for the Comanche post office and stayed 8 years.

After Comanche she applied for the Postmaster job in Mannsville and got it. Next, she went to Wilson as Postmaster.

She says it has been a great 40 years. Shirley has had a great life.

Shirley was born and raised in this part of the country. She grew up near where the Grandview school is now.

She met her late husband Kenneth on Valentines Day. He was serving at Ft. Sill at the time. They married six months later. One of their children was born on February 12th and the other born on the 14th.

Kenneth was from Missouri, thus the reason for them being there when Shirley found her first job for the post office.

She acknowledges that her faith in God has been important to her and has seen her through the years. She is also grateful for the people she works with, she has a good staff.

Forty years has gone by fast but they have been good years.