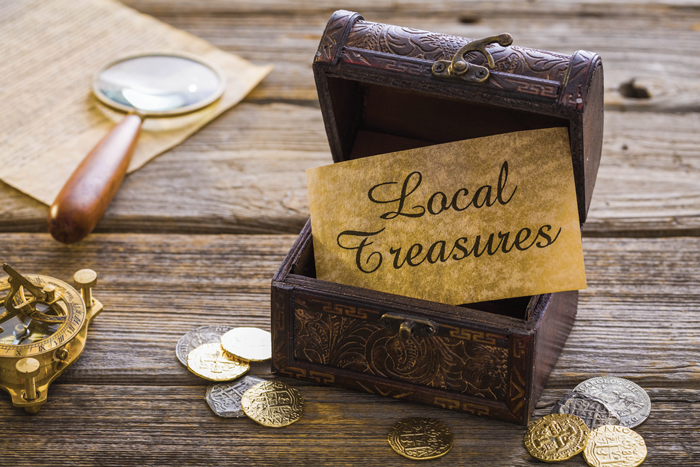 In the Fort Worth Gazette of November 3rd, 1984 , a story is related, as told to the correspondent by a Mr. John Schrock, proprietor of the Cowboy Saloon in Spanish Fort, of going across the Red River about two miles north of Spanish Fort with William Shackelford, Walton Crain, W.F. Cole and Sherman Joins to hunt a couple of panthers which had been seen a few days earlier on South Mud Creek. On returning to the river, their dogs jumped a panther which they chased into some rocks by a 50 foot bluff. They found an opening and discovered it led to a rock wall, then went left 20 feet through a layers of sandstone, about 40 feet wide and 130 feet lo0ng, with a ceiling about 15 feet high. A brass howitzer was at the entrance of the cave and inside were some animal bones, copper kettles and remains of wicker baskets, farm implements and saddles and also 6 boxes, each about 5 1/2’ by 2’ by 18”, which were filled with swords, blunderbusses, coats of mail and other matters. In one of the boxes, however, they found about 2 bushels of Spanish coins and bullion. There were gold doubloons and silver “rix” (Spanish) dollars and 3 silver bricks along with 2 gold crucifixes. (Note: there is no corroboration for this story found anywhere).

The area east of Spanish Fort, on the Oklahoma side of the Red River, was also the site of prehistoric Indian settlement, dating hundreds of years prior to European exploration. There is a location on the property of the Longest family, which was extensively explored by the University of Oklahoma and Southern Methodist University in Dallad. The Longest family has a private collection of artifacts, including arrowheads and other items, from their digs. Many farmers in the Petersburg and Courtney communities have found stone arrowheads, knives, spear points, axes an other artifacts, also.