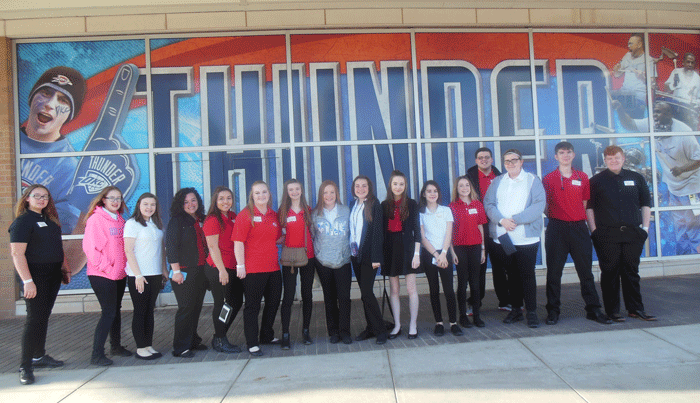 Sixteen members of Waurika FCCLA have recently returned from the 72nd annual Oklahoma State FCCLA Convention.  The meeting was held on April 12, 2018, in the Cox Convention Center in Oklahoma City. This year’s theme was “Leadership Land” and followed a “breaking news” newscast format.  Students received a great motivational message from well-known keynote speaker, Hoan Do. “He equipped the students with skills for keeping a positive attitude, defeating negative self-talk and flexing their courage muscle with his fun, uplifting ‘That was Whack’ talk”, according to Suzy Bruner, Waurika FCCLA Adviser.  Waurika students also attended a break-out session with Do where they mixed with other members and got practice refining goals.  FCCLA is a vocational student organization that is open to students who are taking, or have taken, a Family and Consumer Science class.  It focuses on personal and career development skills, such as leadership, decision making and character development.