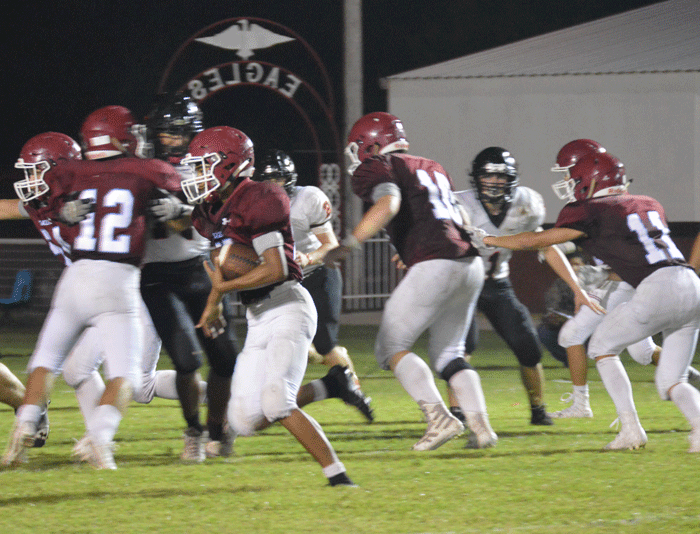 With seven games played in the 2018 season, Waurika has only played a full game one time.

That did not change last Thursday night as the Eagles pasted Central High, 52-0, in a key District B-4 contest at Cy Sloan Stadium.

Five of the six games for the season have ended at intermission because of the 45-point mercy rule.

The Eagles are 3-0 in District B-4 play and have a commanding hold on first place. The Bronchos are 1-2 and will have to right the ship to qualify for the playoffs.

Waurika will travel to Bray-Doyle tomorrow night for another district game against the Donkeys. Kickoff is set for 7:30 p.m.

In last Thursday’s encounter, the Eagles quickly got on the scoreboard as Colton Bryant scored from one yard out and ran for the two-point conversion to put Waurika in front, 8-0, just 44 seconds into the game.

On the ensuing kickoff, the Bronchos fumbled and the Eagles recovered. Mora scored from 27 yards out and then tossed to Aaron Nitka for the two points give Waurika a 24-0 advantage with 5:37 just 18 seconds after the previous score.

The Eagles got one more score before the end of the first quarter. Mora found Hunter Wesberry on a 44-yard touchdown pass. Bryant ran for the two points and Waurika was on top, 32-0, with 3:07 left in the first frame.

Early in the second quarter, the Eagles found the end zone again with Mora taking the pigskin in for the score from three yards out. The run failed, but Waurika held a 38-0 lead with 11:49 before the half.

Bryant got his second touchdown on the night as he busted loose for a 54-yard rushing score. The Eagle senior ran for the two points giving Waurika a 46-0 advantage with 5:29 left before intermission.

Zac Brown got in on the scoring act as he capped an Eagle drive with a 19-yard scoring run. The run failed, but Waurika had sealed the win with 2:00 remaining in the half.

EAGLE FLIGHTS: Waurika still trails in this short series with Central High, 3-2…..The 52 points scored by Waurika is the second most in games against Central High….The 52-point margin of victory is the largest for Waurika in the two wins….This was the first shutout Waurika has posted against the Bronchos in the five meetings…The 295 yards rushing by the Eagles equals the season-high total that was set against Wilson….This was the fifth time since beginning eight-man football that Waurika has recorded back-to-back games scoring 50 or more points….Waurika has now recorded five shutouts this season and with two games to go plus the playoffs has a chance to tie or break the school record of eight set in 1936, 1933 and 1928….Waurika recorded seven shutouts in 1989 and 1940 and six opponent shutouts in 1930 and 1934….The Eagles have also posted five shutouts in a season in 1927, 1939, 1945, 1950, 1959, 1969, 1981, 1988 and 1996….The six mercy-rule wins by Waurika is the most for any season since beginning eight-man play in 2012….Eight weeks into the season the Eagles finally found favor with at least one pollster as Waurika is ranked 14th in Class B by the website HS Football Oklahoma.