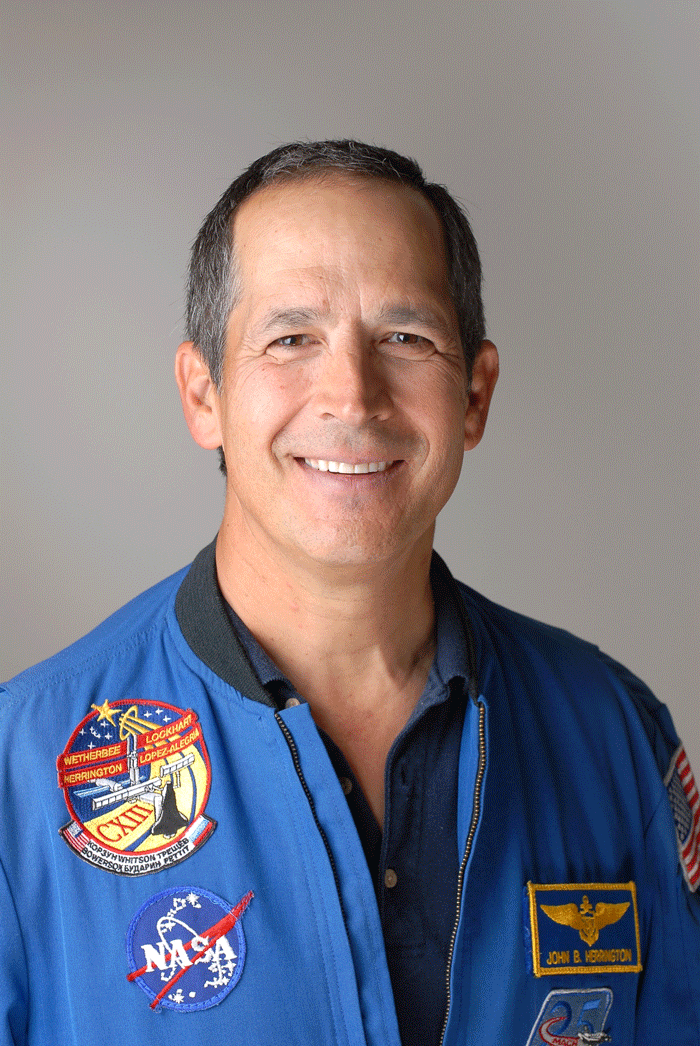 PHOENIX – Chickasaw astronaut John Herrington is among 12 individuals inducted into the inaugural class of the National Native American Hall of Fame. Induction ceremonies were Oct. 13 in Phoenix. Herrington, who was born in Wetumka, Oklahoma, is one of seven inductees from Oklahoma.

Herrington, the first enrolled citizen of a Native American Nation to fly into space, made a comparison between the induction ceremony and a 40th-anniversary celebration of the Apollo 10 mission.

“When I arrived I realized that I wasn’t just an observer, but a participant,” said Herrington. “I was seated alongside the folks that made history in the Apollo program and I was being included in their press conference. As my dad said, ‘I was walking in some pretty tall cotton!’

“I feel the same way about being inducted into the National Native American Hall of Fame. I was in the company of my heroes and people I have admired growing up.  That’s a very humbling feeling and one that I will cherish for the rest of my life.”

“While his accomplishments as an astronaut are impressive, what is perhaps even more impressive is what John Herrington has done to promote education,” Gov. Anoatubby said. “His commitment to promoting education has no doubt changed the lives of countless young Native Americans.”

During the STS-113 mission, he helped install an aluminum structure onto the International Space Station, giving him the opportunity to achieve his goal of “turning a wrench in space.”

That goal was inspired by his maternal grandfather, Cub Owens. Herrington singled out his mother Joyce, and her father when asked about his childhood Native American role models.

“He was an incredibly talented mechanic and I believe he could have taken apart a diesel engine and put it back together blindfolded,” Herrington said. “I used to watch him work on engines at the pump station he managed south of Wetumka, just off Hwy 75. Having only a grade school education he raised a remarkable family and took care of those he loved.”

After years of promoting education, Dr. Ed Galindo, a Native American instructor he met in Idaho during his bike ride inspired Herrington to continue his own. In 2014, Herrington earned a doctorate in education from the University of Idaho.

Herrington interviewed numerous successful Native students in STEM programs in Idaho to find why they were able to succeed.

“What it came down to is that they were saying it worked because of the hands-on learning. They could do stuff with their hands. They could see the practical nature of what they were doing, and they could tie it to their learning. And it was fun. They worked with their friends. They collaborated. It was this cooperative type of learning environment. And I realized that growing up, that is what worked for me.”

Herrington, a board member of the American Indian Science and Engineering Society, said increased membership in that organization is a good sign.

“This past September our conference in OKC had the largest enrollment in AISES history.  That tells me the word is getting out and more Native students are seeking out careers in science and engineering.  AISES is a fantastic organization and it provides a unique opportunity for Native students to connect with Native professionals and their employers.”

Part of President Barak Obama’s Generation Indigenous (Gen-I) initiative, the event was designed to provide American Indian and Alaska Native youth from across the country the opportunity to interact with senior Administration officials and the White House Council on Native American Affairs.

“The fact that this gathering is on a national stage and is supported at the highest level of our government, should give the students a strong indication that their thoughts and aspirations matter,” Herrington said at the time. “Regardless of the venue, my message to students is for them to believe they are capable of accomplishing great things in life. I believe the steeper the climb, the more satisfying the view from the top.

“If a little kid from rural Oklahoma can achieve his childhood dream of flying in space, these students should believe they are capable of achieving their dreams, whatever they may be,” he said. “It certainly doesn’t come easy, but every positive step forward along their life’s journey will improve their chances for success.”

Today, he continues that work of motivating Indian students and explaining how to help them become successful.

More information is available at www.nativehalloffame.org/.