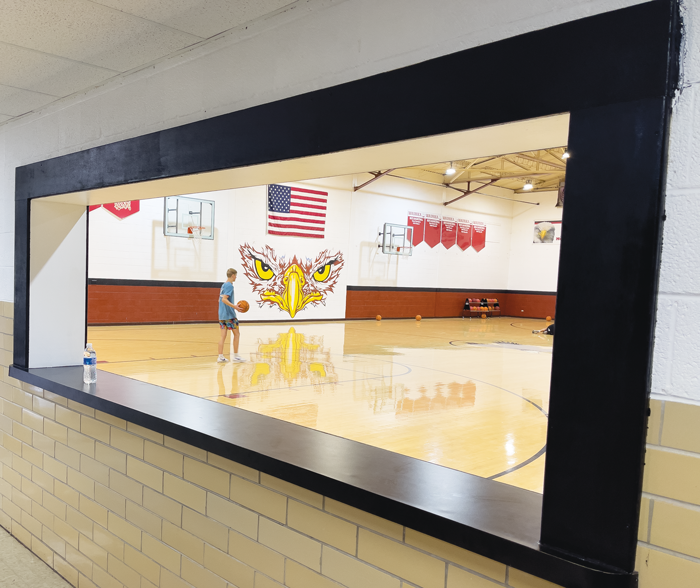 There is a wealth of optimism surrounding the Waurika boys’ and girls’ basketball programs for the upcoming season.

Waurika will open the hoops season Tuesday night when they travel down Highway 81 to battle Ryan.

The reason for optimism is warranted.

The Lady Eagles are coming off a 20-7 season a year ago and most of the key components of that squad return for the 2023 season.

And, the Lady Eagles are under the direction of first-year coach Garret Bachand, who served as an assistant a year ago and will enter his fourth season at the helm of the Waurika boys’ squad.

There is no shortage of optimism in the Eagles’ basketball camp – despite getting a late start with practices due to the extended football season.

The Eagles were only 6-17 a year ago, but will return leading scorer and all-conference performer Treyton Torrez. A healthy Torrez will allow the Eagles to compete with anyone on the schedule.

The bulk of the scoring and rebounding for the Eagles from a year ago returns for another season and the Eagles will have the benefit of Jake Smart, who transferred from Temple at the beginning of the school year and was the leading scorer for the Tigers last season.

Torrez and Smart will be counted on to provide the bulk of the offense according to Bachand.

“We have never had that (two scorers),” noted Bachand when discussing the upcoming campaign.

“If we want to be good, some guys will have to step up,” said Bachand. “Our guard play should be good on both ends of the floor.”

The Eagles will have a seasoned group of players, but will be lacking in size. However, Bachand does not think that will be much of a handicap since the Eagles compete in Class A.

“Our goal is to improve on last year’s record and get a few wins in the playoffs,” Bachand added.

The Eagles will have a tough task in overcoming Velma-Alma in the Oil Field Conference, but should be in contention for the Southern Eight title with Frederick and Big Pasture.

When speaking about the Lady Eagles’ upcoming season, Bachand is really excited.

“I expect our experience to carry us through regionals and into area and possibly more,” Bachand said.

The Lady Eagles enjoyed a 20-win season in 2022 for the first time since the 2017 season and the Lady Eagles will be in pursuit of their fifth straight winning season.

And, the reason for the optimism in the Lady Eagles’ camp is not only from last year’s success, but the fact a large number of players return from last year.

A good returning cast of experience will be available for Bachand to depend on.

Liberti Simmons will be counted on for scoring as she returns for her senior season. She was an all-conference selection by the Southern 8 Conference a year ago.

Cassidie Berry will provide the Lady Eagles with a strong presence on the inside. Berry was selected to last year’s Oil Field Conference all-conference squad and at times was unstoppable on the inside.

Lending a helping hand for the Lady Eagles will be Aubree Showalter on offense and Jasmine Henry on the defensive end of the floor.

“We should win a lot of games because of our experience,” noted Bachand. “We need Libby (Simmons) and Aubree (Showalter) to both score around 14 or 15 points a game and Cassidie (Berry) and Jasmine (Henry) to outrebound our opponents.”

“Our challenge will be how well the girls adjust to new schemes and to increase their basketball IQ,” the first-year coach said.

The Lady Eagles have 20 out for basketball and Bachand has seen some improvement during practices and scrimmages over the last few weeks.

“We got to scrimmage some bigger schools and it was good for us to go against them,” Bachand added.

Waurika will play in three tournaments during the season. They should provide great competition for the Waurika roundballers and prepare them for the post season.

The Lady Eagles should contend for the conference titles. Empire and Walters may be the biggest threats in the Oil Field Conference, while Geronimo and Frederick will vie with the Lady Eagles for top honors in the Southern Eight, according to Bachand.

In the season opener at Ryan, the teams will carry a big advantage in the series since 1988. The Lady Eagles have a 40-22 record against Ryan, while the Eagles hold a 37-27 record against the Cowboys.