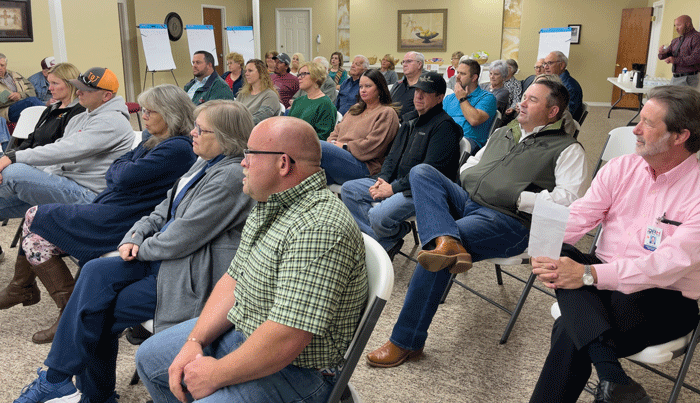 Last Thursday evening the Waurika Sorosis Club hosted Let’s Talk Waurika.  Rain and cold weather moved the meeting inside the Fellowship Hall of the Methodist Church, but did not dampen the enthusiasm for the presenters and the public forum after where attendees shared their visions for Parks and Recreation for Waurika.  “It was a great start to a much bigger conversation,” Sharon Duncan, project chairman stated. “Waurika has a beautiful landscape to work with and we are thrilled that so many came out and provided excellent ideas for the project.”  This is the fourth year that the Sorosis Club has sponsored the Let’s Talk Waurika event.

Cody Simmons, Waurika Public Schools Superintendent, was the first presenter and gave an excellent update on how the most recent bond issue had significantly helped the elementary, middle and high school campuses, the athletic fields, and provided technology upgrades that benefit all students.  He also provided an update on the on-going virtual learning plans for the school and also thanked the community for its continuous investment in our children.

Next up on the program was Richard Gillespie, President of Jefferson County Hospital.  Mr. Gillespie spoke about the improvements taking place at the hospital through the investment of Duncan Regional Hospital in our facility.  One of the main improvements is the air handling capabilities and air conditioning systems being added at this time.  These improvements allow patient rooms to have updated airflow that do not recycle the same air and replace the current hotel style units. This is a significant upgrade and will improve the overall patient care. There will also be a new backup generator installed. This upgrade will provide electrical power to the whole building. He also talked about the new rotation for Doctors from Duncan Regional Hospital who are now providing patient care for those patients in the skilled care wing of the hospital.  Gillespie said that one cent sales tax bond should be retired a little ahead of schedule. The $2,100,000 loan started in February of 2017 for seven years. The balance is now $843,000.  In closing, Mr. Gillespie thanked the Team at JCH for their dedication to providing exceptional quality care. He also thanked the community for their strong support of the hospital.

City Manager, Kyote Dunn, was next up on the program and he talked about how he was now almost three months into the job and was still learning, but is already working on a CDBG Grant to provide a major improvement and repair on Waurika’s Sewer System as well as several additional grants for various projects that he would like to pursue. The CDBG Grant will allow the City to perform much needed maintenance and repair on the City’s sewer system and will save the City almost $300,000.

Dunn also mentioned that he is pleased with the current path that Waurika is on and will work diligently with the community and various groups to continue pushing Waurika forward.

Jefferson County Commissioner for District One, Bryce Bohot, was next on the program.  He talked about the retirement of the Hospital Bond coming up in a couple of years and how our community needed to begin considering keeping that one cent sales tax to support Jefferson County.  He mentioned that we do not want to be consolidated with another county and lose the local presence of our government offices and that having the funds from the 1 cent sales tax go to the county, might help us avoid that happening.

At the conclusion of the four speakers, Brad Scott, former City Manager and community leader, lead a community forum on the vision for Waurika’s Parks and Recreation opportunities and what the group felt was the best use for our open spaces.  When the 50 plus attendees entered the meeting, they were asked to go to 7 stations where easels had questions about parks and recreational needs. The questions asked and the responses are listed below. Scott discussed the responses on the boards and talked about additional plans and ideas that were still in the concept stages.  When Scott was city manager, he started working with a small group of citizens to work on clean up projects and to come up with a three, five and longer-term plan for parks and recreation for the city.  This group has worked with Craig Williams from Williams Landscape in Lawton to assist his efforts with main street beautification, Sorosis Park updates and to maintain the flowers and flower beds at Veterans Park.  With the Sorosis Park project coming to conclusion soon, the group wanted to bring in more thoughts on what the community felt were the biggest needs to enhance Waurika as the best place to live, work and play.

Question One: “What is your favorite type of outdoor Recreation and fun?”. Responses: Green Space for open play for kids and families; walking, basketball, picnic areas, swimming/water play; walking, bicycling; hunting and fishing; and planting flowers.

Question Two: “Does Waurika need a Splash Pad and Where should it be located?”  We had 10 yes responses from the group and about 10 more from people who couldn’t attend, but asked to be included.  Responses to location were varied and equally divided between Harmon Park (close to the former golf course/clubhouse) and Centennial Park.  One concept presented was a splash pad in conjunction with a Water Park like Boomtown Bay.  We had one no because of water treatment issues.

Question Three: “Would you use a Walking/Fitness Trail through Harmon Park?”  Nine participants voted yes to this with one clarification about clearing the poison ivy first.

Question Four: “Would you enjoy a Par 3 golf course at Harmon Park?”  We had seven participants respond yes to this question with no negative votes.

Question Six: “What is your vision for using the clubhouse at the former golf course?”  Several mentions were made for a restaurant with a bar and grill, patio space, outdoor music venue, and a family gathering spot.

Question Seven: “When was your last visit to Harmon Park and what did you do?”  Responses:  Two years ago, took family pictures; five years ago, pictures; often for disc golf; 2 years ago, cleaning up brush; 1 month ago, to let kids and dogs run around; and pictures.

Scott wrapped up the meeting by making sure that people were aware that work continues on all the spaces and that the pavilion at Harmon Park was one example of work completed.  He also invited everyone to a community event and fundraiser on May 15 at 5:30 p.m. at Sorosis Park at D and Main.  Proceeds from this event will support continued beautification efforts.