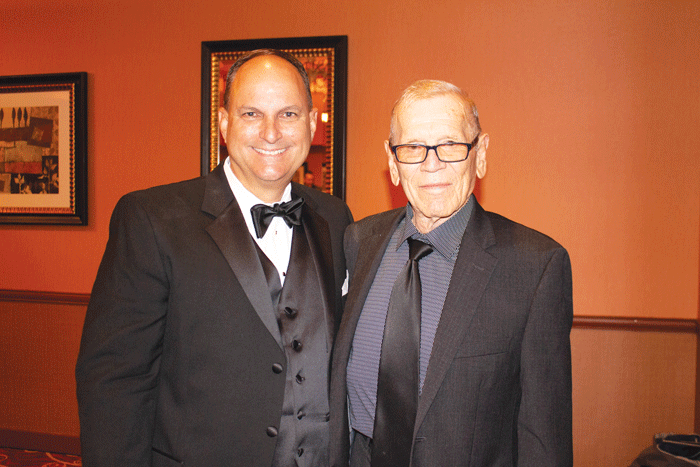 Monday evening, Richard Thorpe was recognized at the 2018 Induction Ceremony of the Oklahoma Sports Hall of Fame.

Thorpe is the son of legendary athlete Jim Thorpe.

The Thorpe family lends it’s name to the Oklahoma Sports Hall of Fame, which is housed at the Bricktown Ball Park.

This year the following athletes were inducted into the Hall of Fame:

Biographies of this year’s inductees:

Although he is from Fort Lauderdale, Florida and a graduate of Maryland, he has served the past 19 years as the Athletic Director for the University of Oklahoma.

During his tenure  not only has Oklahoma won many national championships and conference title, but the GPA and graduation rate of student athletes are at a record high.

Castiglione is credited for setting standards of ethical integrity under his tenure.

Under his leadership Oklahoma is one of the few self-sustaining departments nationally. Over the past 19 years they have finished each season in the black financially.

In 2009 he was named the National Athletic Director of the Year by Sports Business Journal.

He received the Abe Lemons/Paul Hanson Award for Sports Excellence from Oklahoma City University in 2014.

He is a native of Edmond, Oklahoma and is an icon in the sport of BMX Freestyle.

He is considered by some as the greatest Vert-ramp rider in the history of the sport.

Besides being a great athlete, he is also an accomplished business man.

At the age of 20 he started Hoffman Promotions (now Hoffman Sports Association) and Hoffman Bikes.

Matt founded and is the current President for the International BMX Freestyle Federation.

He was named the Oklahoma Lineman of the Year and High School all American following his Senior season.

Although he was born in Stillwater, Oklahoma, he chose to play college football at the University of Oklahoma.

Mendenhall started three of his four years playing for the Sooners.

He was a guard his sophomore year, a center his junior year and a tackle his senior year.

In 1999 the Daily Oklahoman named him to the All Century Oklahoma High School football Team.

He had a slow start in the NFL but eventually was picked up by the Baltimore Colts, a team he played for for 10 years and set a record with 118 consecutive starts at center from 1973 to 1980.

After retirement from the Colts he returned to Enid where he graduated high school to become the Area Director for Search Ministries and served with them for 31  years.

He was born sometime around 1871 in Travis County, Texas to Thomas Jefferson Pickett and Mary Virginia Elizabeth Gilbert Pickett.

With only a 5th grade education he went to work as a cowboy on a ranch.

It is said that he is the most famous African-American rodeo star and cowboy in American History.

Pickett is credited with inventing the rodeo sport of steer wrestling.

When Pickett began wrestling steers it was called “bulldogging”.

He would grab the horns and twist the neck of the steer and then bite its nose or lip to force it to the ground.

It was in 1907 when he moved his family to Ponca City, Oklahoma so he could work at the 101 Ranch. During this time he performed on the rodeo circuit and his fame grew.

Pickett passed away at the age of 61.

He was born and raised in Cleveland, Oklahoma.

Although his first love was baseball, he became an excellent football player and went on to become the greatest large school, high school football coach in Oklahoma’s history.

Trimble became the head coach of the Jenks Trojans in 1996.

During his first six seasons he coached the Trojans to six state titles.

He was born and raised in southern California but is grateful to have been an Oklahoma State Cowboy.

He was a 3-time All-American at OSU.

He had the NCAA-record 58-game hitting streak, breaking the previous record of 47.

Ventura also led in RBIs two years in a row.

He was drafted by the Chicago White Sox.

Ventura finished his rookie season with 123 hits in 150 games played.

The next season he earned his first of six Gold Glove Awards and earned a coveted spot on the A.L. All-Star team.

He stayed with the White Sox  until December 1998 when the New  York Mets signed him to a four-year deal.

Ventura eventually retired from the Los Angeles Dodgers in 2004.

At the age of three he moved with his family to Okemah where he became an all-district back before attending college at Northeastern State University in Tahlequah.

His coaching career began as an assistant at Fairfax, Oklahoma in 1971.

He spent two years as the head coach at Claremore, Oklahoma and then began his college coaching carrer at the University of Tulsa.

Coker served as an assistant at Ohio State, The University of Oklahoma, and Oklahoma State University.

From 1995 to 2000 he was the University of Miami offensive coordinator before taking over as the head coach.

In his first season he took the Hurricanes to a 12-0 record and the national championship.