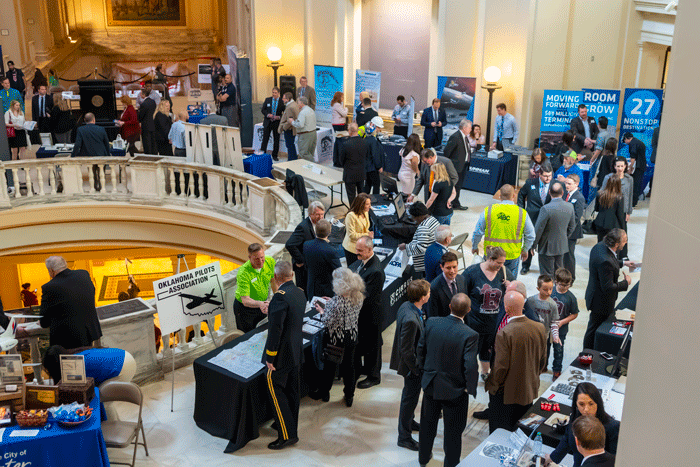 OKLAHOMA CITY – Although the hundred-year-old building was undergoing a major renovation complete with construction workers and heavy equipment and state lawmakers were experiencing possibly the most contentious session since statehood, the building and legislators came to a positive pause for a few hours to celebrate the robust aviation and aerospace community in Oklahoma.  The morning began with rolling carts, the clicking of dress shoes on stony marble, and the chatter of excitement as over sixty statewide and national exhibitors made their own personal land run for a place on the fourth and second floor rotundas.

The Oklahoma Aeronautics Commission has for many years, more on than off, hosted an aviation and aerospace advocacy day at the State Capitol during the regular session of the Oklahoma State Legislature. The day was newly branded as “AERO Oklahoma” Aviation & Aerospace Advocacy Day.  This year, the ten-person independent state agency, with no fear of construction or chaos, took on an innovative challenge expanding the program from one floor to four, tripling the number of exhibitors to 65, all while hosting a community-partner catered lunch that fed over 350 legislators, exhibitors and special guests. Simultaneously, two industry groups visited with over 30 legislators and the Speaker of the House, advocating not only for aerospace company interests, but also for the preservation and development of the state airport system.

The purpose of the event was, and in the future will be, to recognize Oklahoma’s aviation and aerospace industry as a vital economic engine for the state. As Oklahoma’s second largest industry, aviation has a significant impact on the lives of citizens. The event was a unique opportunity for Oklahoma military, aerospace companies, private and commercial pilots, airport managers, municipal officials, drone pilots, educators, flying clubs, and the many users of the Oklahoma Airport System to meet one-on-one with state legislators and other elected officials to remind them of Oklahoma’s strong aviation heritage and show them firsthand how the industry continues to solidify the state as a worldwide leader in aviation, aerospace, and aerospace and defense.

Prior to the start of the event, during morning legislative proceedings, exhibitors and attendees were recognized in the gallery by State Senator Paul Rosino, District 45, on behalf of his colleagues in the Oklahoma State Senate.  Then, with the sound of the “Governor’s Own” 145th Army Band brass section playing Oklahoma, exhibit booths opened mid-morning with attendees eager to hear the official address from Governor Mary Fallin as she welcomed the large crowd with remarks about the Aviation & Aerospace industry producing just under $44B in annual economic activity, supporting 206,000 jobs totaling an $11.7B payroll.  Lt. Gen. Lee K. Levy II, Air Force Sustainment Center commander, headquartered at Tinker Air Force Base in Oklahoma City, then spoke regarding the impact of military aviation with a $19.3B annual economic activity at the bases and installations in the state.

Late morning, among the Greco-Roman architecture on the Great Rotunda, the conclusion of formality was traded for intermittent laughter as children played with digital flight simulators and business men and women visited with one another and lawmakers about their role in the aerospace industry. Common sights were wide-eyed persons of all ages checking out detailed model aircraft and placing trinket-sized planes in their pockets. From colleges to airport consultants, if one had a booth on the rotunda that day, it would soon become the envy of marketing directors and corporate leaders across the state, if not the nation.

The Oklahoma Aviation & Aerospace Industry produces just under $44B in annual economic activity, making it the second largest economic engine in our state. Three segments account for the $44B total: military aviation, $19.3B; off-airport aviation and aerospace businesses, $13.9B; and the 109 commercial and general aviation airports, $10.6B.  Aviation & Aerospace supports 206,000 jobs totaling an $11.7B payroll. The average salary in the industry is $73,300 making it one of the highest average salaries in the state.