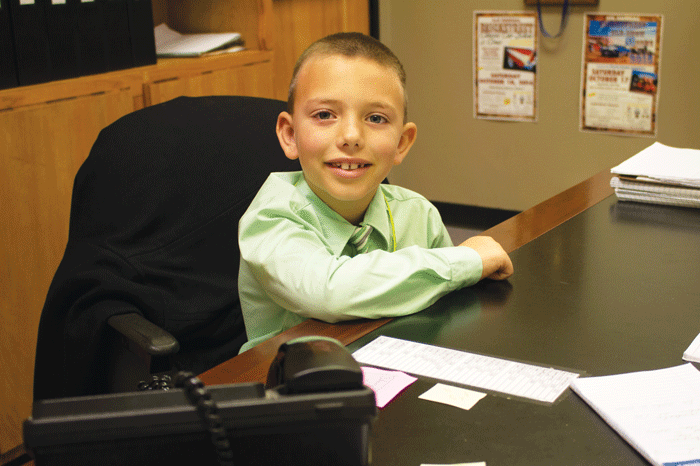 Ace Dyer served as “Principal” for a day this past Monday. He won the opportunity as a part of a drawing during the Elementary School Carnival.

Ace Dyer served as the Principal for the day Monday

It was the luck of the draw at the recent Elementary Carnival that allowed him to serve in the highest office of the Elementary School in Waurika.

It’s something that only happens once a  year.

Dyer said they began the day by greeting the kids with Principal and newly appointed Superintendent Cody Simmons.

After that they went to the gym and had Rise and Shine.

Dyer and Simmons then enjoyed a great breakfast together.

After their morning meal they went around looking at things that may need improvement at the school.

He said they looked for cracks in the walls and the condition of the ceiling tiles.

Dyer said he and Mr. Simmons had to go to the store to get a new radio.

Dyer looked comfortable setting behind the big desk. He was dressed in a pressed long sleeve shirt and a tie.

He is in the first grade and its his only time to ever get to serve as Principal for the day. Dyer said he was very lucky because this is the last year that Mr. Simmons will be the Elementary Principal.

When he grows up he may be a rancher and a principal. Although he said the principal has a lot of work to do.

At the end of the day they made announcements to all the students.

It was a great day for Dyer, it’s one he will never forget.